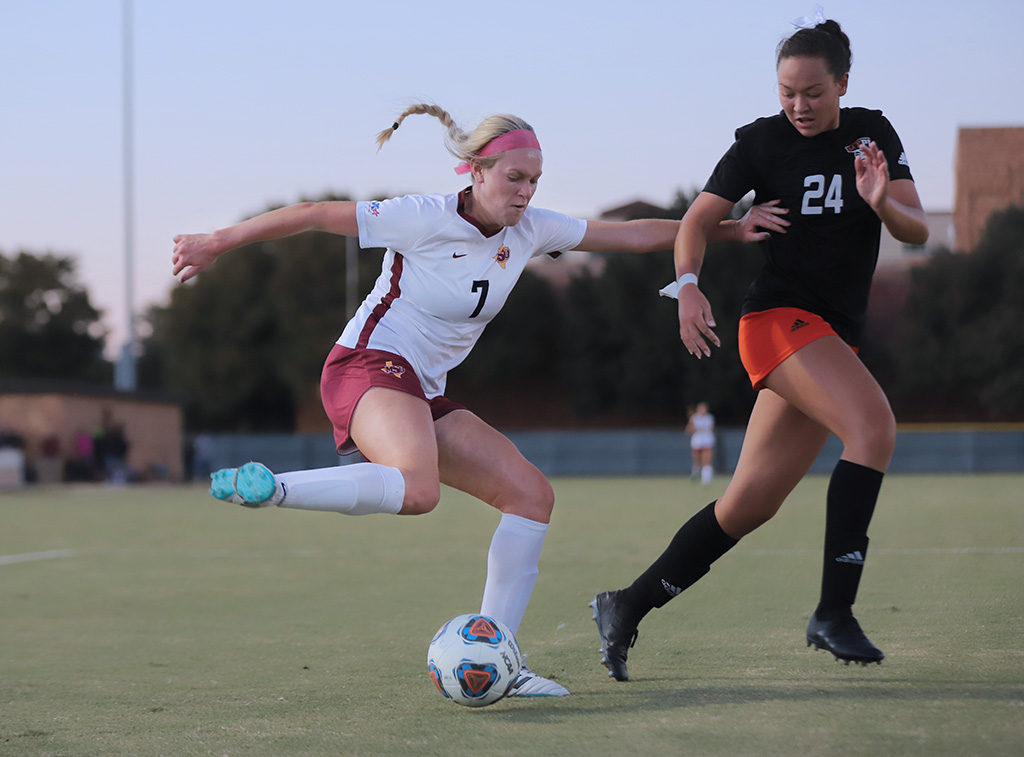 Early childhood education junior and forward fends off a UTPB defender to cross the ball to a teammate. Oct 26. Photo by Bridget Reilly (Bridget Reilly)

Early childhood education junior and forward fends off a UTPB defender to cross the ball to a teammate. Oct 26. Photo by Bridget Reilly

The girls scored all three of their goals in the first 45 minutes of the match. Nicole Marsolek (No. 2), defender and general business freshman, rocketed a high-arcing shot into the net from beyond the penalty area to get the score started. Emma Baley (No. 31), defender and undecided sophomore, added to the scoring total with a short goal. Kelly Cannistra (No. 8), midfielder and radiology junior, capped off the offensive performance by taking on the goalie herself and launching the ball into the back of the net.

“I think we came out with more energy and wanted it more,” Avery Lewis (No.7), forward and early childhood junior, said. “Scoring three goals really brought our confidence up.”

UTPB held the ‘Stangs scoreless in the second half despite the team’s 11 attempts to score and having eight additional corner kicks. Only nine of the team’s 22 shots were on goal.

“The other team came out fired up, and their pressure was really good,” Ryan Spence, head women’s soccer coach, said.

The shutout was the girls’ second clean sheet of the season. Their defense was led by goalkeepers Aubrey Pettett (No. 29), nursing sophomore, and Rebecca Vincent (No. 20), education freshman. Appearing in her first match of the year, Vincent recorded one save and didn’t allow a single goal.