Shane Jones, undecided sophomore, and Destiny Zynda, exercise physiology junior, are the first to finish at the MSU Cardboard Boat Race where students and organizations build a boat out of cardboard, and duck tape and race across Sikes Lake, Oct, 30, 2017. Photo by Francisco Martinez (Francisco Martinez)

Shane Jones, undecided sophomore, and Destiny Zynda, exercise physiology junior, are the first to finish at the MSU Cardboard Boat Race where students and organizations build a boat out of cardboard, and duck tape and race across Sikes Lake, Oct, 30, 2017. Photo by Francisco Martinez

Whether students are walking from class to class, future Mustangs are touring the campus or visitors are just driving by, the history and traditions of Midwestern State University are shown through the statues, street names, and the bricks on the buildings.

The campus was founded in 1922 as a local junior college and has grown to be a regional state university offering students a variety of academic programs in liberal and fine arts, mathematics, sciences, business and applied sciences. The university has become a campus of 255 acres and 70 buildings. The university, now with 6,102 students, has carried on a tradition of pride and community.

The name “Wichita Falls” originated from the first settlers of the area in the 1700s, the Choctaw Indians. The name “Wee-Chi-Tah” means “waist deep,” which was the description of the river they built their tribe around then.

In 1937 the college attained a new, 40 acre campus of its own located on the south side of town. The Hardin Building rose above pastures and wheat fields. In that year the college was renamed Hardin Junior College, in honor of Mr. and Mrs. John G. Hardin.

In January 1950, the name changed to Midwestern University, the junior college remained as Hardin Junior College.

Another change in the university’s status came Sept. 1, 1961, when the 56th Texas State Legislature made Midwestern University part of the Texas Colleges and Universities System. In 1975, the Texas Legislature changed the name to Midwestern State University.

From Indians to Mustangs

In 2006, the university changed its mascot from an Indian to a mustang named Maverick. The Indian served as the university’s mascot for 83 years before being retired.

The mascot changed because the National Collegiate Athletic Association deemed any “hostile” Native American mascot or logo as abuse to the Native American imagery and names. This resulted in changes made to the NCAA-sanctioned events, no longer allowing American Indian logos. But according to some Wichita Falls natives, American Indians in the area were not offended. In fact, they saw it as a compliment because they were being recognized as the ones who settled here first.

The campus still honors Native Americans with street names such as “Tomahawk” and “Tee-Pee,” and statues like the Sunwatcher that commemorates the university’s 75th anniversary and represents the South Plains Indians.

The Mustangs Sign is the configuration you make with your fingers during the singing of the Alma Mater or to identify yourself as a Mustang to other fellow Mustangs. With your two middle fingers bring them down to touch the tip of your thumb and extend the two remaining fingers up to make the Mustangs Sign.

MSU developed a tradition creating the same look for buildings on campus – all with “MSU brick” covering the exterior of the buildings.

However, that changed, when the only supplier of the brick stopped making it. 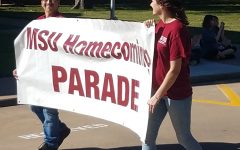 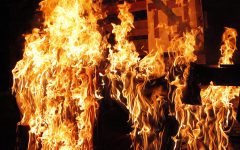 Homecoming tradition goes up in flames 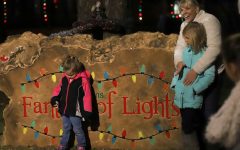 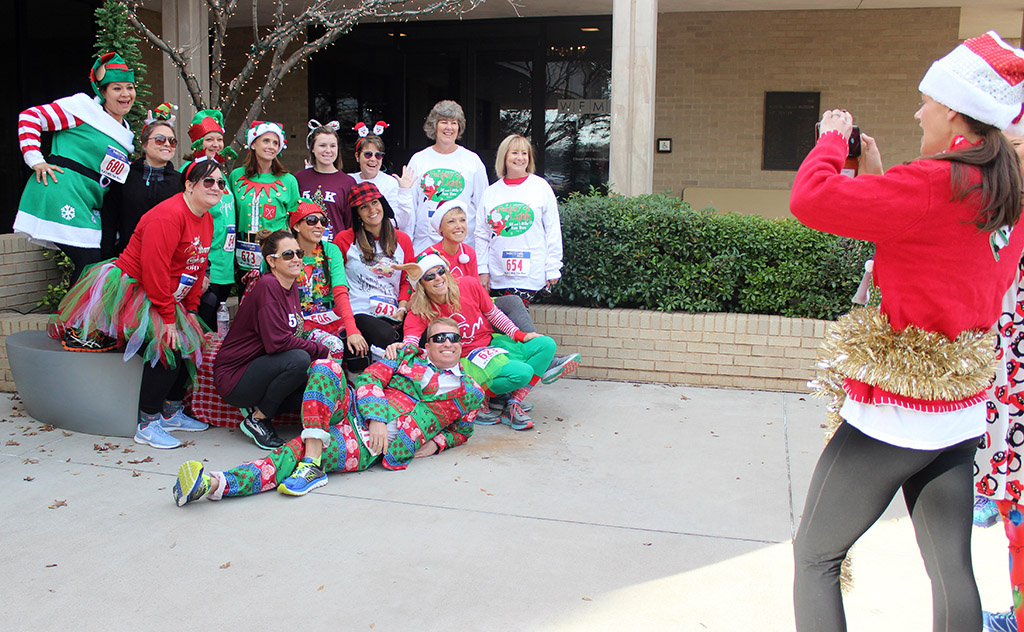 “There was a source for the original brick and then everybody basically quit making it,” Kyle Owen, associate vice president for facilities services, said.

But that didn’t stop the buildings from being covered in brick.

A company in Texas developed the MSU brick that was used for all campus buildings but over time the original materials used to make the brick ran out. In addition, Legacy Hall, the newest dorm building still resembles the other campus brick but isn’t the exact same.

“The brick adds a uniqueness to the campus, I hope future buildings will still match the other brick to keep the tradition going,” Savannah Lopez, social work freshman, said.

“There’s so many traditions during homecoming week. One of my favorite events was the lip sync battle. It’s my first semester here so it gave me a memorable first homecoming. The traditions bring people together, it helps with meeting new people especially being new to the campus. Homecoming helped me bring out my school spirit,” Lopez said.

The homecoming cardboard boat race is one of the annual events where student organizations attempt to construct a boat made of cardboards. Students race the boats across Sikes Lake. Following the boat races, the Kiowa Kooks, a group of alumni cooks, host the Fish Fry event.

“The cardboard race is probably my favorite thing to do on campus,” Daycee Duncan, computer science junior, said. 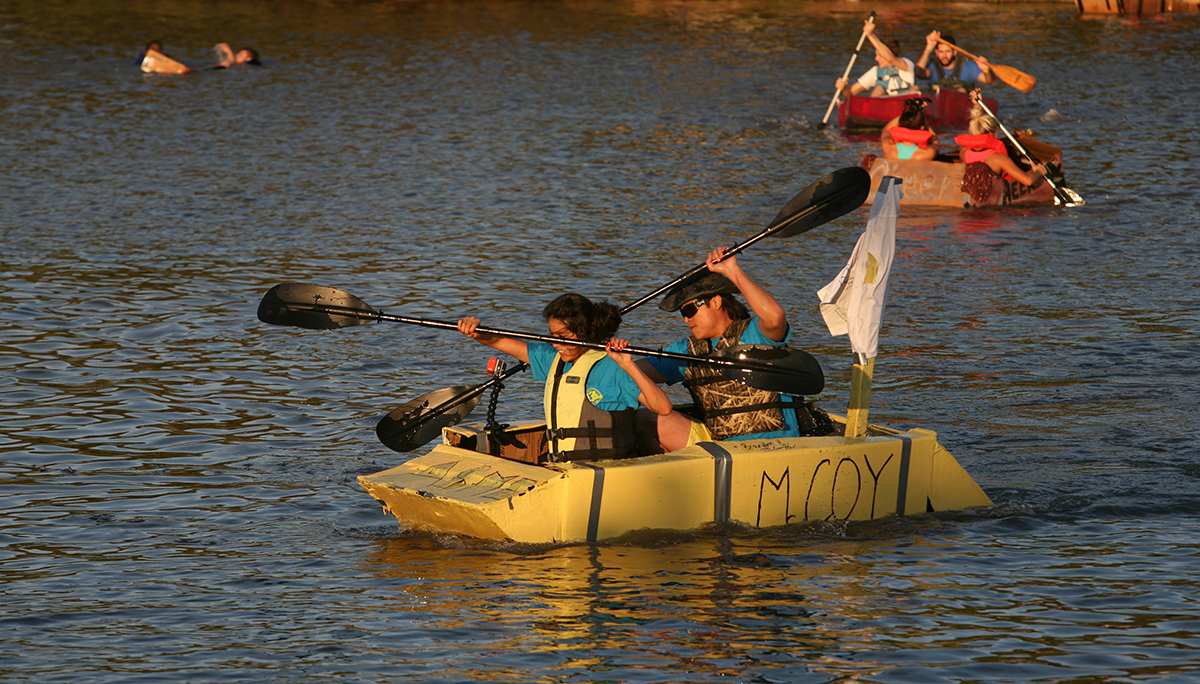 Students that participate in the boat race can only use duct tape and cardboard to make the boat. They have to strategize with the people in the boat to make it across without sinking.

“I’m a very competitive person and I would have to say it requires some skill to complete. It requires skill in math to come up with a design that floats, it requires people to be able to work together to construct it accurately while still having fun, and it requires someone to know how to row a boat. That doesn’t stop people from participating because the skills are easy to pick up on and after all it’s just something to do for fun!” Duncan said.

“My favorite tradition so far is the bonfire,” Madison Orth, management freshman, said. “It was a lot of fun getting to experience my first homecoming bonfire. Trading in another university’s T-shirt was a cool detail.”

A torchlight march is held before the bonfire where students can join in. Walking around campus holding lit candles with their peers, students follow the marching band as it makes its way to the bonfire pep rally.

Starting in the late 1920’s, the Burns family of Wichita Falls began their first Christmas celebration by setting up a small Christmas tree on their front porch with one single bulb. As the years passed and Mr. Burns became more successful in the oil industry, the couple was able to add onto their tradition. Each year they would add a new display to the whole scenery.

In 1954, Mr. Burns died in a car accident, but Mrs. Burns continued the tradition in memory of her husband. From 1954 to 1970, during the Christmas season, Mrs. Burns would turn her front lawn into an animated display with brightly-colored lights. At that point, the display had become so large and detailed that Mrs. Burns had to hire help to maintain it every year

In 1971, Mrs. Burns passed away, and the display was discontinued. In her will she left the decorations to her son, or he could donate it to Archer City. However, the display remained in storage for the next three years until the death of the her son. Archer City offered the display to MSU as long as it was operated to the public free of charge.

When MSU received the display, it did not have the funding to run and maintain it, so the Fantasy of Lights Committee was formed, making the MSU-Burns Fantasy of Lights a success that is still in practice today. Volunteers from the university, local citizens and airmen from Sheppard Air Force Base all contributed to the maintenance of the display in order to have it ready for its 1974 appearance.

Now every year the lights are set up on the Hardin building front lawn, along Taft Blvd. Volunteers help out with painting and setting up the lights. Students, alumni, and families can walk around to see the different festive Christmas decorations. Officially, there are 42 displays as of this year with the addition of three displays this year.

To congratulate seniors before they graduate, Provost James Johnston started the Senior Walk in 2018. It reminds the students of the places they have been through and people they have met before going off into their careers. The Student Alumni Council Association partners up with Johnston to help make the new tradition happen.

Ruby Arriaga, student activities coordinator and student alumni council association adviser, said, “The purpose of the Senior Walk is for the seniors to do their last walk around campus. They’ll meet in the Quad, then Dr. Johnston will talk to the students and explain the Senior Walk, and then they will walk together to their respective colleges. They get to visit the cheering faculty and staff, and have mini celebrations throughout the campus.”

Johnston said he is trying to establish the walk around campus as a tradition including brief congratulations from the deans of each college as the seniors walked around campus led by a police escort.

Around 200 seniors will take the Senior Walk on May 10 this year.