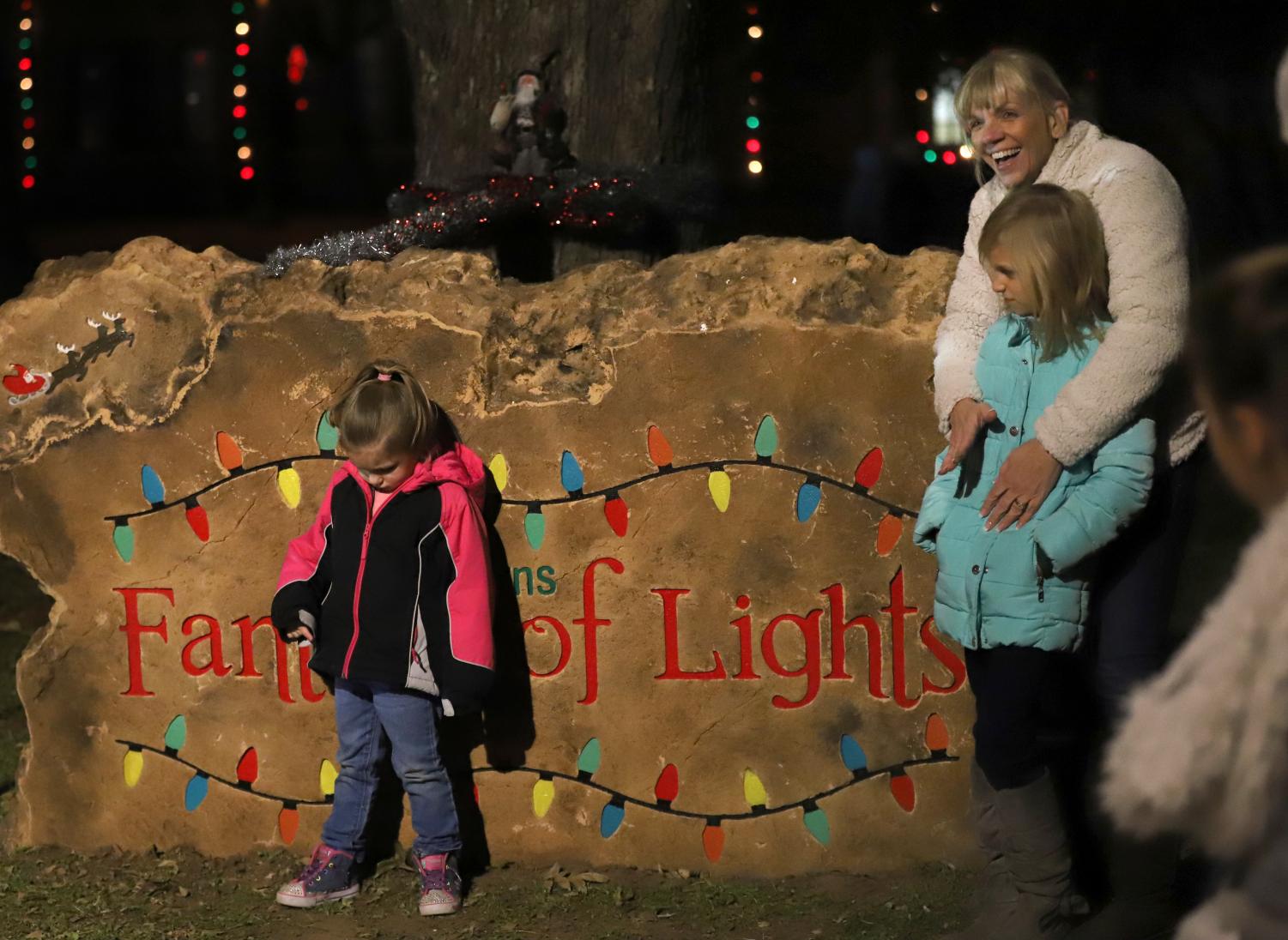 Annabell Bukowski stands in front of “The Rock of FOL” while her mom and sister, Ella, smile at the display sponsored by Boulder Design which was new this year. Photo by (Nathan Martinez)

Annabell Bukowski stands in front of “The Rock of FOL” while her mom and sister, Ella, smile at the display sponsored by Boulder Design which was new this year. Photo by 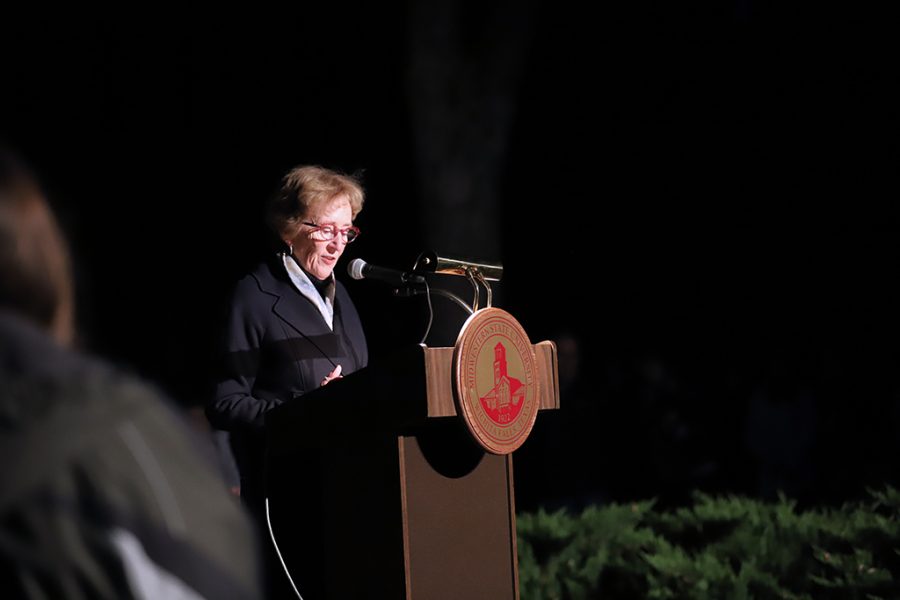 The MSU-Burns Fantasy of Lights originally began in the 1920’s as a collection of decorations on a newly-wed’s lawn, became a way to spread holiday cheer to thousands of people who visit the showcase.

Dirk Welch, MSU-Burns FOL coordinator, said, “Its [Fantasy Of Lights] purpose is to provide a festive holiday atmosphere on campus, to serve as an outreach to the community, and to be a focal point for the holiday activities in North Texas.”

This is the 44th year that Midwestern State University has hosted the MSU-Burns Fantasy of Lights displays on the Hardin building front lawn, along Taft Blvd.

Officially, there are 42 displays as of this year with the addition of three displays this year alone. Be sure to check out the newest additions – The Rock of FOL, Toy Soldiers and Santa’s chair (which will feature a real-life Santa).

Along with the displays, there are also areas with strings of lights and Christmas tress that can be “adopted,” funded by various donors. There are 20,000 lights and 100 trees, that light up the buildings along Taft Blvd.

The lights and displays turn on every evening at dusk (each evening will be different), the lights will also turn on during the day from 9 a.m. to 2 p.m. Tuesdays and Wednesdays for touring primary school children.

This year, a new part of the showcase will be introduced, Burnie the Elf, who received 51 percent of votes for naming the character via the FOL Facebook page and a play on the Burns family name, will appear in a new location each night throughout the showcase season in order to further boost interactivity with the showcase.

Frosty’s Friends and Christmas Village are both photo op points along the showcase trail.

“In the late 1920’s, the recently married Mr. and Mrs. L.T. Burns celebrated their first Christmas together in their modest home on 10th Street in Wichita Falls by setting a small Christmas tree on their front porch and decorating it with a single, blue bulb. It was a small gesture, but an extremely meaningful one for the young couple, especially Mr. Burns, who grew up in a family unable to afford such luxuries as Christmas trees.

As the years passed and Mr. Burns became more successful in the oil industry, the couple continued the tradition they began that first Christmas. Each year they set up a display of some kind, and each year the display became a little more elaborate than the year before.

In May 1971 Mrs. Burns, who had brought joy to so many people, died and the display was discontinued. In her will she stipulated that her son could keep the display or leave it to the care of Archer City, where many employees of the Burns estate lived and worked. The display remained in storage for the next three years.

Following the death of Mrs. Burns’ son in 1974, Archer City offered the display to Midwestern State University on the condition that the display be operated free to the public as a memorial to Mrs. Burns. Because MSU did not have the funds necessary to operate and maintain such an enormous project, a nonprofit Fantasy of Lights Committee was formed to raise the thousands of dollars needed to buy paint, equipment and materials needed to restore the display and prepare for its exhibition during the 1974 Christmas season. A volunteer force of local townspeople, MSU students, faculty and staff, and airmen from Sheppard Air Force Base, spent many long hours repairing and restoring each scene.

On Dec. 4, 1974, the master switch was thrown and the MSU-Burns Fantasy of Lights became a reality.

The MSU-Burns Fantasy of Lights is one of the largest holidays displays of its kind. Its purpose is to provide a festive holiday atmosphere on campus, to serve as an outreach to the community, and to be a focal point for the holiday activities in North Texas.

The displays are owned and operated by Midwestern State University for the benefit and enjoyment of the Wichita Falls community and surrounding area.” (Welch, Story of MSU-Burns FOL)

With this large of a showcase, all the displays need a safe place to rest for the other 324 days of the year; the displays are held in the Jan Thacker Fantasy of Lights Workshop.

The warehouse underwent a expansion to comfortably accommodate the displays during the year. The expansion added an extra 4,000 sq. ft. and was finished in January 2018.

Welch said, “We were excited to expand the Jan Thacker warehouse through donations, we needed…[the] additional 4,000 [sq. ft] has allowed us to store the displays comfortably and has given us the opportunity to expand the collection of displays in the future.”

An annual work day is held to freshen up the displays for the showcase, assess any damages from use or weather and occasionally add a fresh layer of paint if need be.

Welch said, “Merry Christmas to All is an original display from the 1970s showcases that needed serious repairs and repainting.”

This year’s work day was held on Sept. 29, around 200 community members, including some MSU students, painted and repaired displays to get them ready for the opening ceremony.

“Typically, the displays are positioned in the same location each season.  As new displays are added, a few will be moved around to accommodate the new additions.  Much forethought is put into the location of each display,” said Welch.

The MSU Facilities Services Team (grounds, electrical and carpentry) headed by Armando Muniz, grounds maintenance superintendent, set up, maintain and take down the displays as well as control the electrical set-up each year.

The Elf Band, Humpty Dumpty and the Guard Shack are sound hubs that also house electrical wires so the wires are not visible or in the way.

Welch said, “I’ve seen everything, from wedding proposals to magical moments where peoples faces light up, I’ve even met people who came from Taiwan to see the showcase.”

Leslie Alvarado, bilingual education, junior, “I love the Fantasy of Lights. It’s the best time of the year. Everyone is so cheerful and festive during this time of year.”

Steven Elhert, criminal justice, senior, “It’s a great experience. I love the tradition, how it brings the community and school together.”

Oneida Mireles, business management, junior “I had one of my first dates there and it was a magical as any freshman girl would hope.”

Reese Crosby, sociology, sophomore “Just a magical place to be at. You walk around and it feels like you’re walking through your childhood again.”

Carlie Hughes, alumni, “I really enjoyed being able to look at the displays that have been there from the beginning to the newest ones. It’s nice to be able to see the history of the event and be able to see how far we’ve come…The experience is just beautiful in general. ”

Taryn Beauchamp, alumni, “Fantasy of Lights is always something I look forward to. It’s part of my ritual for starting the Christmas season.”

Julie Gaffney, alumni, “I go every year with my parents, my mom remembers going to the Burns house as a girl scout. For me it’s been really neat seeing it [the showcase] grow over the years, my favorite display is the Robot.”

Although the displays, lights and choirs of people singing are located on MSU’s front lawn, MSU does not actually sponsor the annual showcase. Numerous donors fund the showcase.

“Expenses vary from year to year. All expenses are paid for by the donations received each season. It takes virtually every penny raised to refurbish, maintain and showcase the displays [each year],” said Welch. “For the last two years…expenses have totaled in the low 90k’s with donations support totaling in the low 90k’s.”

Other funding sources include online or in person donations, the annual Boot Collection, most displays are adopted by a person or group and the 5k & 1 Mile Fun Run.

Along with the lights and display showcase, through out the season there will be performances from elementary school choirs and bands, as well as the MSU choir and band.

Welch said, “Over the past two years, Fain Elementary has adopted the MSU-Burns FOL as project based learning, they hosted a spirit night at Chik-fil-A, fundraisers and last year first graders even got to meet Becky Burns-Johnson, the granddaughter of the original Burns Family.”

The Polar Express which is located in the parking lot of the Hardin building, takes visitors around the showcase. Students get in free Sunday through Thursday with a valid student ID. Otherwise it is $5/person. The Polar Express runs Nov. 22 through Dec. 25.

A new animatronic display, by the Toys Christmas creator Paul Ernst, will make its debut during the MSU-Burns Fantasy of Lights 2019 season.