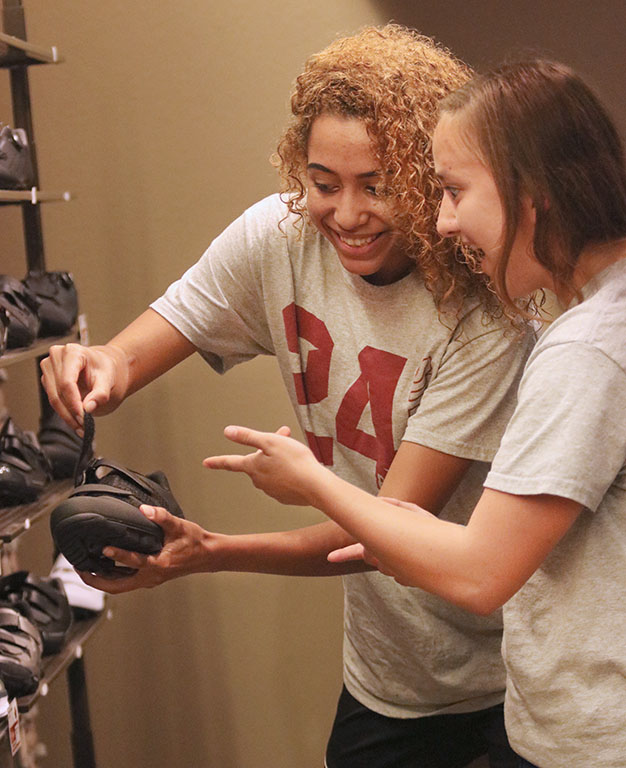 As a part of 24 strong week honoring late cornerback Robert Grays who died one year ago, the cross country and track team donated gently used shoes to Endurance House. Throughout the week, the athletics department have participated in a week long “24 acts of service” by giving back to the community to doing 24 push ups in honor of Grays’ retired jersey number.

Mike Pinnson, owner of endurance house, said the store started collecting shoes after his son Hunter noticed a homeless man on the side of the road with duct tape on his shoes. They have been collecting shoes for about two months. Then they were recently contacted by local schools that they had students who did not have any shoes.

“So we’ve probably given 20 pairs of shoes now so far and we just started a few weeks ago. As long as the principal and administrators continue to give us requests, we’ll continue fulfilling them,” Pinson said. “I think it’s important that all students come in to our community really help out and do their part weather they lived her their whole life or just coming in: It teaches these kids that it’s okay to give back.”

“Endurance House does so much for us, our way to help back for their cause. Every kid should have a pair of shoes,” Styles said.

Hannah Ponder, kinesiology sophomore, agrees saying cross country and track wanted to choose a service they were passionate about.

“A lot of us could have benefited from something like this when we were starting out in the sport,” Ponder said.

Mercy Yermo, kinesiology junior, said choosing the Endurance House donation went hand in hand with being 24 strong because part of the impact Robert Grays’ life had was through his sport.

“By donating our running shoes to high school and middle school kids, we get to just know that they will wear shoes that we’ve run all of our miles in, and hope it brings them a little bit of joy.” Yermo said. “The celebration of Rob’s life goes from the sport he played all the way to the kindness and love he had for people, and although donating shoes is just a small thing, we hope it brings some smiles to other kids out there.”