About 400 students and athletes came together to do 24 pushups in remembrance Robert Grays. (Angel Ukwitegyetse)

About 400 students and athletes came together to do 24 pushups in remembrance Robert Grays.

It has been one year since cornerback and general business sophomore Robert Grays died on Sept. 19 from sustaining a C1-C2 spinal injury. To honor Grays, about 400 students and athletes participated in doing 24 push. Bill Maskill, head football coach, said he was satisfied with the turnout. There was also a balloon release.

“It was a good event you know? And it was generated by our student athletes, our football players. 24 strong is the week, everybody [in the athletic department] is doing a community service, our football team wanted to do something that they could recognize that would relate to them. So, they put it [the idea] in front of the team the other day that ‘How about if we invited by tweet by handing out pieces of paper inviting the student body and faculty to come out and do 24 push ups with us after practice,”  Maskill said.

“I didn’t really know Robert Grays but, I’m here to support everybody out here that did know him.”| Annette Dukes, special education senior

“He was somebody that had an unfortunate tragedy, although I didn’t know him personally I still think its important to honor him” | D’monte Harris, healthcare administration junior

“I had a burden in my heart for Rob’s parents this morning, so I wanted to remind everyone that we aren’t the only ones hurting, they’re hurting too.” | Bob McCartney, pastor of First Baptist

“He was everything we could’ve asked for in a player. He always did his work, came to practice and never complained.” “its always a tuff blow to lose someone so young in life in general” | Cedric Leonard, graduate assistant defensive line coach

“I just want to pay my respects” “I just felt it was necessary ’cause he lost his life doing this, so to honor him…why not.” “I just think it’s important of people to remember this is a dangerous game and these are peoples name that are on the line” | Jashona Bracher, psychology freshman

“This is the first big lost that we ever had on campus. He was such a positive person and everybody has such great things to say about him so I think its important for him to be remembered.” | Hannah King, psychology senior

“I was his athletic trainer for his freshman and sophomore year so we were really close. The remembrance of him is important to honor him” | Naomi Alexander, sports administration graduate student

“I’m here to support Rob, I didn’t personally know him but I have seen how this has affected everyone so I just wanted to show my support.” | Kate Lynn, psychology sophomore

“He was a great young man, he had great qualities and were not ever going to forget him here at Midwestern” | Lexi Read, marketing junior

“As an athletic community, it hit us really hard and as a family we have to all support each other through this time.” | Hannah Reynolds exercise physiology sophomore

“I know Rob had a huge impact on everybody here so I know [for] me including everyone else, it just brings the whole student body together, to come together as a school. Our hearts bonded together. I think coming here to represent him and in memorial of him is something really special to us. I know we think about him every day, this is just something to let everyone else know, maybe the new people or freshman, [to] pass on the word of how good of a guy he was and how much he really meant to us.” | Taylor Brintzenhoff, psychology senior 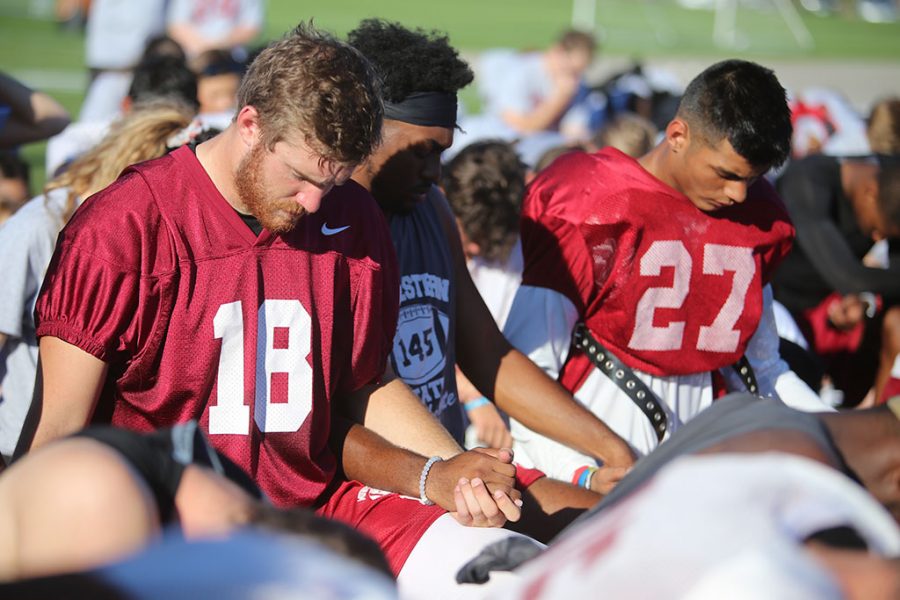 Gallery|7 Photos
Bradley Wilson
Layton Rabb, quarterback and a senior in accounting, prays after football practice Sept. 19, 2018. The team had 24 seconds of silence in honor of Robert Grays who died in a football accident last fall. Photo by Bradley Wilson

Watch @MWSUFootball and students do 24 push-ups on the practice field in honor of Robert Grays #24strong pic.twitter.com/vDzGa7xfcZ