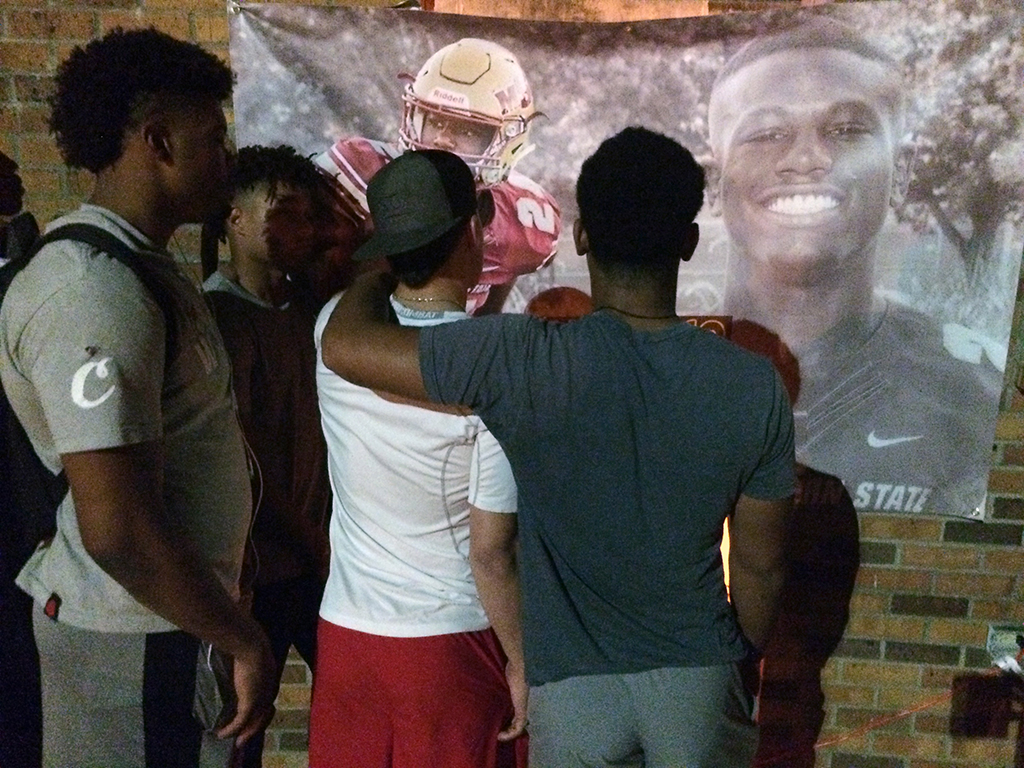 Campus reflects on Grays’ values with week of service

In remembrance of Robert Grays’ death last year, students and officials dedicated the week to him.

On Sept. 19, one year after Grays died in a football-related accident, the football players invited students and the people of Wichita Falls to come out to the practice field and do 24 pushups in remembrance of the late cornerback, No. 24. The football team does 24 pushups every day after practice and games.

“We see them do the pushups everyday but it was different today. It was very heartwarming, very remarkable and touching to see all the people out here for Rob. He made a really big impact on the team and the coaching staff,” Cayla Perez, athletic training sophomore, said.

The football team continues to show their love for Grays after a year of his death. After every game and practice, they perform 24 pushups in his honor. Texas A&M Commerce players also did 24 pushups. When the team runs out on the field at the beginning of each game, some players hold Grays’ jersey in hand at the front of the stampede.

“Even though he’s gone, we haven’t forgotten about him,” Alonzo Burris, exercise physiology senior, said.

Grays left a lasting impression on the school and its students. The student-athletes of the athletic programs volunteered their time to perform 24 acts of kindness around the community.

“24 Strong Week is a great way for the school to honor Rob in a positive manner. Community service is something that Rob would definitely do if he was still alive. We all are just trying to live our lives like he did. Robert was caring, loving, and god fearing,” Edwin Bah, criminal justice senior, said.

The football players kicked off the week by volunteering their time with the students at Zundy Elementary and also spent some time with the kids from Notre Dame schools as they participated in the “Golden Shoes” jog-a-thon.

“I had a great experience with the kids and I would do it again at anytime. I loved making the kids smile and start their day off right. It meant a lot and just being a positive influence to them. 24 strong week allowed us to touch peoples lives and change them through kindness,” Sir’Vell Ford, criminal justice senior, said.

The cross country and track runners went to Endurance House Sept. 21 to donate new and used shoes. The bike store has been collecting shoes for about two months. Mike Pinson, owner of endurance house, said the store started collecting shoes after his son Hunter noticed a homeless man on the side of the road with duct tape on his shoes. Pinson said they were contacted by local schools that had students who did not have any shoes.

“It’s important for the students to give back to their community. It’s really helping out that the girls are giving back, and it teaches the kids to give back,” Mark Pinson, Endurance House owner, said.

The volleyball team played with the kids at Notre Dame Catholic School and also showed their gratitude to their trainers by making 24 gift bags filled with snacks.

“This week is a reflection on Robert Grays’ character, we are honoring and sharing his character by doing kind things he would have done and we are trying to make the community better at the same time and he inspired us for the better,” Jaycie Fuller, biology pre-med sophomore, said.

“This week was special to us, we were able give back to some people that are very supportive of us,” Clayton Meyers, marketing senior, said. “We also got to spend some time with handicapped students from Rider High School at the museum. It was an amazing experience that opened our eyes.”

“The kids enjoyed playing with us and the team was so happy to play with them. I would love to go back and build a relationship with the kids,” Avery Amador, nursing freshman, said.

The women and men’s tennis players helped clean Maverick’s Corner by washing dishes, sweeping, and picking up plates; both teams also cleaned up the soccer stands after the game.

“24 Strong Week was important for the community and the school, the motivation behind this week was strong,” Yaswanth Mylavarapu, pre-med sophomore, said. “This week wasn’t about us, but about Robert. I would like the event to be held yearly to help us remember the way Robert impacted the community.”

The women’s basketball players rolled their sleeves up to help paint walls with the Habitat for Humanity. The ladies also volunteered at the Wichita Falls Area Food Bank.

“There’s a lot of emotions and personal reflection tied to 24 acts of kindness. Our lives are so fragile, and our time on this earth is a blink. So when I get out and volunteer in the community with my teammates and other organizations, I’m reminded of everything I previously said as well as how my purpose on this earth goes beyond sports.”

The 24 acts of kindness has impacted the players in a positive manner and they hope the tradition continues for years to come.

“I could see it being an every year event as long as people remember the true meaning behind it and what volunteering really means. Sacrifice is the key. Volunteering is supposed to be inconvenient and putting others before yourself. People in the community will always need a hand, and since they do so much for us, why not give back and express our gratitude?” Elizabeth Cathcart, marketing senior, said.

The softball team donated food to the new food pantry on campus and also, the ladies collected bottle caps to help children who are fighting cancer.

“It brought our community and campus together,” Ashley Turner, undecided freshman, said. “We were able to support each other and hopefully make a difference for someone with every act of kindness. [To me, 24 acts of kindness means] remembering the loss of Robert Grays by doing something positive for the community.”

The men’s basketball team took to the courts with the kids at Fain elementary and also sent thank you letters to the people that have inspired and helped them.

“It was a great week for us to remember Robert and the impact he caused in others lives. His passing has caused a great impact on the athletic programs and this school,” Nelson Haggerty, men’s basketball head coach, said. “It gave us an opportunity to celebrate his life and share his impact on us.”