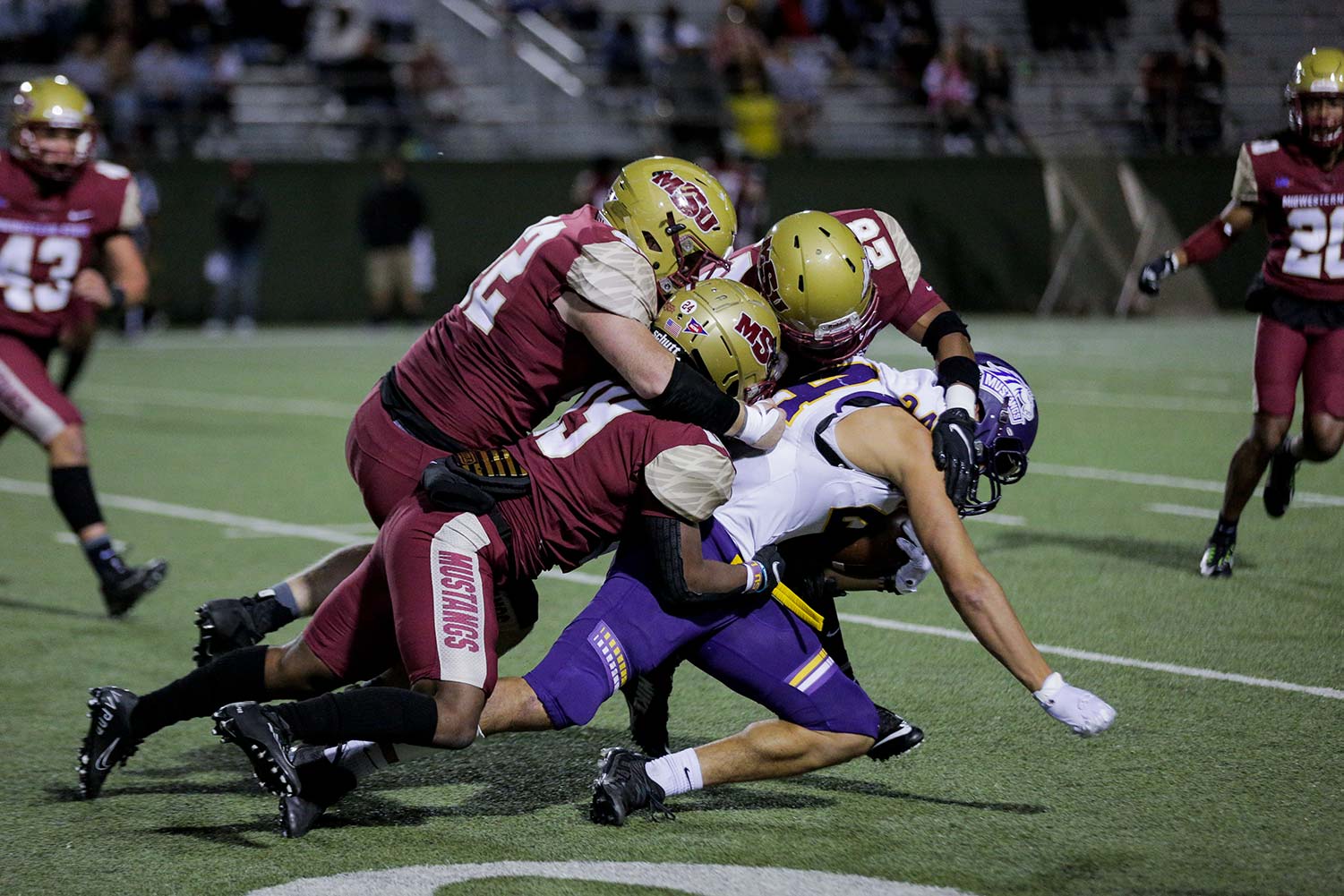 Homecoming week ended with Midwestern State defeating Western New Mexico 52-10 and the crowning of Homecoming King and Queen at Memorial Stadium on Saturday, Oct. 30. The evening started with tailgating celebrations that included fraternities and sororities, other student organizations and alumni.

“Homecoming is the big event on campus. The week of Homecoming is [as] exciting [as] the football game and wondering who is going to be crowned king and queen. The hype of Homecoming makes you want to come out and tailgate on the last day. You gotta come out,” Rey Nuñez, president of Tau Kappa Epsilon and psychology and art senior, said.

Different organizations had food, games and fun for the tailgate celebrations before the football game. Students and alumni were in the sectioned off area in the parking lot of Memorial Stadium cheering on the Mustangs. Omega Delta Phi showed off a visual representation of the bond that ties members together with the “stroll.”

“Tailgating is so much fun because you get a chance to interact with friends and see new people, but the stroll is what we do best. We had different sororities strolling with us too. We had Deltas come out and stroll with us; so, it was good to see everybody out here dancing and enjoying themselves,” Jayden Johnson, Omega Delta Phi fraternity member and art senior, said.

The cheers and music continued while different organizations interacted and played games. Cornhole tournaments and music filled the atmosphere, while others socialized and got ready for the football game.

“Seeing everyone out here was the best. I got to socialize and see people playing cornhole and be with my brothers. All of us were ready for the game, but the most fun is definitely being back out and being around other students,” Nick Cerniauskas, Kappa Sigma member and criminal justice senior, said.

As the tailgating came to an end, the announcements for the football game could be heard from inside the stadium all the way to the parking lot. Everyone packed up and headed inside to watch the game.

“The touchdown was good. I don’t get them too often. I loved it,” Mason said. “It was an amazing feeling to see everybody there cheering. I felt like I was at home. I’m from Allen, Texas and feel at home here at MSU. Last year homecoming didn’t happen, but homecoming this year, I loved it. The whole week was what college is supposed to be. It was great,” Mason said.

The Mustangs extended its lead to 21-0 before the end of the first quarter when Sterling-Cole passed to Ja’Marzeyea Arvie (No. 3), wide receiver and criminal justice sophomore, for a 4-yard touchdown. Then, an 18-play drive that lasted 8:04 for 78 yards, ended when Jalen March (No. 21), running back and education freshman, ran the ball in for 2 yards making it 28-0.

Harrison opened the second half with a 95-yard kickoff return for a touchdown, then the Mustangs continued putting up points to build on the lead. K’Vonte Jackson (No. 1), running back and kinesiology senior, had a 72-yard touchdown run and quarterback Neiko Hollins (No. 14), quarterback and kinesiology sophomore, found Moore for an 85-yard pass to make it 52-0 going into the fourth quarter. MSU defense made six turnovers including four fumble recoveries and interceptions by Dylon Davis (No. 16), defensive back and criminal justice sophomore, and Khalil Finley (No. 7), cornerback and mass communication senior. 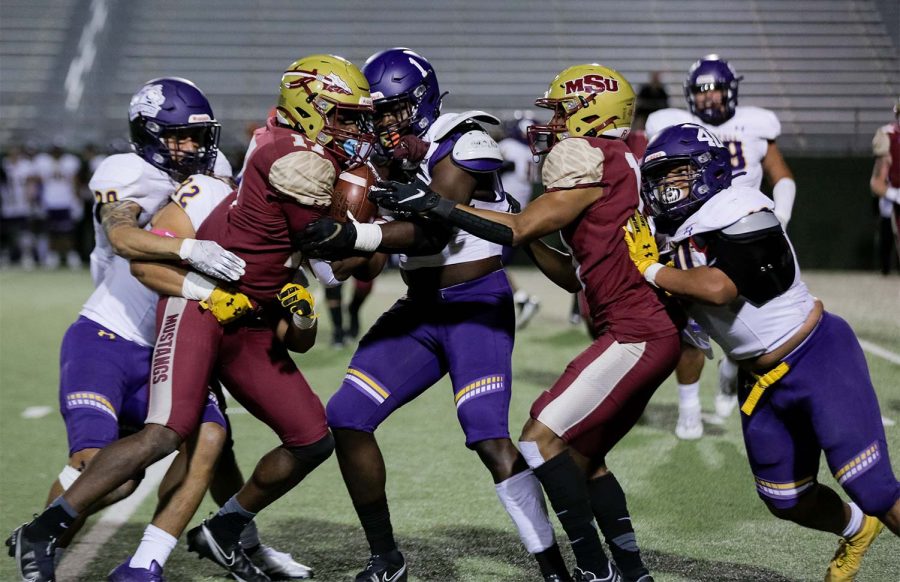 “The interception felt great because it’s good to be able to have fun and contribute to my team,” Finley said. “The atmosphere of Homecoming is the best. The energy in the stands was outstanding.”

Linebacker Justin Guillory (No. 22), nursing junior, led the Mustangs with seven tackles. Other defensive players Melik Owens (No. 4), defensive end and business management senior, and Zed Asowata (No. 90), defensive lineman and sports and leisure junior, made stops on the defensive front.

“Overall, it was a fun win for everybody: the fans and players. We wanted to be able to do what we did tonight. We said this is what we’re going to do and did it,” Maskill said. 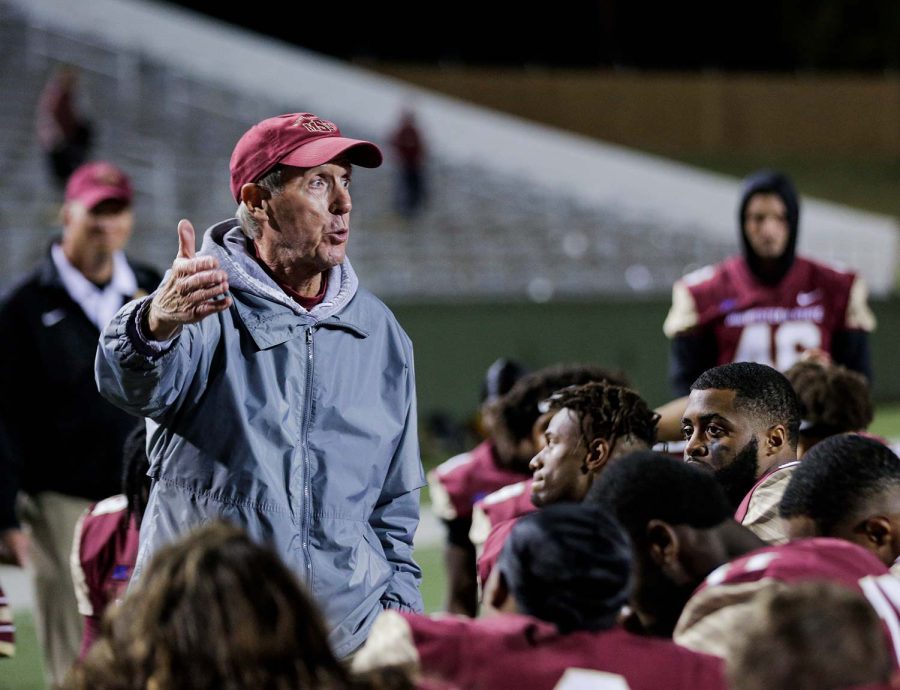