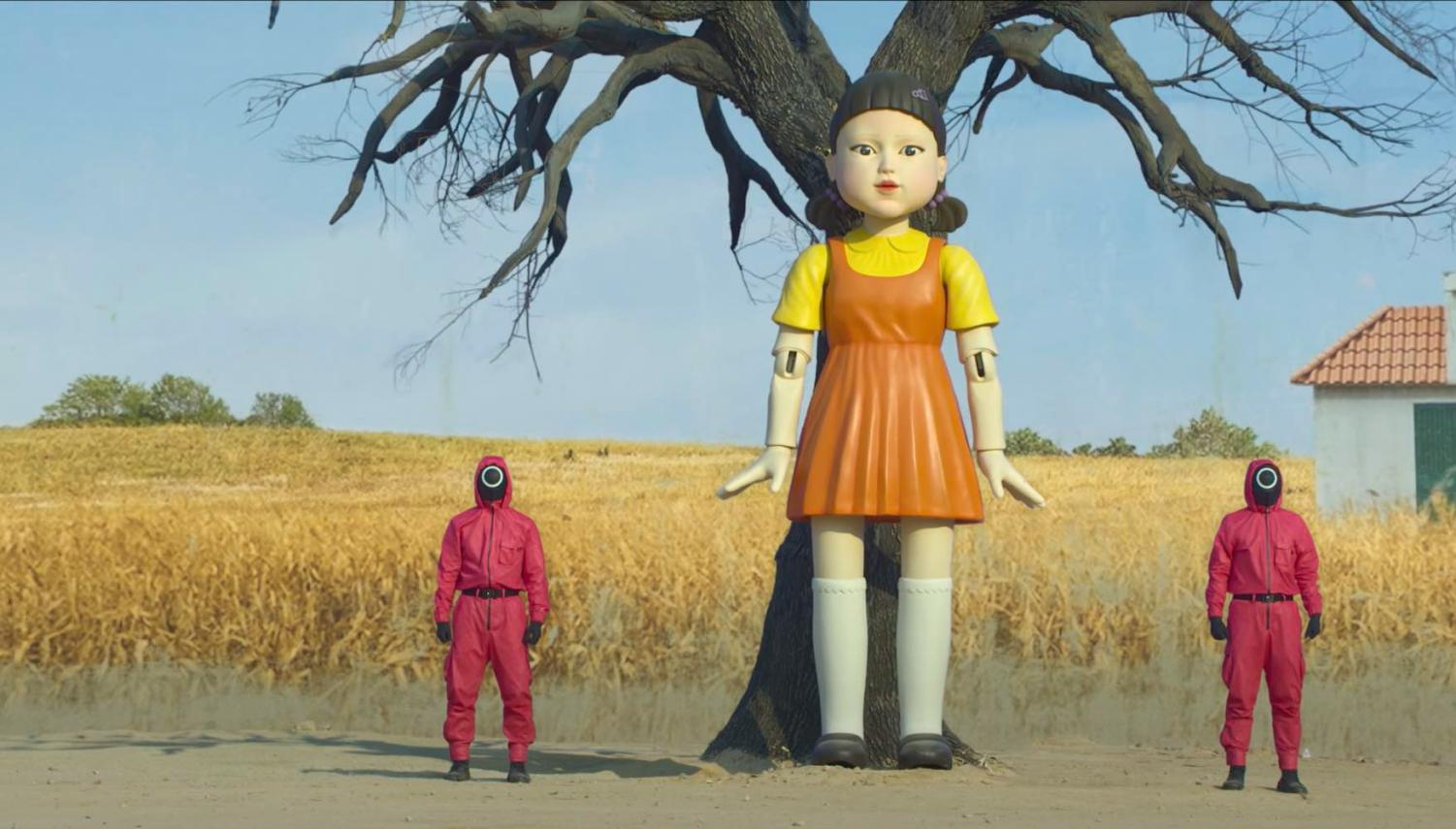 By now you might’ve heard the name “Squid Game,” an original Netflix series created by Hwang Dong-hyuk. The dark, intense and at many times, disturbing Korean thriller became a sensation overnight. With just nine episodes at about an hour each, “Squid Game” reached first place in view count, just four days after its initial release.

The series takes place in Seoul, the capital of South Korea, and the story begins with a flashback of kids playing what’s called ‘Squid Game’ a game that was popular in Korea in the ’70s and ’80s. Kids were divided into defense and offense and played inside a Squid-shaped board drawn on the ground without any rules as to how physical it could get.

We rapidly transition to the present day, where we’re introduced to the not-so-lavish living conditions of Seong Gi-hun, the protagonists.  Gi-hun lives in a one-bedroom apartment along with his mother that he still financially depends on, is three years post-divorce and faces a great possibility that he’ll never see his daughter again. Furthermore, Gi-hun is an unsuccessful gambler despite drowning in debt. His story, similar to 500 other participants, is why each contestant featured in Squid Game exchanges their life to play children’s games (like Red Light, Green Light), at a deadly cost for a chance at winning a life worth of money. Although it may be easy to say no money is worth your life, the winner of the game would receive 45 billion won (the South Korean currency). The contestants in the game decided to walk away after seeing 225 eliminated only in the first round, but end up coming back because again, the winner of the game would receive ₩45 billion. And if I ever had the chance – I’d probably take it too.

While Gi-hun is our main focus, the other side characters start to unveil throughout the series.  The contestants’ names are not used, instead, they are referred to as their number. Better yet, the game makers are masked and never allowed to speak, causing a strange and inhumane barrier between the contestants and the antagonists. Sae-Byeok, a teenage North Korean immigrant girl, is trying to get her little brother out of a shelter and rescue her mom who was deported back to North Korea, after hiding in China. It’s nearly impossible to not feel for her, though by other contestants she was labeled ‘pit pocket’ and a thief…even I caught myself rooting for her. Byeok puts up a cold front, but on the inside, she is really just another regular girl that is trying to save her family – and that’s respectable.

Next, we have Cho Sang-Woo, who compliments our main character because the two grew up together. Although he is, at first, portrayed as a hero of his town, who was able to make it out of South Korea and become successful in the U.S., Cho Sang-Woo is facing lawsuits after lawsuits for financial crimes… yet nobody knows. This character by far was the most selfish. The statement ‘I’ll do anything to win’ was not taken as seriously by anybody else but him, even when it came to him and our main character, Gi-hun. He did not feel bad about stepping over anybody if it meant his likelihood of moving on to the next round.

Full circle to the end, our main character Gi-hun is brave but very naive. His strength is what carries him to the end and wanting the best for humanity…but to an overextension, which is why I did not like the ending. You’d think after going through ‘hell’ the logical option is to take the money and go, but Gi-hun makes a decision that I didn’t think to make sense.

Though the show, in my opinion, exploded mostly because of the explicit violent, bloody and unsympathetic grace toward the contestants, multiple messages can be pulled from this series. For instance, the harsh reality of the economic inequality and those of the lower class (like the contestants) are in a desperate conflict to survive.  They are unfairly exploited at the price of their lives but used as entertainment for the ones that bet on the results.

That’s right – there is an intersection where our world meets theirs. While the contestants are between life and death, Squid Game is viewed as entertainment and a gambling game for the mostly white westerner foreign elites. As a fan of shows such as “Dexter” a serial killer who kills serial killers or the twisted and dark “Vis a Vis”, “Squid Game” really didn’t bother me that much. I would recommend watching it slowly if you’re the type to cover your eyes over anything too gory, but if you have nine hours available and can take it, go ahead and watch in one sitting as I did. Overall, I’d give the series 3 1/2 stars.