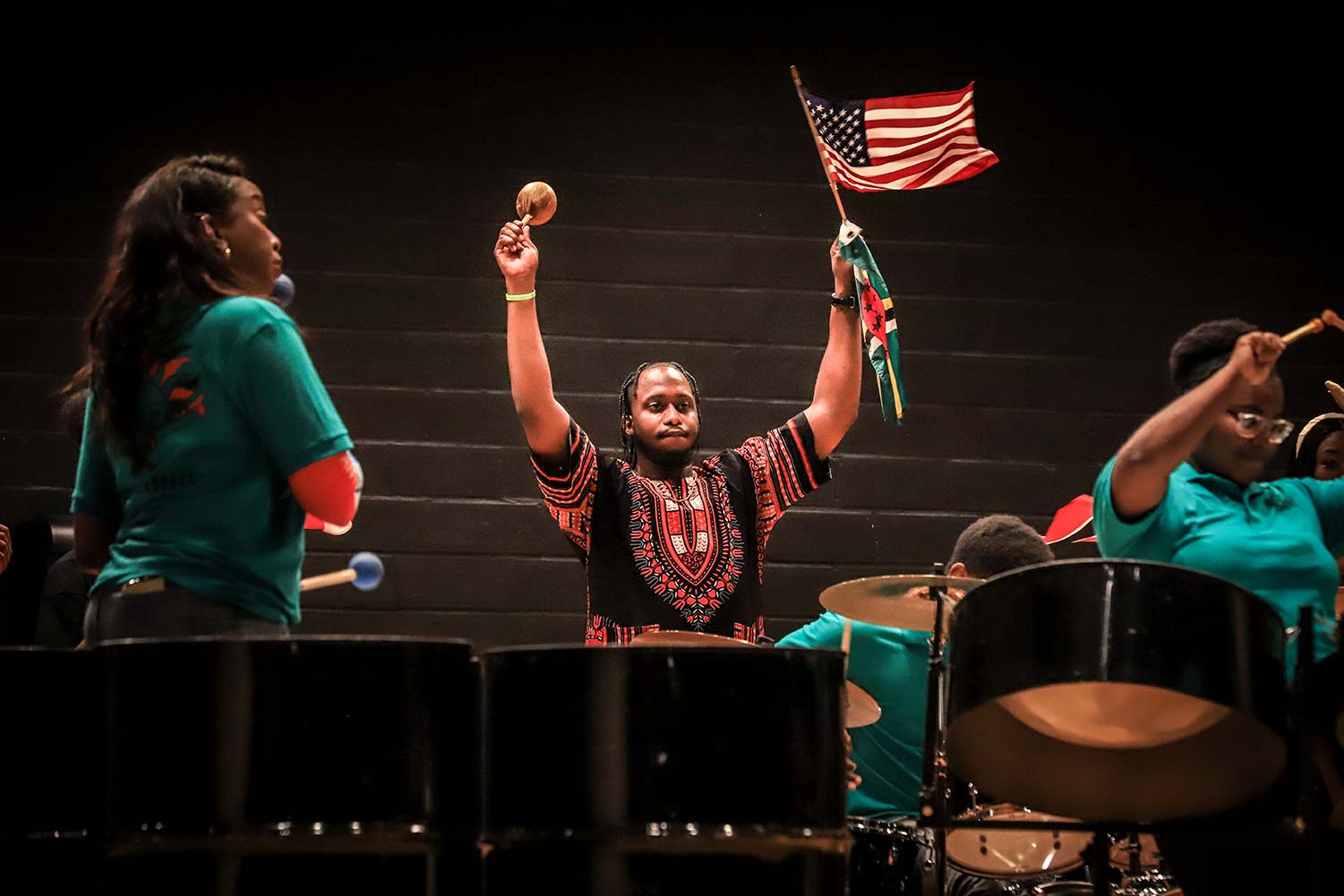 The Caribbean Students’ Organization began Caribfest with the Culture Show at Akin Auditorium on Thursday evening, Sept. 23. The show consisted of music, dance and costumes from across the Caribbean islands. Over 100 people attended from all different walks of life to get a taste of the vibrant Caribbean culture.

“I really like the diversity of it. There was a band playing and also dancing and modeling, and I didn’t know it was going to be like that. Just seeing all the different flags of the Caribbean made me realize how many different cultures are really on the islands.” Kendall Jones, music and pre-med senior, said.

In addition to music and dance, there was a masquerade, a swimsuit modeling segment and live music from a small band and percussion performances on drums called djembe. One traditional wear display used designs of the Yoruba and Igbo tribes from Nigeria, where many in the Caribbean can trace their roots. Another performance was a traditional Dominican creole, which is a costumed dance that depicts the island’s culture and history from the past 300 years. Creole featured tall, feathered headdresses and colorful clowns with ruffled costumes. Another popular event was the Grenadian Jab Jab, which consisted of a performer in chains who wore a horned helmet and was covered in oil. The Jab Jab celebrates emancipation and equality.

“It was a great experience. I enjoyed the crowd interaction and I feel proud that I was able to share something that was a part of my island with the people here, to the other Caribbean students as well as Americans who are just getting introduced to our culture,” Djembe performer Garvin Joseph, mechanical engineer junior, said.

Joseph hyped the crowd up by encouraging them to clap, sing along and dance. Fellow performer Tishauna Perkins said they want Joseph back for the next Caribfest. When Joseph interacted with the crowd and played the djembe, the audience went wild.

“I think it’s necessary that we share our cultures and our experiences with others because that’s how we diversify and make everything better,” Joseph said.

“I like exchanging cultures with others and learning from others as well. Based on the response that the crowd had, they really encouraged me and made me feel comfortable sharing my culture because it was well-received,” Xavier said.

As a singer, dancer and swimsuit model for the Culture Show, Tishauna Perkins, biology senior, returned as a triple threat for her third Caribfest. She said coming to a different culture and sharing her own broadened her perspective.

“When you’re at home on your little island, it’s just like you are completely oblivious to the fact that people don’t know much about your culture. It was a huge culture shock coming here because you always feel like your culture is the only way you do things, and then you’re exposed to different cultures. Even in the Caribbean, a lot of people feel like it’s one set way. But the different islands have different ways of doing things. The way they speak, their food, and the music they like to listen to,” Perkins said.