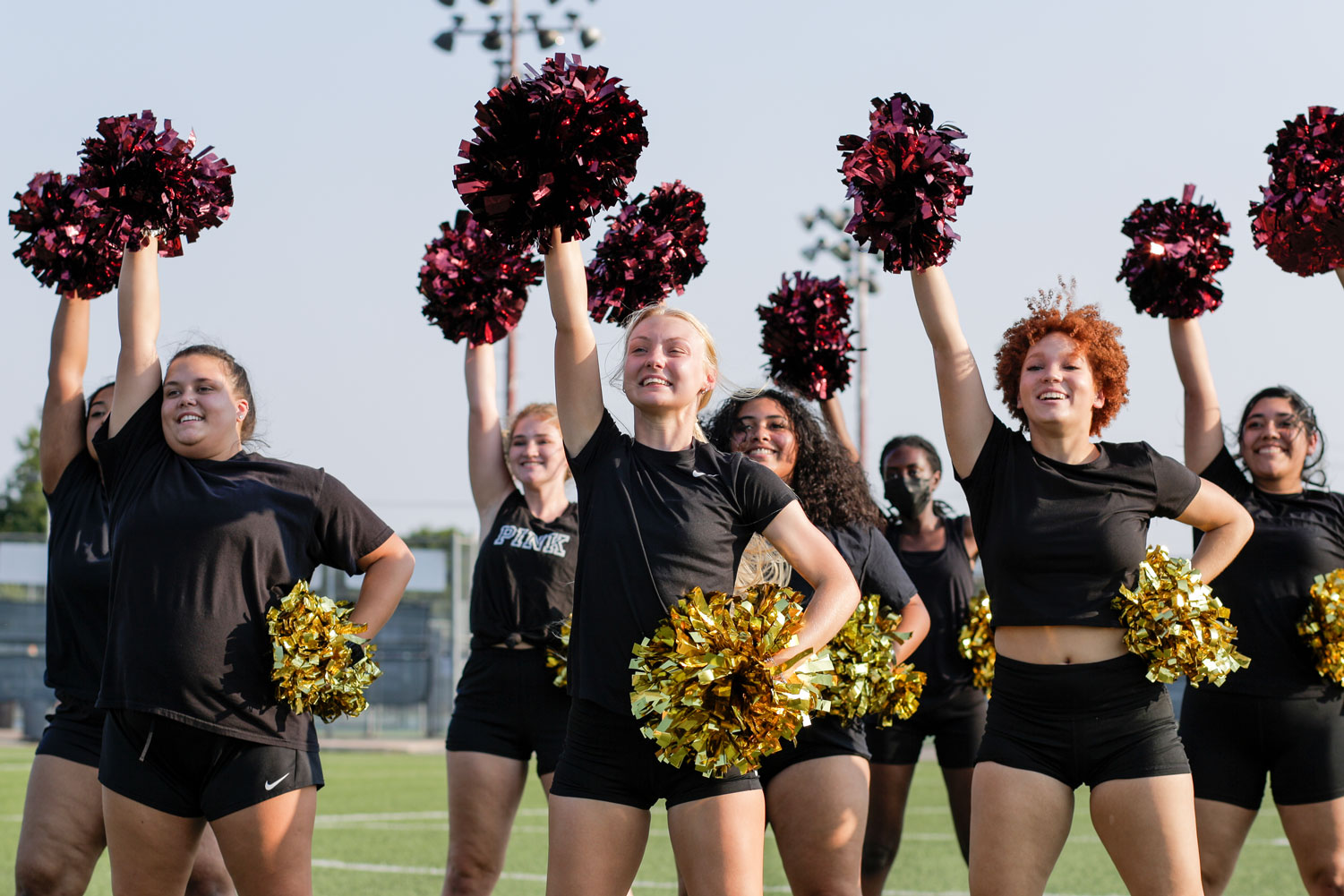 For a team to be successful, the captain leading needs to be just as successful in their own life. This is the story of how despite challenges or unexpected transitions in life; every circumstance can be overcome and lead you to find your true destiny.

Born and raised in Mesquite, Texas, Alicia Phinney, social work senior, is the captain of MSU’s dance team, the Prancettes.

“My first year at MSU in fall of 2018, I actually came in as a cheerleader. Being a cheerleader was actually the main reason why I decided to come to MSU – Midwestern wasn’t a choice for me unless I made the team, which I did. But after shortly being on the team, I just felt like it wasn’t for me,” Phinney said.

Phinney was a cheerleader since the age of seven; despite loving cheer, Phinney says the environment was becoming toxic for her and realized she wasn’t enjoying what she was doing.

“I had kind of lost my love for cheer, and at the time one of my friends was a part of the dance team and had told me to just give it a try – which is what ultimately led me to becoming a part of the dance team,” Phinney said. “Even though I liked it, my sophomore year was a little rough for me, just because I was making that transition from cheer and missing cheer a lot and then learning the differences between cheer and dance.”

After her initial challenges with missing cheer, Phinney began loving dance. After being on the dance team for just one year, Phinney became captain her junior year and has helped mold the team to what it is today.

“Fast forward to today, I’m a senior, it’s my last year and from being captain, for now, two years, I’ve made a lot of changes in the program and have made good progress on the team.  I’ve built the team up a lot and just overall, made healthy and positive changes that were necessary for the team. Looking back, the transition from cheer to dance was a good decision I made and was for the better,” Phinney said.

Phinney had found a love for dance, a love that she believed would only be for cheer. This new passion was not the only transition in her life as Phinney also did a complete 360 academically.

“Because of the environment I was in during cheer and feeling discouraged, I fell into a depression and completely disregarded my grades. I ended up being put on academic probation after my first semester of college. It’s not the cheer team’s fault, I was just very unmotivated during that time of my life and didn’t feel like I fit in,” Phinney said. “The following year I made above a 3.0 and the semester after that I made the dean’s list. Since that first semester of college being put on academic probation, I haven’t made less than a 3.0 every semester.”

Phinney has gone through many changes throughout her college years, from a change in passion to a change in academics. Through this search of passion and focus on academics, Phinney found a new interest in study.

“When I came in at MSU I was originally a nursing major. Initially, I wanted to be a forensic nurse to work and help with rape victims, domestic violence victims [and] child abuse victims. However, I quickly realized that nursing wasn’t for me. I noticed how I wanted to get more into the criminal aspects of things and work specifically with children, so I decided to switch my major to social work and minor in criminal justice,” Phinney said.

Growing up, Phinney herself had an encounter with Child Protective Services and ended up being raised by her grandparents. Phinney says that experience shaped her, and ultimately her goal is to work for the CPS investigations unit. She plans to begin as a caseworker and slowly make her way to investigations where she can help and provide for the needs of the children in the system.

“CPS played a big role in my life. I know the system is broken; I’ve seen it firsthand. I want to be able to go in and be a change for those children and be a voice for them and do the best that I can for them because I know they need someone to fight for them,” Phinney said.

Phinney said she began working as soon as she could legally to keep her mind off what she’s been through. Since freshman year of college, Phinney has worked part-time as a waitress, a member and now captain of the dance team, while still balancing school. She cited her family and friends, in particular her grandparents and siblings, as her support system, but she says she finds most of her strength spiritually.

“What has even more gotten me through anything is God. My favorite verse that I always go back to is Isaiah 43:2, which is ‘When you go through deep waters, I will be with you.’ These last four years I think I’ve grown so much in loving myself, and finding my true purpose in life and what I’m meant to do…my advice to anyone who has a similar background to me will always be to not give up,” Phinney said.

Phinney is expected to graduate from MSU in the spring of 2022, her success in her own life while at Midwestern has also gotten her to successfully lead MSU’s dance team that will continue to flourish on her legacy once she moves to the next chapter of her life.