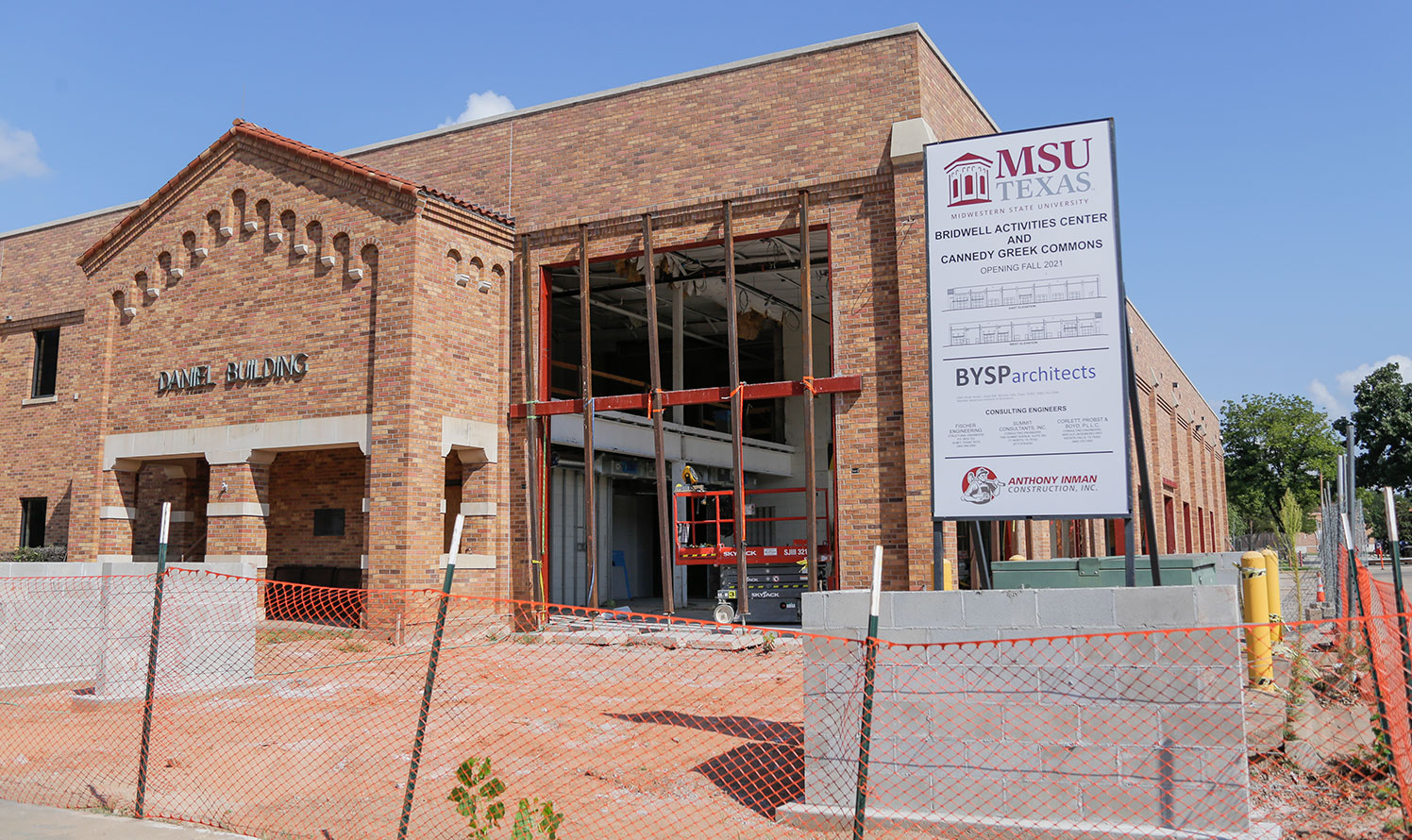 The Daniel building is receiving renovations to become the Bridwell Activities Center, Aug 30.

Catching up on campus renovations

MSU Texas underwent renovation around campus to bring a modern and updated look. Renovations have been going on since last fall when the initial stages for the Bridwell Activities Center began.

“[The Bridwell Activities Center is] still in process, it’s the old Daniel building,” Kyle Owen, associate vice president of facilities services, said. “I’m sure the building is completed and ready for occupancy in January, but I can’t tell you that we are there yet.”

The BAC will create space for meetings, chapter rooms and collaborations, but students must wait till the spring semester for the BAC. In the meantime, they can look forward to other renovations on campus, such as in the Mesquite dining hall.

“Just finished up some work in the Mesquite dining hall… we replaced the ceiling above the server area,” Owen said.

The renovations in Mesquite dining hall were not constructed in a place students necessarily frequent, according to Owen.  However, if students look above the hall’s servers, they’ll notice a new ceiling. Staff at Mesquite dining hall such as Lori Dodge, who works as a cashier have noticed the change.

“I like [the new ceiling], it’s about time that they started doing renovations in much-needed areas,” Dodge said.

Dodge said that other staff members have noticed the new ceiling as well and think it looks good. Over the summer there were more renovations made such as in a Prothro-Yeager lounge.

“On the second floor of Prothro-Yeager, the south end, there’s a lounge area… We replaced the carpet, painted the walls, put in new LED lights and have ordered more furniture but like everything else, it has been delayed… it’s going to be early October before [the furniture is] here,” Owen said.

The change in the lounge has been noticed by students frequenting the space in between classes, such as Isaac Nyberg, history freshman, who wouldn’t go to the lounge very often before it was renovated.

“I like the way [the lounge] is now. [It’s] better, mostly because the colors are bright and it makes me feel happier,” Nyberg said.

Prothro-Yeager is not the only building with updates.  D.L Ligon Coliseum had renovations done as well. Rooms 131, 111 and 223 were given a touch-up similar to the lounge in Prothro-Yeager. Furniture ordered for projects in both buildings and BAC has been delayed, but their arrival is expected soon.

“[In room 131] we did some touch-up paint and put in new LED lights. [In room]111… we pulled [the chalk and marker boards] down, patched the wall, put in a real markerboard and then replaced the lights in there. Then [in room] 223… we put in new LED lights there, carpet… We also bought a new markerboard… [it will arrive] in two weeks, it will be replaced,” Owen said.

Ceiling tiles for room 223 in Ligon were also bought but have not arrived. Owen says once the ceiling tiles arrive the facilities staff will work around schedules and install them in sections. At the latest, the ceiling tiles will be fully installed in December. This delay, along with other delayed orders, has not stopped construction and Owen says there are plans for more renovations.

“We’re buying more furniture for the northside of Bolin, kind of porch area, we’re gonna buy benched to put in there…We’re planning to renovate the two restrooms in South Hardin, ones by the graduate school… no construction will probably go on till maybe November, December time frame,” Owen said.

These plans plus other maintenance, such as tunnel repairs, will be happening on campus in the future. Owen hopes for more funding to take on other projects, the budget for the BAC was $5.67 million while other projects had an estimated budget of $30,000 or less apiece. Another project Owen wants to take on is updating the Bolin building, but in the meantime, they have other renovations to keep them busy.