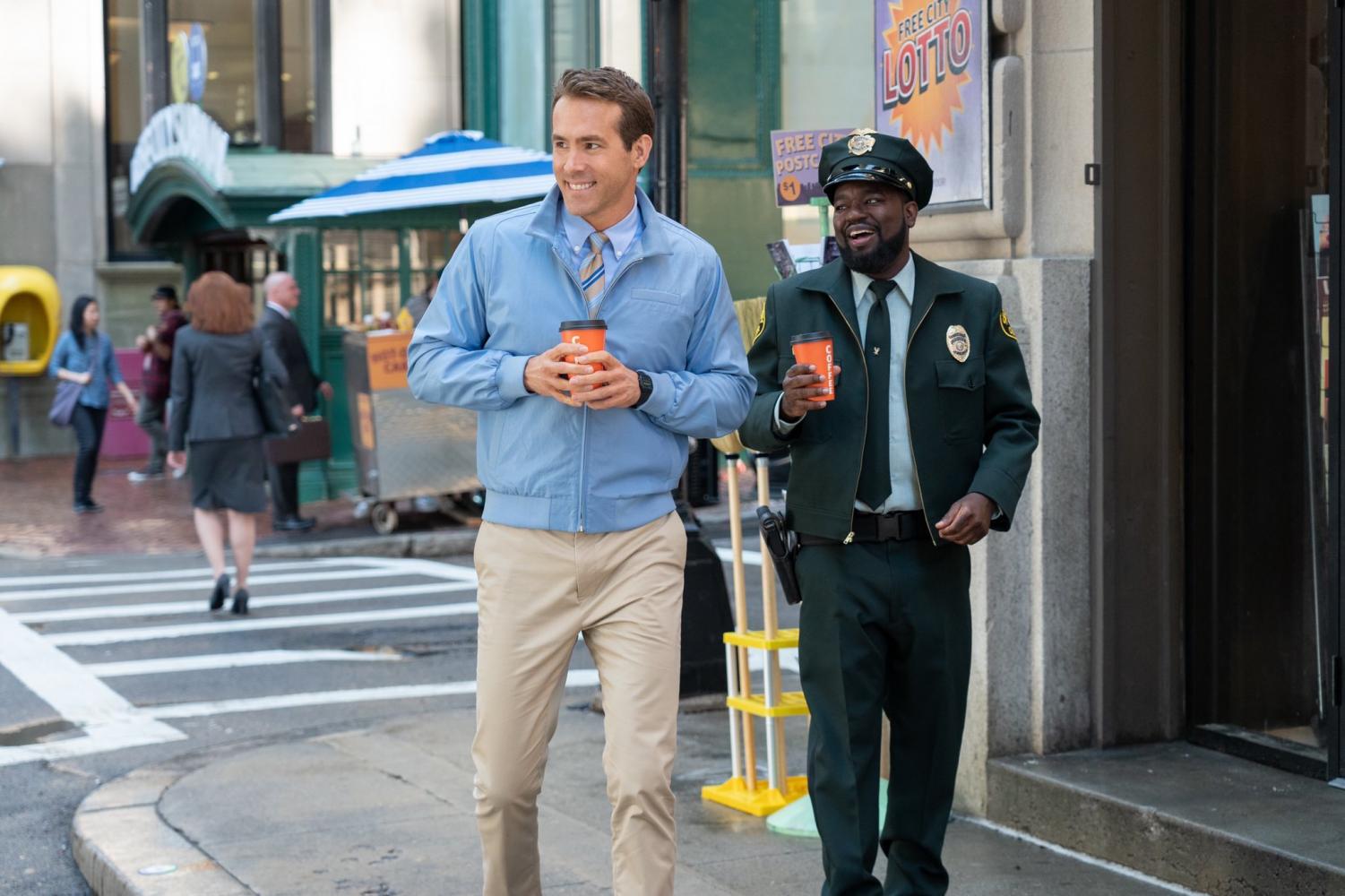 “Free Guy” is fun and heartfelt, but its themes fall flat

“Free Guy” depicts a massively multiplayer online game in which a nonplayable character suddenly develops self-awarenes.  The NPC begins interacting with his virtual domain in ways that reverberate into the real world. Films about artificial intelligence and simulated realities can either become too intellectualized, such as the movie “Transcendence,” or they can become too bogged down with pop culture references and shallow action scenes, such as “Ready Player One.” Virtual world movies can still balance between action scene madness and a hint of philosophy, like “The Matrix.” However, the movies I personally prefer revolve around a fun, unique take on the concept with a strong emotional punch to boot.  Providing a cocktail of “Groundhog Day,” “The Matrix” and “Wreck-It-Ralph,” “Free Guy” accentuates its intriguing concept with a strong emotional core. Despite having heart, though, the film’s message of originality and independence feels at odds with the movie’s overall style.

Ryan Reynolds plays the film’s Awol NPC named Guy, and he brings comedic flair, chemistry and the right amount of cheese to the lead role.  Taika Waititi plays the film’s over-the-top, corporate antagonist, wielding ostensibly deistic power against the artificially intelligent NPC: spawning gunmen, explosions and transposing skyscrapers in his pursuit to terminate Guy.  At the movie’s heart is a “will they, won’t they” dynamic between two former indie game developers, named Millie (Jodie Comer) and Keys (Joe Keery).  One sells out and works for the corporatist video game company while the other scours the virtual world in search of plagiarized code from their unpublished indie game.  This dynamic adds another dimension to Millie and Keys’ relationship, which pays off in engaging and clever ways throughout the movie’s runtime and is the most worthwhile component of “Free Guy.” While Millie and Keys represent the best of “Free Guy,” their status as indie developers leads to some conflict between the film’s style and message.

For all the film’s talk about the importance of independent art, the inclusion of overused pop culture references casts some doubt on how self-aware “Free Guy” actually is.  Tense or climactic scenes were distracted with cliché add-ons like a lightsaber, a Hulk punch or even a soundbite of “Wrecking Ball.”  With such a dramatic juxtaposition between the film’s themes and these overused elements, the film’s central conflict between two indie developers and a plagiarizing corporation feels inauthentic. While watching characters openly saying the MMO is stupid and oversaturated, I started to wonder whether the movie about a self-aware NPC really is as self-aware as it’s letting on. Could the initial idea have been a personal story about an indie developer communicating his feelings to his co-worker, and that script was eventually turned into the large-scale action movie, filled with cliché, that we eventually got? I don’t have anything against explosions, action scenes or lightsabers, but special effects without an emotional core are elements that belong in video games instead of movies. As said before, “Free Guy” has an emotional core, but that heart feels undermined by its overall style and willingness to embrace cliché. I enjoyed the experience as a whole, but I was left wondering how great this movie could have been if they cut out the cheap pop culture references and directed even more focus towards Millie and Keys’ relationship.

For all its talk about the importance of indie creators, “Free Guy” lacks any unique style on its own.  At the film’s outset, I thought the sterile environments were meant to capture the virtual world’s cookie-cutter nature, but the film’s real-world also looked like overused movie versions of what an apartment or company headquarters would look like.  Cinematography and lighting were also very bland, never aiming to set any sort of mood or tone for the movie.  The style of “Free Guy” is like aluminum, practical and useful but lacking any flare or significant value.  As with the clichés, this lack of technical talent wouldn’t be so noticeable if the movie didn’t base its whole conflict on taking down a sequel-bating, unoriginal corporatist through the power of indie creation.

In short, “Free Guy” is a good movie, but not a great movie.  I can’t help but wonder how good it could have been if it was directed by someone with a voice, someone who could take the message of originality’s value and bring it to life.  Stories include many moving parts, but a flimsy message can make even the best of films feel fake. “Free Guy” still is entertaining and defined by its emotional core, but its self-contradictory themes are hard to overlook.  I’m giving this one a 3.5 out of 5.

One Response to ““Free Guy” is fun and heartfelt, but its themes fall flat”