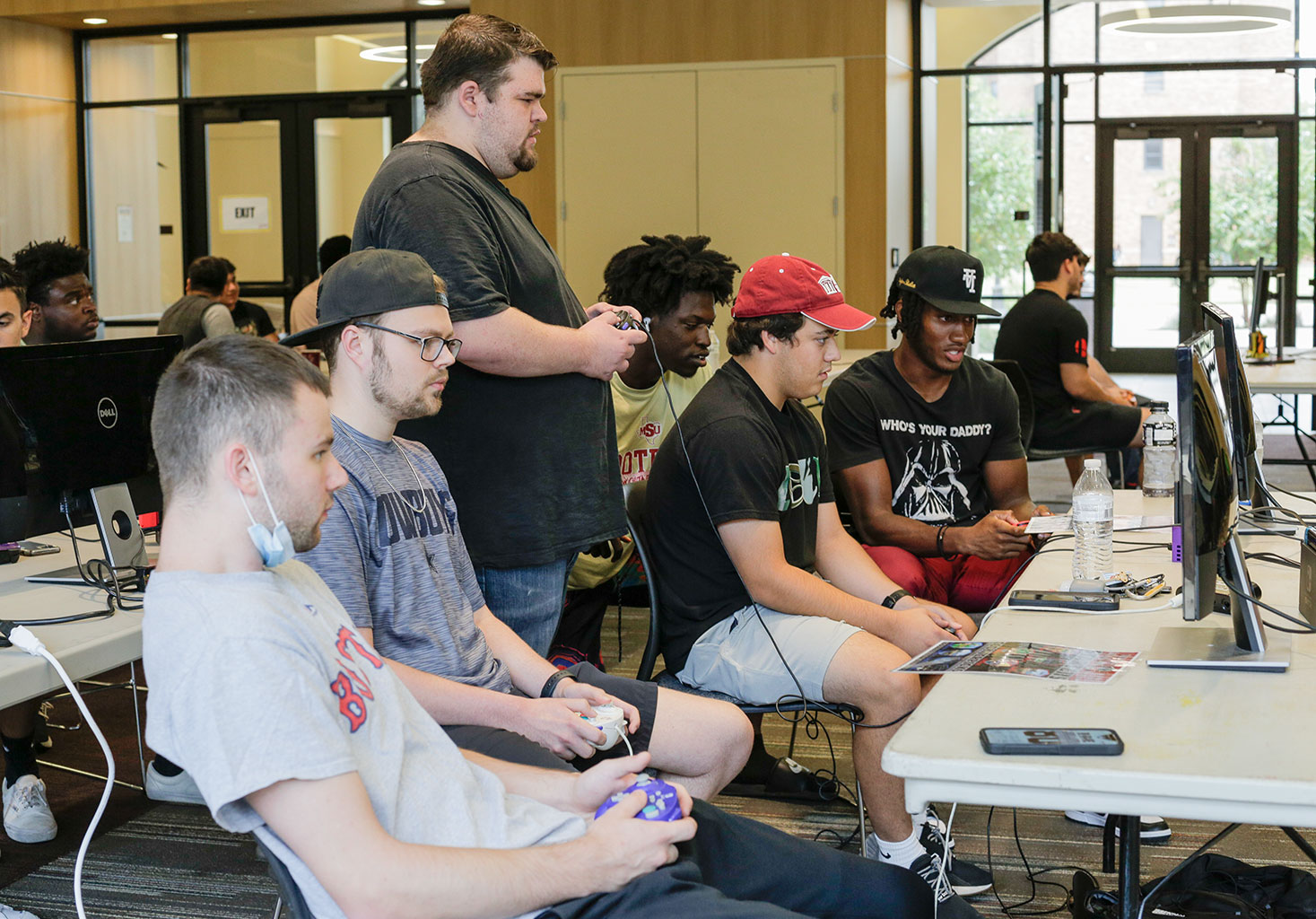 Game on Mustangs: Esports and Gaming Club arrive on campus

With their official launch on Aug. 23, MSU Texas Esports and Stangs Gaming Club are looking to provide for students in a new way on career and social levels. While they have heavy overlap, these two organizations ultimately have different goals.

MSU Texas Esports will consist of varsity-level competitive teams. These players will be eligible for scholarships which will be funded through the Student Affairs division. However, supporting players are not the only goal of the esports group. Funds from Student Affairs have also been set aside for potential “student workers” that will help the teams, and there will be opportunities to gain experience in fields beyond play, such as announcing, team management and shout casting.

“[The esports group] wants to work with those who might not want to just compete,” Zachary Zoet, manager of the organizations, said. “[The teams would] provide tools to make them competitive in a hyper-competitive space.”

Tryouts for the first varsity-level competitive team happened on Aug. 24. The team’s focus was for the game Rocket League, which was chosen due to surveys showing a strong player base inside MSU. The esports organization currently has a Living-Learning Program on the fourth floor in Legacy Hall with students living in it this year.

“It’s great to [live with] people with similar interests,” Payton Cox, computer science sophomore, said. “If any of us wanted to play games competitively, we just knock on another person’s door and ask ‘Hey, you play this game?’ And you might get something.”

Stangs Gaming Club is a social recreational group more focused on casual gaming, including tabletop and card games. It is unlikely to provide scholarships and will act as a new way for students to connect without any competitive pressure. Zoet talked about how this organization could help students reach out in new ways.

“People are making connections across the internet, and I feel like people could make those connections here at MSU with a group like [Stangs Gaming Club],” Zoet said. “I want to better carve out spaces for everyone to be able to find a place.”

While the club is not focused on varsity-level competitive play, it will still be accommodating those who enjoy recreational competition. Announced on Aug. 25, a team will be made for the game Apex Legends and will compete in an open division team league.

“We’ll be having tryouts [for the team] soon, so look forward to that,” Zoet said.

Gallery|4 Photos
A mock-up view of the planned gaming and esports lounge, courtesy of Zachary Zoet and Esport Supply, Aug 20.

The esports LLP will be receiving a renovation to its lounge to better accommodate esports players and members of Stangs Gaming, as well. It will have 13 Alienware PCs, current video game consoles and dedicated internet access separate from the rest of Legacy to support both. Richard Elliott, network technician, emphasized the importance of the separate, more direct internet connection, talking about how it will be faster and more reliable, as it wouldn’t share the network with the numerous devices students and faculty use through the building wi-fi.

“We would be doing a disservice to these organizations before they even existed if we didn’t [obtain a separate internet connection],” Elliott said.

The lounge will be funded through a portion of the Higher Education Assistance Fund, which is from the state of Texas and is meant for public universities. Elliott said that a small portion of the fund is being used for the lounge.

“Now I’ve been focusing the past two weeks on how to make the room cold enough to handle 13 very large ‘space heaters’ [or PCs],” Elliott said

MSU Texas Esports and Stangs Gaming club share a Discord server, where those involved and those who wish to join can introduce themselves, keep up with events or announcements and find other gamers with whom to play or even just chat. Without a dedicated meeting space for the organizations, the Discord server is one of the best ways to join the organizations.

“People on [the Discord server] are putting out LFGs (looking for group),” Kolten Pulliam, computer science sophomore, said. “Now there’s people all over campus playing tons of games with each other.”

To further both of their goals, the organizations will be hosting events throughout the year. The first event took place Sunday, Aug. 29, in the form of a tournament for the game Super Smash Bros. Ultimate. “Smashpede,” as it was called, had a $300 prize pot for the winner and was open to MSU students for free and outside players for a $10 fee. Local organization Texoma Esports helped host and live-streamed the event.

Zoet talked about expanding options for future events. Beyond working with Texoma Esports again, he has considered collaboration with Wichita Falls ISD’s esports group. He plans to partner with Maniac’s Mansion for a downtown event sometime this year. He also mentioned wanting to do a “charity game-a-thon” where a multitude of games would be played and likely live-streamed, encouraging donations to support charity.