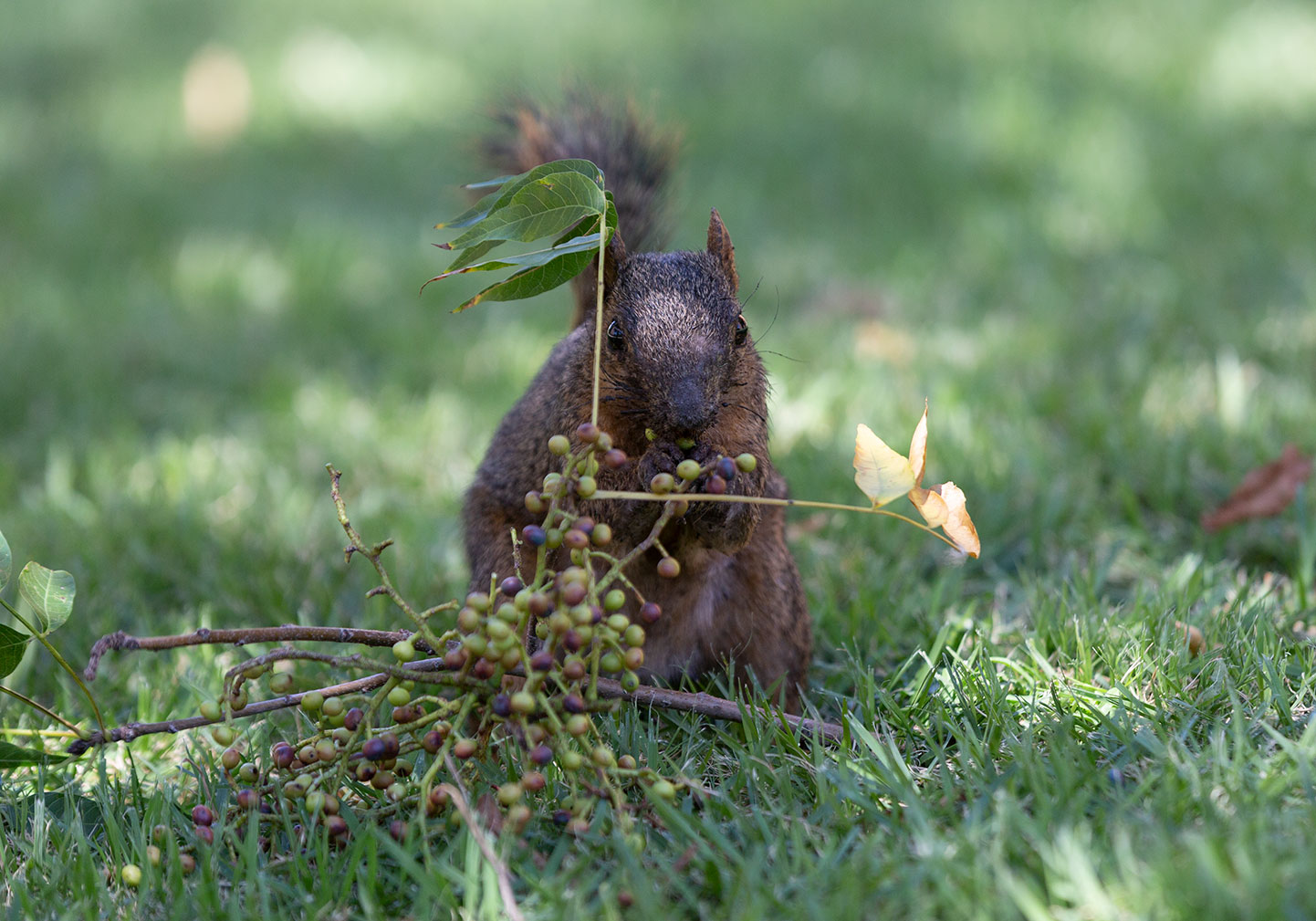 Saul Squirrel eats berries he found so he can conserve what is left of his ambushed acorn stash, Aug 25. (Colin Stevenson)

Saul Squirrel eats berries he found so he can conserve what is left of his ambushed acorn stash, Aug 25.

The first day coming back to school is never easy. Whether you have an 8 a.m. or it is your first day in college, it can be difficult to shake off the summer and get back into the groove of school. However, students aren’t the only ones having to readjust back to school-life this fall. Our fellow campus critters have to as well.

Between MSU being in COVID-mode and having the summer to themselves, the influx of students and faculty returning has shaken up the campus animal population. As somebody who moved to Sikes Lake during the campus shutdown, the full return really shook Ginny Goose.

“Everybody returning all at once is definitely overwhelming. It’s more people than I’ve ever seen before, but it’s also super exciting to see campus so alive!” Ginny said.

However, her actual first day of classes didn’t live up to the expectations she had built. Ginny said her day started out with random people throwing bread at her.

“It’s such a stereotypical cliche at this point. I mean, first of all, I don’t like bread. Secondly, even if I did, I wouldn’t eat some stranger’s loaf thrown at me at eight in the morning. That incident just set my mood for the whole day. It really ruffled my feathers,” Ginny said.

In one of the neighboring housing units, Oak Hall, some animals had similar rough-day tales to share. Saul Squirrel said he felt like he couldn’t catch a break.

“First, I woke up late to my branchmate snacking on my stash of acorns claiming that they were his. I didn’t get to complete my morning routine before I had to leave, plus, I couldn’t find my tail brush, so I went to class with bed-tail. I was a mess. As if it couldn’t get worse, I went to the wrong room and had everybody watch me as I left in the middle of the lecture. You would think some of those people had never seen a squirrel try to find his chem class,” Saul said.

After dumping his problems on us, Saul admitted that he’s known of other people with worse first-day stories than his.

“One of my cousins fell out of the ceiling on her first day and landed on a student in class with her,” Saul said.

Not every animal had a bad story to tell. Sammy, a service dog, thought the first day of classes went perfectly. As a full-time service dog but a napper on the side, Sammy was worried about waking up late or falling asleep in class.

“I got to go on a walk and see some friends, then had a full breakfast and still made it early to my first class! Before I knew it I was eating lunch and chasing some of the freshman squirrels by the fountain,” Sammy said.

Sammy wanted to make it known that the university has publicly commented that chasing underclassmen squirrels is not considered hazing. This has not yet been confirmed with the university.

“I’m excited for the rest of the year! My owner and I have the same schedule again! I’m not exactly sure what we’re studying, but I’m just happy to be here!” Sammy said.

Sammy’s owner commented that she was a very good girl and is definitely the professor’s favorite student.