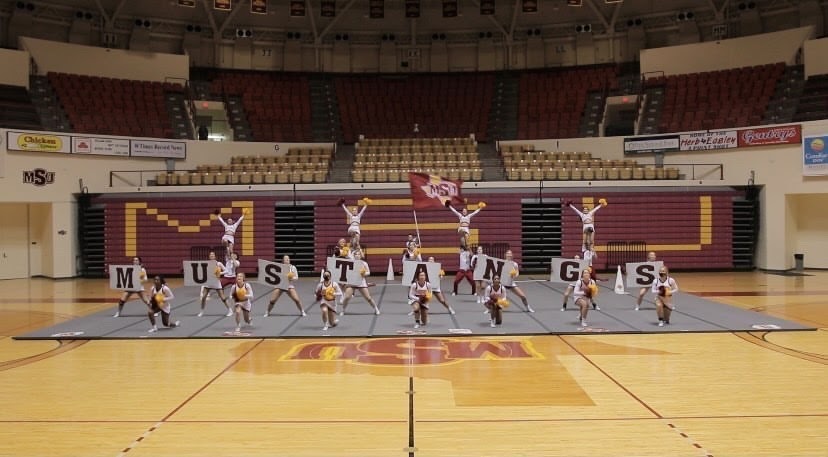 “This was MSU Cheer’s first time ever to compete in the Open Coed Game Day Division. Not only that, but this is the first time we have ever competed against D1 schools. Our goal for this year was to compete with a clean routine. Our team not only started the season late due to COVID-19, but they also had many camps and practices canceled due to the pandemic. Competing this year was a luxury a lot of schools did not have. This year’s placement far exceeded our expectations,” Collin Stokes, cheer coach, said.

COVID-19, unexpected changes and higher competition were just a few of the obstacles the cheer team overcame this season. DanLee Duncan, cheer co-captain and kinesiology junior, said these factors made the Nationals placement even more special.

“This year’s Nationals performance is one that should definitely be held on to. There were so many obstacles that could have held us back; however, we decided to use them as motivation. We had to manage contact restricted practices, numerous routine changes, injuries and compete a level up against D1 schools but we gave it our all, did and submitted our best and everyone is and should be, ecstatic about the outcome,” Duncan said.

Due to COVID-19 restrictions, teams submitted videos of their performances instead of performing in person in Orlando, Florida. The Nationals date was pushed back from its usual January slot, but the cheer team lost practicing opportunities due to there being fewer games for many of the sports where the cheer team performs. Teams submitted their semi-finals performance and then receive feedback with the hopes of improving upon the routine before submitting another video for finals. That’s what happened for MSU, as their score improved from 90.9667 to 91.7.

“Of course, there was that initial heartbreak when we found out we wouldn’t be competing on mat in Florida,” Duncan said. “There’s just something about that feeling of constantly practicing, and constantly being watched by other teams and your competition. After a couple minutes of letting the new information set it, everyone was excited and optimistic about this competitive opportunity. We didn’t have that adrenaline rush like when you walk onto the mat and see all the people, the lights or the cameras so it felt as if performing was much harder, tiring and time-consuming. The hardest thing was waiting on the results and then waiting on our critiques to rework the routines for finals! I guarantee that everyone will say they would much have rather competed in Florida, but I’ll tell that our team, our family, looked at it as a blessing and gave 100%.”

The Game Day category is made up of three routines on which the team is scored on. The team performed exceptionally in the fight song and time-out routines, but scored less favorably in the sideline routine category, perhaps due to them not performing in the way Stokes thinks the judges were expecting.

“For Game Day our team performs three different routines; fight song, sideline chant, and a time our performance. Our team scored extremely high on our fight song routine and time-out routine. We lost points on our sideline routine. It’s hard to know exactly what the judges are looking for, this year for side-line chant they wanted to see more stable stunts along with different sign work,” Stokes said.

Stokes said she was grateful for her seniors who gave it their all this past season. She also has high hopes for the returning team, following their recent success with a third-place finish in 2020 and now a second-place finish in 2021, and thinks they have what it takes to go for gold.

“We have three seniors graduating this year. These three ladies have been amazing leaders on this team and I am thankful they were able to compete one more time. We have a lot of returners coming back to the team next year. My hopes are that we can expand on our success from this year and return to Nationals next year with a strong routine. Last year we placed third, this year second, we hope next year we can do one better,” Stokes said.