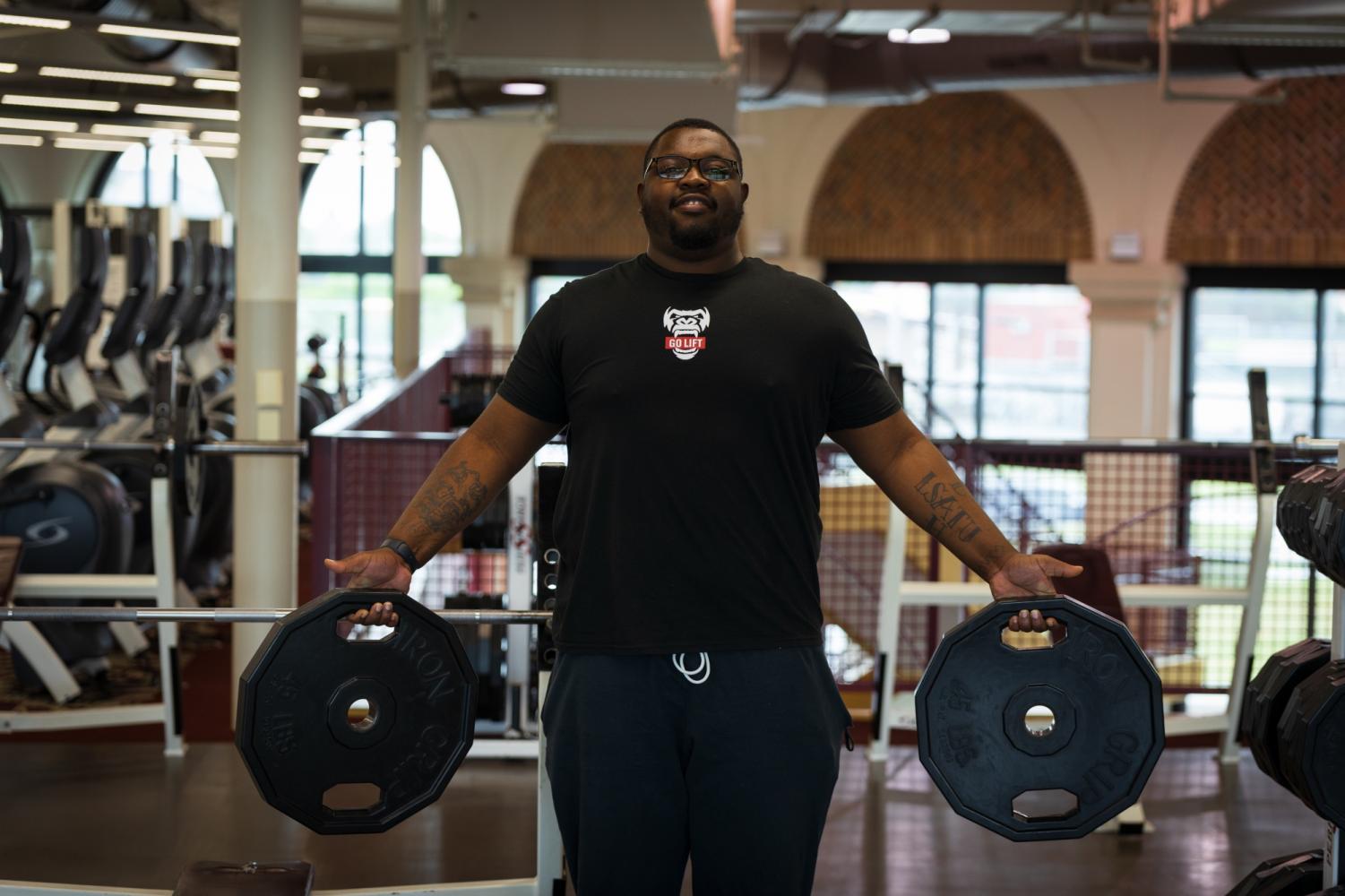 Edwin Bah, graduate student of sports and leisure, lifts at the gym.

Edwin Bah: The man behind the “Go Lift” movement

“Being an entrepreneur means setting my family up for generational success,” Edwin Bah, graduate student of sports and leisure, said. “I feel like when people hear the word entrepreneur they just think of self, but to me it’s about longevity, it’s about setting yourself up, so that you don’t have to work anymore.”

Tired of trying to fit inside a box everyone else wants to fit him in, Bah broke barriers by shutting out what others thought he could or should do and trusted his intuition.

“I don’t want to work for anybody,” Bah said. “I want to be my own boss. Seeing people like Mark Cuban, Elon Musk and Jeff Bezos, motivates me to go above and beyond for my brand. I can’t stop and I won’t stop.”

It all started during his senior year of undergrad while celebrating the legacy left behind by Robert Grays, an MSU football payer who died on the field. To honor his legacy, Mustangs took the challenge to do 24 push-ups in reference to Grays’ jersey number. Twenty-four push-ups seemed easy enough for a past all-state football player, but he would soon come to find out that the strength he spent years building on, slowly disappeared as he left that lifestyle on the back-burner. Disappointed that he could only do seven push-ups, Bah went to the only place he knew could help.

“We started going to the gym every day and we never missed a day, sometimes we even went two times a day,” Bah said. “My roommate, Ashley Hill, and I were determined and that determination sparked a movement.”

What started as Snapchat posts encouraging individuals to “Go Lift” led to a simple T-shirt design of a stick man with the bolded words “Go Lift B****” surrounding it. It’s simplicity resonated with people and in the first day of selling shirts they were sold out in less than 24 hours.

“At that moment we knew we had something people wanted to buy,” Bah said. “We immediately started playing around with the image and sending off our ideas to graphic designers. From that moment on we took it seriously, and that’s the reason why the brand is what it is today.”

Driven by his competitiveness and desire to be the best and number one at whatever he puts his mind to, Bah won’t just stop there. Focused on creating six streams of income for himself, Bah says the “Go Lift” movement is just a leg of the table he’s trying to build.

“My number one goal in being an entrepreneur is to be the best, I want to be number one,” Bah said. “After graduating from undergrad and facing the real world, seeing how hard it is to get a job, I realized I had to create my own lane of success.”

His unique stance on success follows closely through his movement.

“If I can do it, you can too,” Bah said. “It all goes back to the person who made me realize that I appreciate my life, which is Robert Grays. You have legs, you have a life and you have a beating heart so go do it. Don’t be lazy and don’t waste your days on this Earth wishing you did, just go do it now.”

Despite his efforts, being a Black entrepreneur in this world climate can present some challenges of its own. Bah explores the struggles of being a small business owner and a Black man in America, he says mixing the two together can be disastrous at times.

“There’s no launching point for us,” Bah said. “It’s all pity parties and people just feeling sorry for you. We need more inclusion of Black entrepreneurs, we need a safe space for black entrepreneurs and I feel like a lot of companies and institutions just don’t do that for us.”

Although Bah faces new challenges every day, he turns every negative into fuel for his success. Bah says it’s 365 days in a year and sometimes you’re going to have a few bad days here and there, but what matters the most is what you do after those bad days; do you keep going or do you let those bad days eat through that motivation and drive you’ve built?

“A lot of people are wishing on your downfall and it’s hard to find people who genuinely care about your Black business, but I surround myself with people who know my pain and my experiences and we support each other,” Bah said.

He’s a man of resiliency and he has just barely cracked the surface of his success. He hopes in the next five years his brand can reach a more diverse audience, and he plans to be more inclusive in his clothing items.

“I hope the legacy will be that some crazy college kids actually put their dreams into fruition and that someone else can do it too, it’s just that easy,” Bah said.

4 Responses to “Edwin Bah: The man behind the “Go Lift” movement”