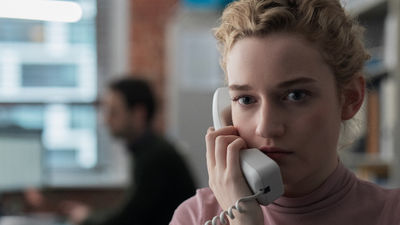 Julia Garner in The Assistant (2019) (Photo courtesy of IMDB.com)

“The Assistant” is a valuable commentary but not a blockbuster

“The Assistant” is set in a New York film production office, where a receptionist endures condescension, belittlement and gaslighting from her co-workers. This gaslighting happens as a consequence of the receptionist discovering various clues alluding to sexual harassment.  Through a 24 hour interval, we follow Jane, played by Julia Garner, to her “first one in, last one out” job, where she discovers an earring in her boss’s office. After this, she is pressured by her male co-workers to answer her boss’s wife and explain away the film executive’s constant absences and suspected infidelity. Garner’s convincing portrayal of uneasiness and conflict during this phone call is very compelling, as is her performance throughout the movie. As with many other moments in the film, the scene is punctuated by a phone call from the unnamed film executive, who verbally abuses Jane for unsuccessfully veiling his adulterous behavior. As the film progresses, Jane not only uncovers the “revolving door” apparatus that the film executive has cultivated but discovers how callous and accepting her co-workers are towards the boss’s behavior.

The movie is clearly inspired by the infamous network that Harvey Weinstein cultivated throughout his career. Even though the boss is never named or shown throughout the film, his gruff, distorted and deep voice clearly mirrors Weinstein’s.  The film also convincingly telegraphs how employees are suppressed into submission, by the various strings pulled by executives. However, the film also telegraphs the condescending and patronizing attitude male employees get away with, represented by how Jane is treated by her male co-workers. Portraying these interactions, the actors all balance on a double edge sword of realism, admirable in craft but painful to watch, as their convincing portrayal is a reminder that these power dynamics still exist today.

“The Assistant” is not a blockbuster film. You won’t hear a sharp violin sound every time sexual harassment is ignored or alluded to. You won’t see Jane walk in on her boss assaulting someone. You won’t see a climactic, Sherlock Holmes-esque reveal where all the clues are cut together in a montage. The film is not sensational or dramatized. You are a passive observer of an assistant, working in a dingy office space, demeaned by male employees, ignored by others, going through mundane tasks and discovering all the signs of sexual abuse, except everyone else acts like it doesn’t exist.  While I wish some scenes were cut down to provide a more accessible movie for audiences, the film in its present form expects you to pay attention, get caught up in the atmosphere of the movie and put yourself in the shoes of the assistant, as she navigates the predatory world of big city business.

If you are expecting a sermon preaching against the patriarchy and denouncing all of the misogyny in the workplace, you will be disappointed by “The Assistant”.  If you are expecting a realistic, documentary-style, atmospheric portrayal of what working in a claustrophobic, gloomy, Weinstein film office would feel like, you will enjoy “The Assistant”. This isn’t to claim the movie doesn’t have anything to say.  Because the film only subtly hints at the transgressions of the boss, the audience gets a sense of how easily deniable these accusations were, among executives and employees.  Not only that, the audience feels the anxiety and fear that Jane endures as she attempts to report these signs of sexual assault, as the HR reps and other co-workers act as though nothing is going on.

The subtlety is evident in the Rotten Tomatoes score for the film: a 92% critic score and a 25% audience score. Those expecting a mystery thriller, involving a defiant and charismatic female protagonist, were sorely disappointed. As mentioned before, the clues are as little as finding an earring or hearing a small piece of dialogue about the boss leaving for a five-star hotel.  While most modern audiences expect a film to lay everything out on a silver platter, “The Assistant” expects viewers to pay attention, to take their time and piece together the power dynamics and strings being pulled, behind the scenes of the gloomy office.

The film could have been trimmed down to offer a more concentrated dose of its message and render the film’s themes more accessible to a general audience.  However, as it stands, “The Assistant” is a well-made movie that, given the patience and attention, provides a skillfully crafted portrayal of workplace abuse, from small degrees to significant. I’m giving this one a 4/5.