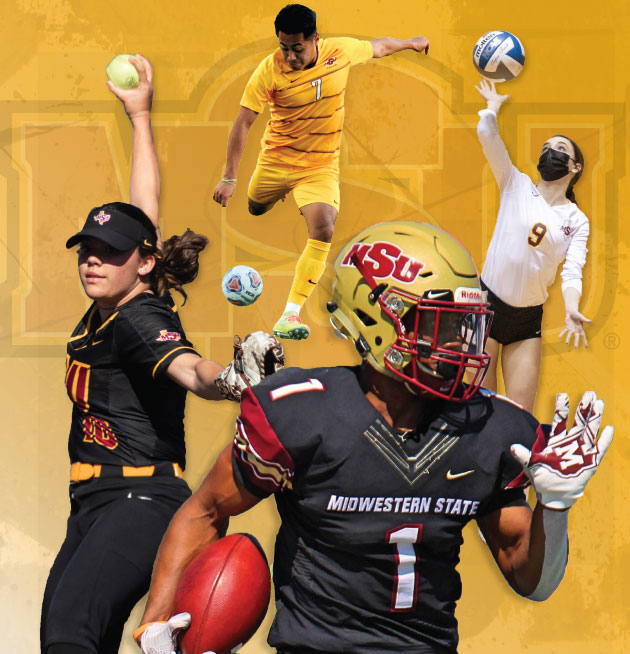 Keeping up with the Mustangs. (Graphic by Omar Combie)

Keeping up with the Mustangs.

Checking in on the Mustangs’ seasons

MSU Texas athletics is back in full effect after a long stalling year due to COVID-19.

It’s been a year since the Mustangs have taken the field. The MSU football team is 1-0 and also won their only scrimmage 28-14 against Southern Oklahoma on Saturday, Feb. 27 at home. Michael Ajayi (No. 33), running back and sports and leisure junior, had two rushing touchdowns and 48 yards. Four quarterbacks threw the ball for MSU: Matthew Yelverton (No. 18), business finance redshirt freshman, Triston Williams (No. 19), agricultural business junior, Zachary Bohannon (No. 13), undecided freshman, and Derrick Ponder (No. 12), applied arts and sciences senior. In total, the Mustangs accumulated 291 yards and 18 first downs.

On Saturday, March 6. to officially open the spring season, the Mustangs faced Texas A&M-Kingsville at 1 p.m. at home, crushing them 45-34. Although TAMUK was not far behind Midwestern after the first quarter, MSU was able to confidently secure a lead in the second quarter 14-7. Ponder threw for three touchdowns and 349 yards. K’Vonte Jackson (No. 1), running back and kinesiology junior, scored two touchdowns and senior Jovane Parkinson (No. 20), cornerback and Masters of Sports Administration senior, scored in the fourth quarter ultimately ending the game.

The next chance to watch the Mustangs play will be Saturday, March 20 at 6 p.m. at Tarleton Memorial Stadium.

Men’s soccer and their dominating season

The men’s soccer team dominated March 2 against Lubbock Christian University, with a final score of 3-0. In the first match of the Lone Star Conference, Trevor Amann (No. 9), forward and mathematics senior, already had scored two goals before the second half even began. Mere Escobar (No. 22), forward and undecided freshman, scoring in the second half securing the win. Marc-Antoine Huzen (No. 29), junior goalie, saved three goal attempts by LCU.

In their second game in conference, MSU played in Oklahoma City, against Oklahoma Christian University on March 6. However, the men’s team suffered a loss, with a final score of 2-1.

Carlos Flores (No. 17), midfielder and kinesiology senior, assisted Julian Barajas (No. 20), midfielder and undecided senior, who scored in the first 20 minutes of the game. Oklahoma Christian scored before the end of the first half, then again in the second half with MSU not managing to get another goal.  Midwestern had 13 attempted shots, four corner kicks but was not able to succeed.

On March 9, the men made their way to UT Tyler and made the field their own. Winning 4-0, Toi Yamakoa (No. 14), forward and kinesiology junior, opened the game by scoring in the first five minutes. Amann scored just one minute after Yamakoa, and another just three minutes after, securing a dominating lead. In the second half, Yogi Vargas (No. 19), forward and criminal justice senior, scored the last goal, closing the game.

The Mustangs will take on Texas A&M International, Saturday, March 13 at Stang Park at 5:30 p.m.

Women’s soccer looks to turn around their season

The women’s soccer team faced Dallas Baptist University on March 3 at Stang Park. The women’s team that is 1-3 for the season and 1-2 in the conference, was not able to overcome DBU. The Mustangs scored a goal in the second half after DBU scored two in the first. Nicole Marsolek (No. 2), defender and general business sophomore, marked her fourth career goal with the one she made during the game.

The women also played against West Texas A&M on March 6. Although the team suffered a crushing defeat, with a final score of 4-1, Valentina Carvajal (No. 13), forward and business senior, made her first goal as a Mustang. In total, the team had 12 goal attempts, two corners and nine saves.

The women’s soccer team was able to dribble past UT Tyler at the 1st Bank-Perkins Soccer Complex on March 10, winning 1-0. Carvajal, scored a goal, winning the first game for the women’s team this season.

Men’s basketball wraps up the season

The men’s basketball will return to the season in the fall of 2021.

Women’s basketball closes out the season

The Mustangs took on Cameron University in the Lone Star Conference quarterfinal, causing the women’s season to come to an end after a successful 11-7 season. The game was held on March 2 at Cameron. Throughout the game, Cameron led the scoreboard with MSU unable to catch up.

, led the team for most scored points with 32 in total. Hannah Reynolds, (No. 11), forward and health sciences senior, contributed 15 points, making the second most shots. Haevyn Risley (No. 15), guard and business finance junior, and Frances King (No. 10) guard and kinesiology sophomore, each scored 12 points.

Though the season is over, Lenahan and King were named to All-Conference Teams. Haevyn and Reynolds received honorable mentions, voted on by 18 head coaches.

The Men’s tennis team is 4-3 and has won their last four outings, after losing all three contests at the ITA National Team Indoor Championship.

Alex Martinez Roca, mechanical engineering junior, and Alexandre Crepy, general business freshman, each have 4 singles wins, and Angel Palacios, management information systems senior, had five. Crepy and Roca as a team are 4-3 in doubles matches, and the duo of Palacios and Ben Westwick, mechanical engineering sophomore, is undefeated with three doubles victories.

Women’s tennis is on a hot streak in March

The women’s tennis team is 4-4, and has won each of their four consecutive matches in March.

The team shutout Southeastern Oklahoma and Oklahoma Baptist before beating Southern Arkansas 4-3 and Metropolitan 6-1. During this winning streak, the women haven’t lost a single doubles match.

On  March 3 at the D.Ligon Coliseum, volleyball won against Cameron University 3-0.

The team had a second opportunity to crush Cameron again – which they did on March 4. 3-2. Bourne had 12 kills, one ace, four blocks and twenty digs.

Volleyball went up against Arkansas-Fort Smith on March 9 and had a final score of 3-2. The women had 56 kills, 53 assists and ten aces. The women attempted to attack Ark.-Fort Smith again on March 10 but lost 3-1. ending their regular season and finishing second in the LSC North Division conference.

Track up and running in the spring

Katie Till, athletic training senior, has been a standout for the Mustangs this season. Till set personal records with a 4:57.44 time in the 1,500-meter time of to take second at the Hardin-Simmons Invitational and a 2:21.60 time at Gorilla Indoor Classic in the 800 meter. Till also placed third at the Lonestar Conference Indoor Track Championships in the 800 meter with a time of 2:23.71.

Softball off to a strong start

Softball had a great week winning all games on March 5 and March 7, making their winning streak 6 and overall season 11-3.

On March 5, the women’s softball team had two games against UT Permian Basin at Stang Park. A great start to the LSC conference, the women snagged both wins that night. In the first game of the night, the Mustangs finished with a score of 3-2. For game two, neck and neck, the women were able to secure a win 7-6.

March 7, softball performed with nothing less but perfection with a 10-7 win against Western New Mexico that moved the team to 4-0 in the LSC conference. In the first game, MSU had a total of 10 runs in both games with Western NM unable to keep up. Ashley Turner (No. 5), infielder and undecided sophomore, and Carson Solis (No. 3), first baseman and education junior, helped bring the score to 3-2 at the end of the first inning. Mattye Tyler (No. 21), pitcher and psychology sophomore, had two home runs.

Softball had a doubleheader game on March 10 at Stang Park against South Eastern Oklahoma. The women put up a fight but were unable to defeat SOSU. Game one ended with a score of 3-1 and the second match 9-1, dropping first home matches.

Softball will have an opportunity to redeem themselves on March 12. against St. Mary Texas in San Antonio at 4 p.m.

The men’s golf team has participated in one tournament in Spring 2021, the Houston Classic on Feb. 8 and Feb. 9. With scores of 73, 71 and 70 Garrett Leek, management sophomore, finished third. Jake Doggett, management junior, finished fifth and the team as a whole finished fifth as well.

Women’s golf has participated in one tournament so far in the spring season, the St. Mary’s Invitational. Juanita Gomez, marketing junior, was top of the leader board on March 1. at the event. Gomez went on to place second at the Invitational on the second day. The Mustangs finished fifth overall in the tournament.