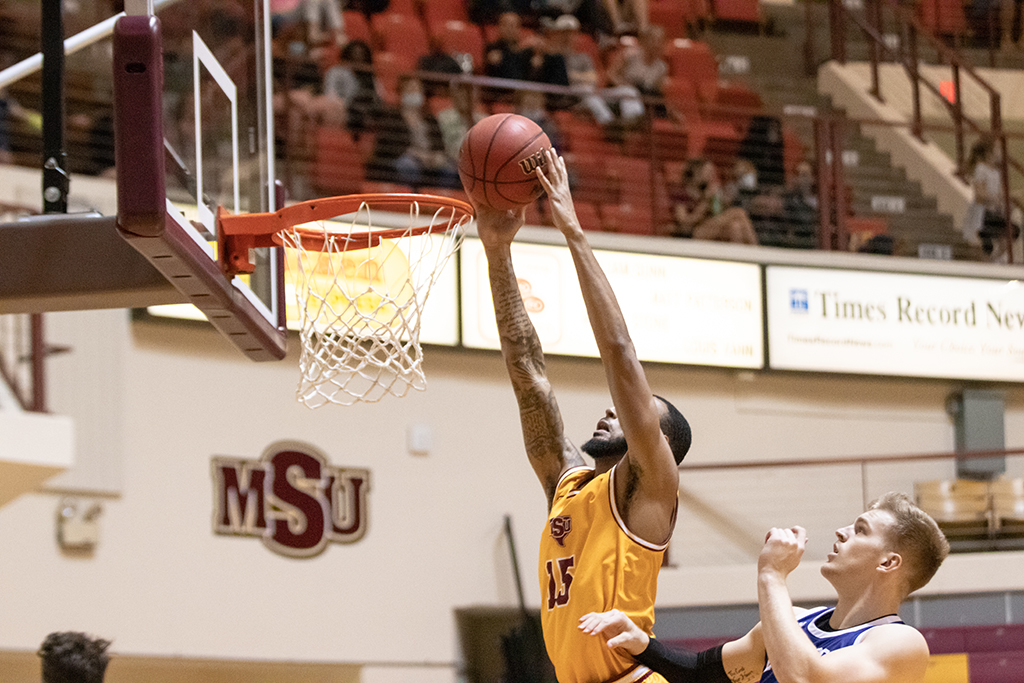 On Saturday, MSU Texas Men’s Basketball team faced Lubbock Christian University in a heart racing battle that the Mustangs lost in overtime with the final score being 83-82 at the D.L Ligon Coliseum on Jan 30.

Nick Powell, assistant men’s basketball coach, said overall the team had a good game plan coming in but took too long to start executing it. By the second half, MSU was behind LCU with the score being 28-36.

“To beat a team like Lubbock Christian you just have to play for 40 minutes, we played for about 20… we missed to many opportunities early on in the game and came out flat,” Powell said.

Powell, however, did praise the team for their defensive effort in the second half, finishing the regulation 75-75 and forcing the game to go into overtime.

“They did a good job defensively, disrupting some things and we finally adjusted…. We need to bring more intensity, the games are a little sped [up], so we got to pick up our practice intensity; that’s what we’ve been focusing on the last two days and it showed tonight. We have six games left; they are all must win games from now on. We have to make top eight in conference, go to the conference tournament and then hopefully do good there,” Powell said.

Pierre Sanders (No. 23), guard and accounting freshman, had a total of 13 points, six rebounds and one three pointer. Sanders was one of five Mustangs to finish with double-digit points.

“Overall, I feel like I did alright, [but] there are things that I need to work on. As a team we played a decent game, we could’ve played harder all 40 minutes, communicated more and do a lot more little things,” Sanders said.

Terrell Wilson (No.10), guard, business marketing junior was able to come back strong in the second half after not making any shots in the first quarter. Wilson made a total of 11 points, with two rebounds and one three pointer.

“I could’ve played a little bit better, from a team standpoint I got everyone involved and we worked together as a unit everyday, and it translated onto the court. I want to be more knowledgeable of everything happening on the court; off the court I want be more observant on plays and personnel. In the games to come, you guys should expect more energy to come from me,” Wilson said.

The next chance to watch the Mustangs will be Friday, Feb. 5 against Oklahoma Christian University at the Payne Athletic Center in Oklahoma City at 5:30 p.m.