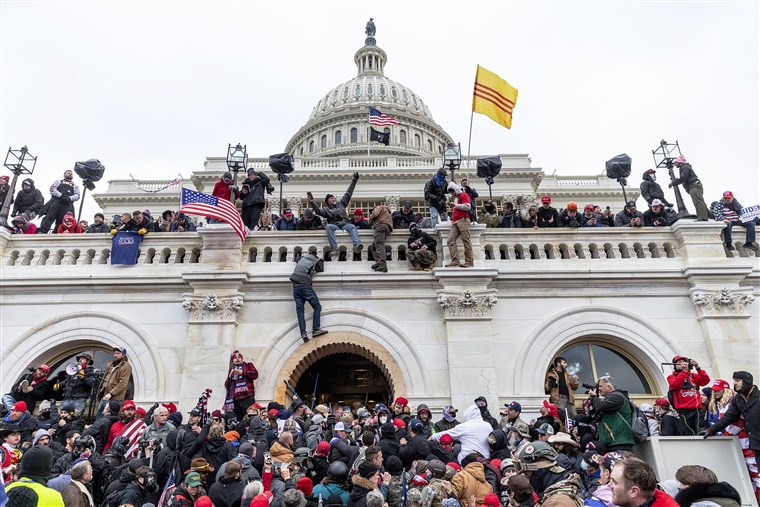 In early January, two millennia ago, the Senate of the Roman Republic attempted to strip Julius Caesar of his military command and render him a private citizen.  In response, Julius Caesar led an army into Rome, eventually seizing authority from the centuries-old republic and becoming dictator.  The senators who attempted to make Caesar a private citizen fled the legislature and capital, in order to avoid capture.

In early January of 2021, Congress attempted to certify the results of the electoral college, which would render Donald Trump a one-term president.  In response, a violent mob stormed the United States Capitol building. In this temple of democracy, these insurrectionists killed a police officer, ransacked congressional offices, and successfully occupied the legislative chamber. These thugs, carrying explosives and zip-tie handcuffs, could have easily held elected officials captive, entering hostage negotiations and delaying the electoral college for days or even weeks, in order to keep President Trump in power.  Thankfully, representatives and senators fled the chamber just in time, in order to avoid capture.  The capitol police secured the building by dispersing the insurrectionists, and Congress went back to certifying the presidential election, ensuring President Trump’s eventual status as a private citizen.  We are very lucky that our institutions held strong.

The whole catalyst of the event was President Trump telling senators to overrule the results of an election, in order to prevent his term’s end.  He made this plea in a rally just before the coup attempt, where he said, “We’re going to walk down to the capitol… because you’ll never take back our country with weakness.”  Even though the President never marched with the mob-like Caesar marched with his insurrectionists, his incitement of the coup and his plea to toss out election results is still terrifying.  If Congress followed the demands of Trump and these terrorists, we could have easily seen President Trump win a second term, without winning the electoral college, not to mention losing the popular vote.  This disdain for democracy goes further.  Far-right commentators looked at the sea of Trump memorabilia and blamed Antifa, which is not the first time political actors have used scapegoats.  However, it’s still terrifying to see a cheap, authoritarian trick used in our centuries-old republic.  Some Americans even equate the occupation of our legislature to the BLM riots last year: as if the violence displayed then would have installed an unelected leader.  This is another tactic from the dictator cookbook: leveling sloppy accusations of hypocrisy instead of taking responsibility (see the propaganda tactic, Whataboutism).

Claims of election fraud animated this capital siege from start to finish.  John F. Kennedy once said that “[T]hose who make peaceful revolution impossible will make violent revolution inevitable.”  These insurrectionists felt as if their votes were thrown out in a “rigged election,” and they aimed to stop that “rigged election” from being certified.  This is why false claims of voter fraud are so dangerous.  When you constantly convince your supporters that the peaceful revolution, an election, can’t be trusted, you cause those supporters to naturally drift towards a violent revolution.  The FBI, 50 state legislatures, and our own Supreme Court have already agreed that no widespread voter fraud occurred.  If you still believe that this election was stolen, you are buying into another ingredient of authoritarian rhetoric: a large scale conspiracy orchestrated by a particular enemy.  According to Umberto Eco, a cultural theorist who summarized the principles of fascism, fascist societies require an obsession with an enemy plot against their leader: an enemy that is “at the same time too strong and too weak.”  To the far right, who use slogans like “crying lib” and “snowflake,” Democrats are seen as overly sensitive and, in Trump’s words, evoking “weakness.” Yet, they have successfully orchestrated a plot against the president, involving the media, our own intelligence agencies, and our own judicial and electoral system from local to federal level. Those who hold both of these ideas in their heads believe the Democrats are equally weak and aggressively strong.

Benjamin Franklin famously said our form of government is “[a] republic if you can keep it.”  If we wish to keep our centuries-old republic, we cannot allow these hateful conspiracy theories to infest our politics any longer.  A strong predictor of a coup attempt is a previous coup attempt.  If we do not want a repeat of January 6 on Inauguration Day, we must collectively agree that everyone who voted to overturn this election and concede to the delusions of terrorists should never hold elected office again.  If we do not unify against this threat, I say in sadness that I am convinced we will lose our republic to another Julius Caesar.