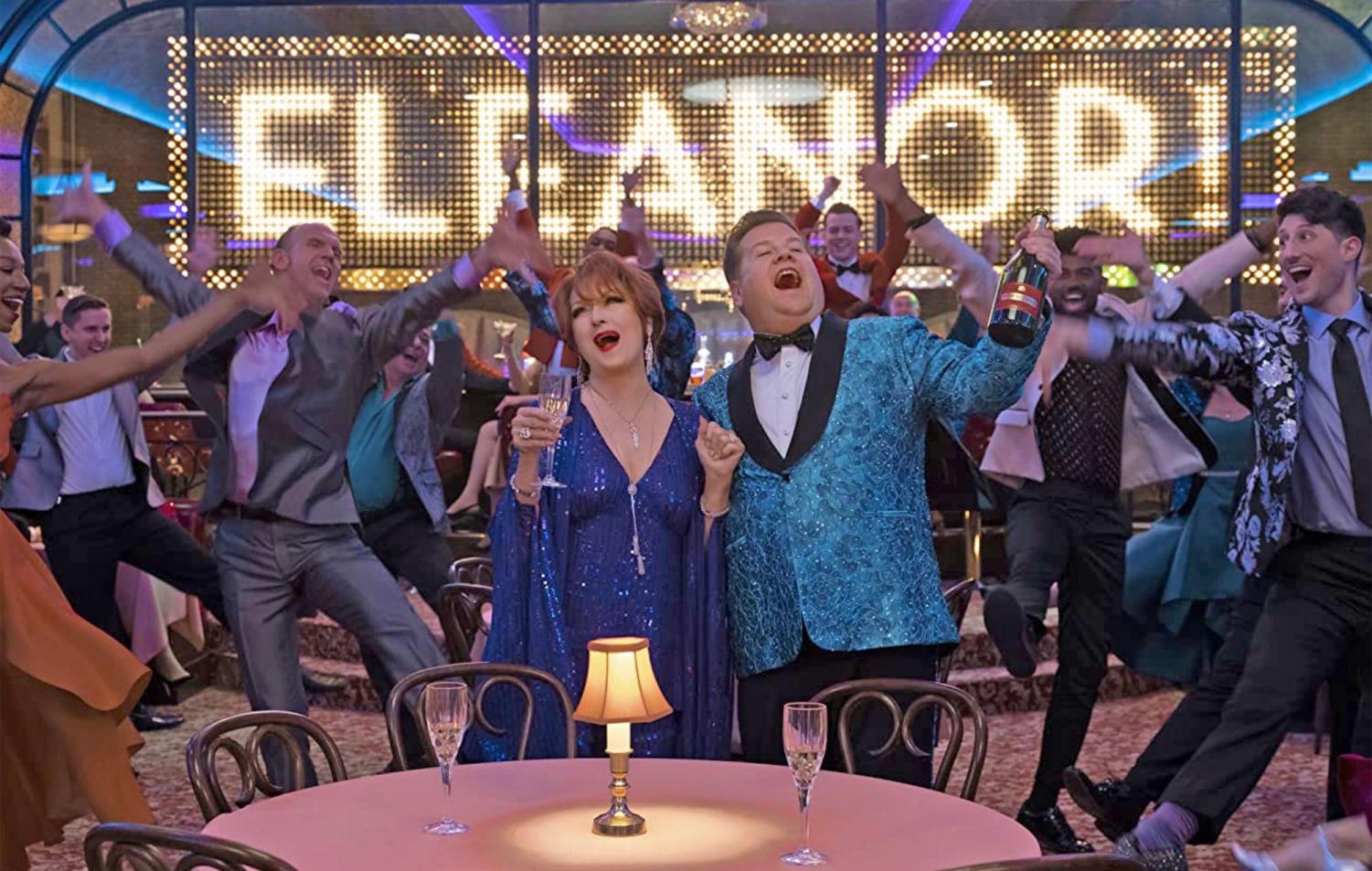 Meryl Streep and James Corden in The Prom (2020) on Netflix (IMDB.com)

Meryl Streep and James Corden in The Prom (2020) on Netflix

Netflix’s ‘The Prom’ is a splashy but disappointing mess

What do you get when you combine musical theater, a Netflix-sized budget and a grab bag of celebrities? A mess.

Netflix and Ryan Murphy (Glee), along with a gaggle of big-name actors, have teamed up to bring the lights of Broadway to screens across the nation with their overbaked and sugary sweet adaptation of the Broadway musical “The Prom.”

After getting poor reviews for their newest musical, two stale Broadway stars Dee Dee Allen (Meryl Streep) and Barry Glickman (James Corden) need a popularity boost. Overwhelmed by the prospects of solving world hunger, these two, with the help of a ragtag duo of Broadway busybodies (Nicole Kidman and Andrew Rannels) decide to march down to Indiana to fight injustice. Their righteous cause centers around a meek high-schooler named Emma (the ingenue Jo Ellen Pellman) whose prom was canceled by the PTA when she announced she was bringing her girlfriend as a date.

The Broadway stars protest and picket, singing huge numbers and sweet ballads, all in hopes of swaying the hearts and minds of those stubborn Midwesterners and maybe getting a crumb of good publicity along the way. When Emma brings the fight back down to Earth-sized proportions with a heartfelt tune, the thespians and PTA both learn a neat little lesson that you can see coming from the opening bars.

Maybe this message of tolerance and compassion would have come across as more earnest onstage, but it feels like this film adaptation’s main objective is to give big names like Nicole Kidman, Andrew Rannells, James Corden and Meryl Streep an excuse to sing, dance, and showboat on screen. The sweet little storyline never stands a chance next to the neon light and sequenced costumes of the stars.

My favorite parts of “The Prom” included newcomer Jo Ellen Pellman as Emma who gave viewers a few minutes to catch their breath between the other stars scrambling for screen time and sang her songs simply and genuinely. Each scene she was in seemed to get the film back on the right footing. I can’t wait to see what other projects she joins after her turn here.

I admire the effort to preserve musicals as movies, but “The Prom” struggles to fill the often oversized shoes of traditional movie musicals. The high-school themed story feels more at home as a Netflix original teen movie instead of a splashy musical bursting with A-list celebrities, and the low stakes of the plot and high intensity of the production can make the 2 hours feel like a drag.

“The Prom” is a difficult film to discuss because everyone falls into two camps the moment they see the trailer: either this is a theater-lover’s Christmas gift from Ryan Murphy, or you’ll be miserable the whole time. For what it’s worth, I encourage you to give it a shot over the holiday break, but even I admit that this is no “Hamilton.”