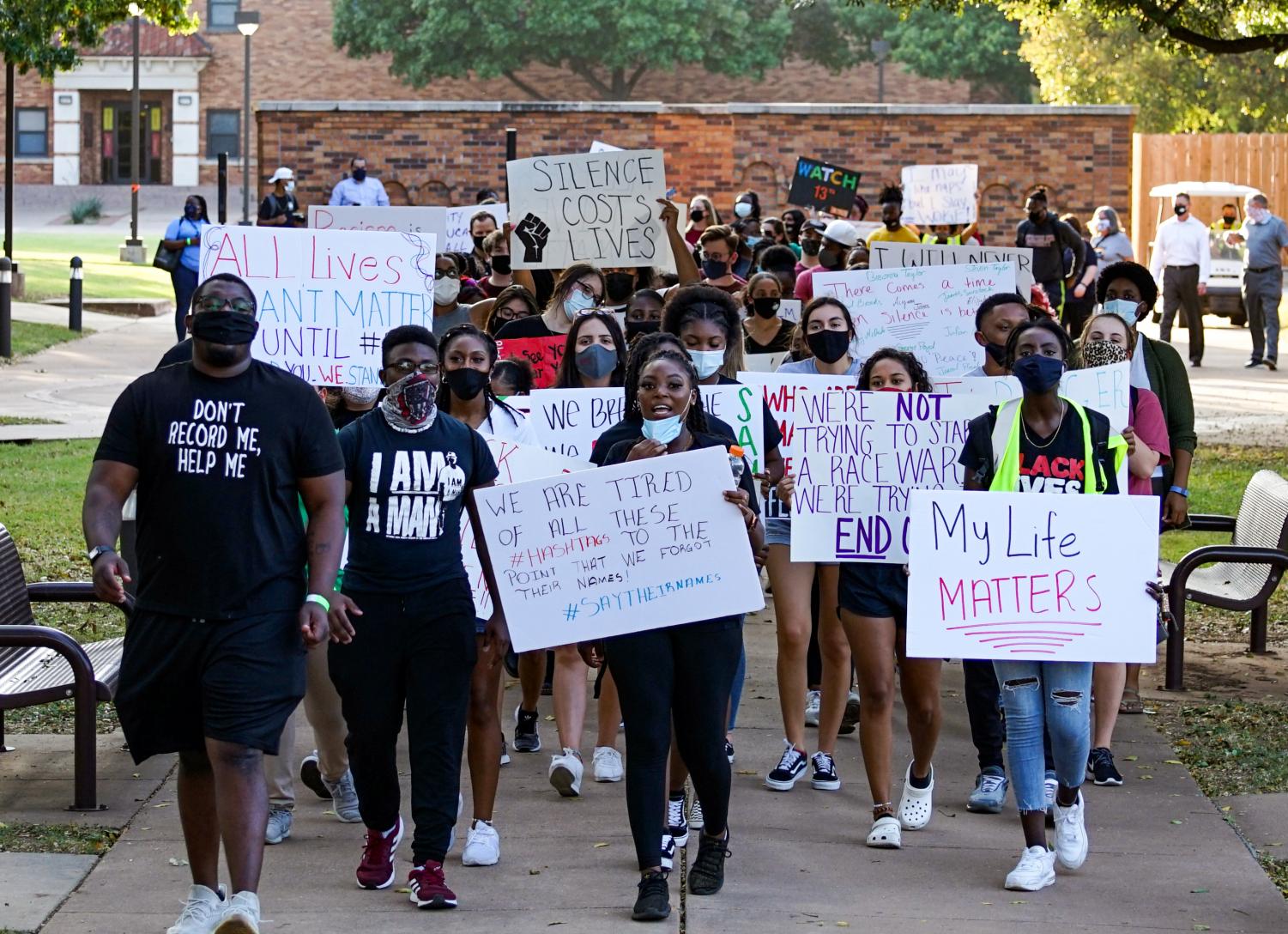 Students chant “say her name” as they walk for the March for Peace event, Oct. 14. (Bridget Reilly)

Students chant “say her name” as they walk for the March for Peace event, Oct. 14.

“I [have] wanted to do this event since the summertime when I was completely overwhelmed along with the world at the death of George Floyd, so as a peer educator, I really made it adamant that we need to march, and I wanted to be the one to lead it, because I care about fellow Black lives. I care about justice, so I didn’t care when we did it, but it needed to be done,” Keza Muvunyi, mass communication junior, said. “I wanted to be the one leading it just to give other MSU students the option to stand with me because I know on social media it’s easy to protest or easy to show your support, but walking and chanting, and doing all that is even better. It gives you the feeling of ‘I’m here. I’m fighting for you, and I showed up for you.’ There’s nothing better than when someone shows up for you right? So I wanted to show up on behalf of all Black people, so that’s why I created it. I wanted to show up for Black people, and I wanted to give MSU students the opportunity to show up for Black people.”

To make her speech more personal, Munvunyi concluded by prompting audience members to imagine if their loved ones were the next innocent lives lost to injustice, as a call to action. It’s a call to action that some students have already taken on such as nursing freshman, Amani Augustine, who attended the event in support of her people.

While some students attended the March For Peace to stay connected with their roots, others attended because they wanted to see a change on campus.

“[I attended the March for Peace] because there’s some changes that need to be made to our environment. I feel like there’s a lot of racial insensitivities that goes on a daily basis around here, and I’m not saying it’s intentional, sometimes it’s just people don’t know,” Iris Buchanan, biochemistry junior, said. “I will say that we got a lot of growing to do here, a lot of growing. I haven’t really seen any changes being made. I know for a fact that I’ve had my fair share of racial profiling and indifferences, so we got growing to do, we got a lot of work to do. We just need to do better.”

As students call for change on campus, MOSAIC Cross-Cultural Center director, Cammie Dean agrees that there hasn’t been enough time to enact it but also acknowledges the initiative of students for starting these conversations.

“We haven’t had enough time to really enact change on campus when it comes to policies, procedures, the names on buildings, whatever the case might be…I think the efforts of the students have been able to at least get the conversation going, to get students more comfortable with saying what they believe, what they think is going on, to putting clear labels on racism, on police brutality [and] on inequities that are based on cultural differences and that in it of itself is an accomplishment,” Dean said. “Students are more comfortable at least even having the conversation because a year ago we weren’t, we weren’t even having the conversation, so in that way we are moving forward; it’s a step in the right direction.”

According to Dean, this march was one step in the right direction, but this is still the beginning.

“We have work to do and this is why we have a 21-Day Racial Equity Habit Challenge beginning to acknowledge our role in both the problems and the solutions and then beginning to take action,” Dean said. “There are two whole other steps to go at least before we can really say an environment has changed but we’re off to a good start.”

As Dean points out that the March for Peace is just the beginning, students such as Jamilah Kangudja, graduate student of educational leadership and president of the Black Student Union, agree. She thinks it is important to hold events like this to raise awareness in the community.

“Some people are oblivious to things. Some people just don’t know, so if we can host events like these to ensure that people are aware of what is going on around the world, and ultimately our goal is to make our institution anti-racist. It’s not enough to just not be racist. We should be against racism. We shouldn’t allow it, and that’s why tonight we’re working with the MOSAIC Cross Culture Center to put on a 21-Day Racial Equity Challenge so that people can learn it’s more than just being Black. It’s more than being any other race or whatever it is. There’s so many isms that exist in this world, and we should be aware of them, so you can be anti and against them,” Kangudja said.

The March for Peace was followed by the Living in Our Skin event, both working together to bring awareness to the social problems in the world as stated by Kangudja. These events are important because they highlight how racial justice pertains to everyone according to assistant professor of English, Hillary Coenen.

“Racial justice is everyone’s issue. Racial justice is up to everyone to do something about, so I feel very committed to making a public stand of not standing for oppression. It’s really good to see so many people from the community participating in it,” Coenen said.

The March for Peace brought mustangs together, but as Muvunyi states, change does not happen in one day.

“It doesn’t matter if you’re Black, you’re white, you’re Asian… whatever race you are, it’s caring about humanity, and it’s caring about the person right next to you. It’s caring about everyone in this little area. That’s what it is, and that’s what we’re fighting for, so today you’re choosing to fight. You’re choosing to march for innocent Black lives lost. Tonight you’re going to educate yourself. Tomorrow and the next day after that, we ask that you continue to fight the good fight of a life that’s anti-racist,” Muvunyi said.