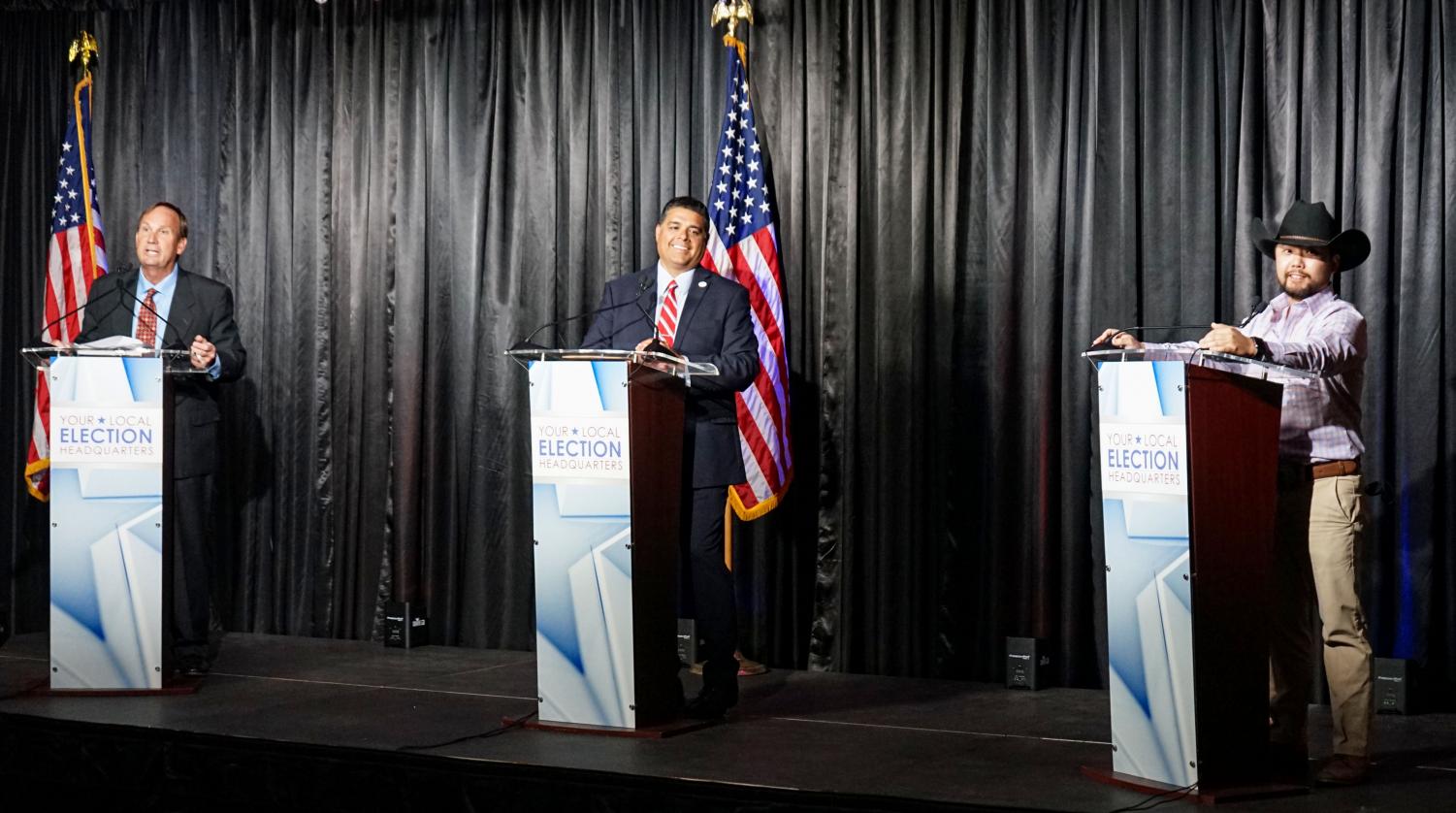 Candidates give their final remarks in the Wichita Falls Mayoral debate, Oct. 1.

Steve Garrison, director of the Redwine Honors Program and associate professor of political science, was a moderator of the debate. He shared how some of the issues the candidates discussed at the debate are relevant to MSU students.

“Obviously the economic growth and the issues with COVID are going to impact all of us, whether it’s going to school, what to do when you finish school, looking for jobs and being able to have a career,” Garrett said.

Santellana said he made one promise to the people when he was elected for mayor four years ago, and that was to work as hard as he could every single day.

“I’ve kept that promise,” Santellana said. “Frankly, honestly, as a young third-generation Wichitan, I never thought I would be sitting here at this podium serving proudly as the mayor of Wichita Falls, but here I am, grinning ear to ear next to these fine gentlemen, serving as your mayor, proudly. We don’t have to make Wichita Falls great again. Wichita Falls is great, and Wichita Falls has always been great.”

Stantellana also emphasized the importance of collaborating with leaders of various community groups such as the Chamber of Commerce, Sheppard Airforce Base and MSU. He said part of the reason he is running for reelection is that he wants to continue growing with these members of the community.

“When I talk about these collaborative efforts, people working together, it’s one of the first things that I want to do is make sure that we have all the community leaders, and we sit around a round table and kind of reprioritize ourselves. We have a strong, strong, strategic plan for city council right now, and those goals are working, and I don’t see a need for a change,” Santellana said.

Huling’s first impression of Wichita Falls was the road sign that greeted him with the words “Blue Skies, Golden Opportunities.” After competing in two seasons of the television series Big Brother, Huling returned to Wichita Falls and said he was shocked when he noticed the lack of entertainment in the town.

“When people come to Wichita Falls, they ask me ‘What is there to do?’ and me as a Wichita resident, it’s hard to tell them something that will really entice them,” Huling said.

Huling said he wants to create more programs and events for visitors and Wichitans to attend.

“I’ve always wanted to bring entertainment and look out for the younger generation of Wichita. I’m just an average, blue-collar citizen worker that works for the county at 14 dollars an hour. I have to support my family in that. That’s what I’m trying to press out to the public. Not only am I this guy from Big Brother, but I’m also very passionate about this city,” Huling said.

“I’ve always been politically active. In the last two years, I had concerns when you see our tax rates, that’s the main thing. When Stephen took office, we were collecting 29 million a year in property taxes. It’s up to 39 million. That’s a 35% increase. I want to know where the money’s going,” Hunter said.

Hunter has been self-employed for most of his life, and he says he has always been able to manage the almighty dollar.

“You’ve gotta quit griping, and you’ve gotta get in the middle of it. The people that don’t vote, I feel like you don’t have a right to gripe, but I’ve always been one of those that’s stepped up,” Hunter said. “I am a doer. I just believe in private enterprise, and this is what I’m running on.”

Huling said the stressful thing leaders are dealing with now is determining the right time for businesses to open at full capacity.

“The leaders of Wichita did what they thought was best at the time because they didn’t really know how to handle it. This is all new, new territory, new waters that they were having to deal with what no city had to deal with before, so at the time I think they made the right decision,” Huling said.

In Hunter’s opinion, the only one who knows when businesses and life will return to normalcy is God. He also said there should’ve been more consistency and equality on allowing bars to reopen.

“I think there have been some discriminatory situations when you see some of the bars around town that are selling food to everybody, and I’ve been a party to it, are drinking shoulder to shoulder, and some bar owners can’t open, but they’ve still got rent due, they’ve got payroll, they’ve got other bills to pay, and they’re still shut down from what I understand,” Hunter said.

Hunter felt that the city needs to focus more on revitalizing small businesses and less on other projects.

“Right now we’re spending money on a mural downtown when we’re in the middle of a pandemic. I know that has a lot of people irritated. Why are we spending money on something like that when we’ve got other necessary concerns that we need to address?” Hunter said.

Santellana revealed the struggle of trying to get money for local businesses as well as nonprofit organizations.

“Truthfully, we’ve had a lot of financial help from the federal government down to the state of Texas, but it hasn’t trickled its way to our community,” Santellana said. “The restrictions and the regulations they have on this money are so great that we can never get our hands on this money, so we’re begging for the federal government and for our own governor to take the handcuffs off.”

Each candidate had a different approach for improving business recruitment so that city residents and future MSU graduates have viable job opportunities. Hunter supports trade schools for those that aren’t interested in pursuing higher education.

“Does the younger generation want to work in a factory with those benefits? I would like to think so. My generation did. It wasn’t that bad,” Hunter said.

Santellana said his team is hiring another person in downtown development to recruit businesses out of town. He stated that the recruitment of new businesses isn’t possible with just one man. All city leaders must work toward the one goal of economic growth for change to occur, according to Santellana.

“It’s not just bringing people in. It’s making sure that when those businesses come in that we expand them and retain them. That’s how you grow your economic base,” Santellana said.

Huling used his experience from a small town in South Carolina to demonstrate the difference that business recruitment can make. He said the leaders of his city reached out to Continental Tire, and Continental Tire brought thousands of jobs to his city.

“If we’re not using our economic knowledge, our city leaders, our city managers and all our board members and Henry Henry Florsheimin with downtown development, we’re not going to get anything done,” Huling said. “We can sit here and talk about it all day long and run in circles, but if we don’t have someone that’s actually going to start from the top and work his way down because in every job and business they always say stuff rolls downhill, and that’s the truth. So we need to get on it, and stop talking about it, let’s be about it.”

Thoughts on Racism and the Confederate Monument

Santellana said he wouldn’t change the way he responded to the protests over the summer after the death of George Floyd. He approached the situation based on his value system, and he wouldn’t change his stance on the matter, but he said he wishes his statements about “turning a blind eye” weren’t misconstrued on social media.

“When I say I turn a blind eye, I turn a blind eye to the monument, not racism. Being a man of color, of course, I’ve experienced racism in my life, but I’ve been brought up to ignore those things. I’ll never fight hate with hate. MLK said it best, you can’t fight hate with hate. You can’t fight darkness with darkness. I’ve spent the last five years trying to knock down bricks between me and other groups. I’m not trying to put those bricks ahead of us,” Santellana said.

Huling said he understands the difficulty of the situation that Santellana was in, and he noticed that people will rant and rave on social media but won’t attend city council meetings, where they could voice their opinions.

“Mayor Stephen was in a tough situation going through,” Huling said. “With all the movements and the protests they have going on throughout the world right now, I think that the situation was misconstrued because I’ve known Mayor Stephen for a long time, and I personally don’t think that he is racist. I would say, me dealing with a lot of racism, myself being a minority as well, I would’ve definitely probably worded it a little bit differently.”

Hunter said he recently spoke with a man who is a minority and has also served in the military. The man said he viewed confederates as treasonous, and Hunter said he understood this perspective.

“The monument has been down there for years. Why does it need to be changed now? If it does, if the citizens want it, okay, let’s see about moving it or go to a general vote, but no special elections,” Hunter said.

All three candidates agreed that the city council should not re-examine law enforcement funding. Huling said anytime something goes wrong in Wichita, people’s first reaction is to call 9-1-1.

“If we’re sitting here cutting back funding, not having the money that we can pay these officers that they deserve because these officers go through a lot. They go through Thole training. They spend three thousand dollars to get their certification through the Texas Commission on law enforcement, and now you’re talking about cutting their funding back, so they can’t support their families,” Huling said.

Hunter said he will never doubt the fact that he doesn’t want to defund the police.

“We hold them to the highest regard, and public safety is number one in the city of Wichita Falls,” Santellana said. “One of the tax increases we had was in fire and police, and I got zero emails, zero complaints from the citizens because they knew that they were going to have to reach a little bit deeper in their pockets in order to protect the city. It’s a simple, simple subject for us.”