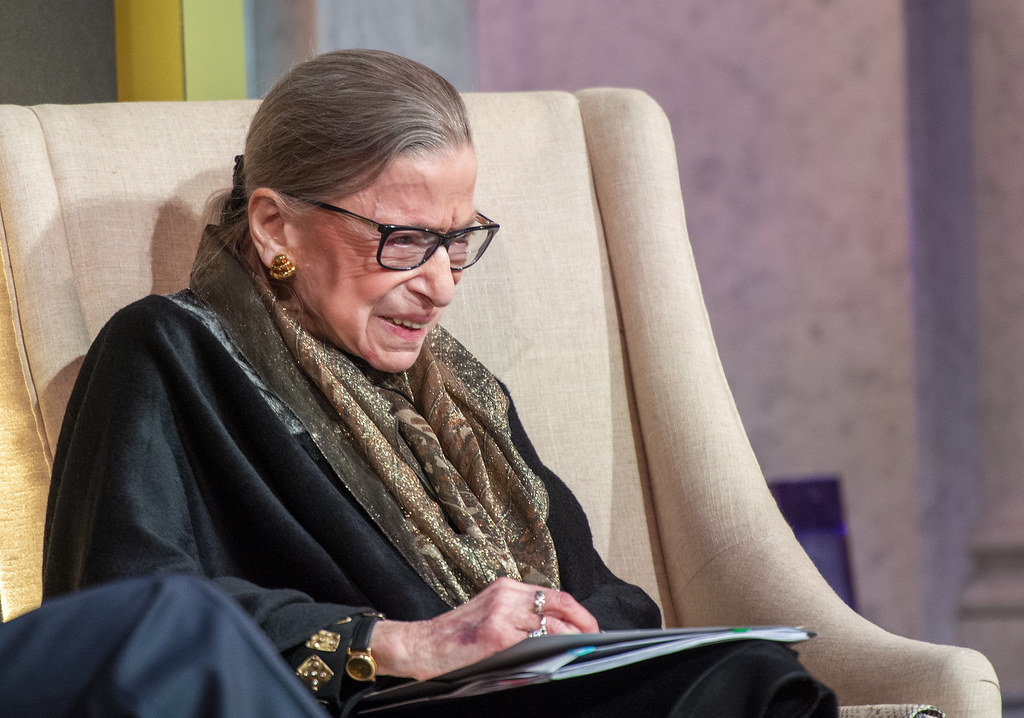 On September 18, 2020, Supreme Court Justice Ruth Bader Ginsburg passed away due to complications with pancreatic cancer at the age of 87.

Ginsburg was interred next to her husband at the Arlington National Cemetery and is the first woman and first Jewish person to lie in state at the United States Capitol.

The nickname Notorious RBG came from a Tumblr post made by NYU Law Student Shana Knizhnik in 2013. She explained that it was the juxtaposition of Ginsburg’s small stature and powerful presence that inspired her to create the nickname influenced by Notorious B.I.G.

Ruth Bader Ginsburg was influential in the fight for women’s equality. Furthermore, her shadow remains in American everyday life because of her work from the past.

Ginsburg was born in Brooklyn, New York on March 15, 1933. She then attended Cornell University, where she graduated as the highest-ranking female student from her class on June 23, 1954.

During her time at Cornell, she met Martin D. Ginsburg, who she married a month after graduating. They had a daughter, Jane, in 1955 and a son, James, in 1965. Shortly after the birth of their daughter, Ginsburg’s husband was diagnosed with testicular cancer. In 2010, he died from complications of metastatic cancer.

While working at the Social Security Administration in Lawton, Oklahoma, she was demoted after her workplace was notified she was pregnant.

While enrolled at Harvard Law, the dean invited all nine of the school’s female students to dinner, where he reportedly asked them, “Why are you here, taking the place of a man?” Both Ginsburg and her husband were students at Harvard, and while he was receiving treatment for his first diagnosis of cancer, Ginsburg attended class, made notes and dictated papers for both of them. She made the Harvard Law Review.

After transferring to and graduating from Columbia Law, where she became the first woman in two major law reviews and tied for first in her class ranking, she applied as a law clerk with Supreme Court Justice Felix Frankfurter but was rejected because she was a woman and a mother.

In 1963, Ginsburg became a professor at Rutgers Law School and was one of the twenty female law professors in the country. She was paid less than the average male professors, because she had a husband that was also making income.

Ginsburg was not deterred by the discrimination she faced, instead it fed her drive to fight against it by proving to society that women could be just as successful as men.

In 1970, she co-founded the Women’s Rights Law Reporter, the first law journal that solely focused on the rights of women. From 1972 to 1980, she was the first tenured woman and co-authored the first law school casebook on sex-based discrimination.

Before joining the Supreme Court, Ginsburg co-founded the Women’s Rights Project at the American Civil Liberties Union in 1972. She became the general counsel in 1973 and stayed as the director until she was appointed to the Federal Bench in 1980. During this time, she argued and won five gender discrimination cases before the Supreme Court.

On April 14, 1980, Ginsburg was nominated to the U.S. Court of Appeals for D.C. by President Jimmy Carter. She was confirmed on June 18, 1980, and served until she was appointed to the Supreme Court in 1993 by President Bill Clinton.

Ginsburg made sure her voice didn’t waver in her position on the Supreme Court.

She authored the court’s opinion in “United States v. Virginia,”a case that removed Virginia Military Institute’s male-only admission policy. Ginsburg’s writings said VMI did not include “exceedingly persuasive justification” for the policy and that it violated the Equal Protection Clause.

“Bush v. Gore” was the Supreme Court’s ruling to settle a dispute over recounts of Florida’s 2000 presidential election. The ruling led to Bush winning the electoral votes of Floria. Ginsburg was one of the five justices that dissented, arguing that preventing a recount would cloud the legitimacy of the election.

She was inducted into the National Women’s Hall of Fame in 2002, was named one of the 100 Most Powerful Women in 2009, was one of Time’s 100 Most Influential People in 2015 and was the recipient of the Berggruen Prize for Philosophy and Culture in 2019.

In 2020, Ginsburg received the LBJ Foundation’s Liberty and Justice for All Award, the World Peace and Liberty Award, a lifetime achievement award from the Diane von Furstenberg foundation, and the 2020 Liberty Medal.

Ginsburg was diagnosed with colon cancer in 1999. While receiving chemotherapy and radiation therapy, she never missed a day on the bench. In 2009, she had surgery for pancreatic cancer and returned to the bench when the Supreme Court went back into session that same month. After being hospitalized in 2018 when she fell and fractured three ribs, a CT scan revealed cancer in her lungs. Over the summer of 2019, Ginsburg completed focused radiation treatment for a pancreatic tumor. In Feb. 2020, her cancer returned, and by May, she started receiving treatment again.

Ginsburg passed away the night before Rosh Hashana. According to Rabbi Richard Jacobs, “One of the themes of Rosh Hashanah suggests that very righteous people would die at the very end of the year because they were needed until the very end.”

While Ginsburg will be remembered for her work on the Supreme Court and fight for equality, she said she would like to be remembered, “as someone who used whatever talent she had to do her work to the very best of her ability.

Students around MSU were asked to share words on Ginsburg’s tasing as well as the legacy she left behind.

“Her belief and fight against gender discrimination has led to inspire many females to stand up for their beliefs. She’s not the first female to fight against the subject, but she definitely made sure that her voice was never buried, and i respect that from her,” Dominic Chavez, theatre sophomore, said.

“I believe that one of the defining features of Ruth was that she not only fought for the rights of women and the LGBT community, but taught others why she believed what she did. She helped put laws in place and in the process made people change their own views on these subjects. I feel like that is something that is so lost in government now, teaching,” Scobee said.

“I think that RBG had an incredible impact for shifting the country and the Supreme Court towards being more progressive and inclusive,” Revis said. “What I will remember most about RBG is the fact that in the face of injustice she had the ability to remain resilient.”

“RBG has personally given us a better life knowing we can get any job, although we are women,” Caldwell said.“RBG paved the path for women in law, regardless of political or judicial ideals and identities.”

Travis Christoff, global studies freshman, remembered Ginsburg as a “lioness” in all aspects of her life.

“I will remember most about RBG that she is a lioness of the law and never backed down from a fight, whether that be fighting cancer for years or protecting rights in the Supreme Court,” Christoff said.

Despite not knowing much about her, Janae Sanchez, radiology junior, said she knew of the importance of Ginsburg’s legacy.

“I don’t know much about her, but I know that her work has impacted my life greatly because she gave me opportunities she never had,” Sanchez said.