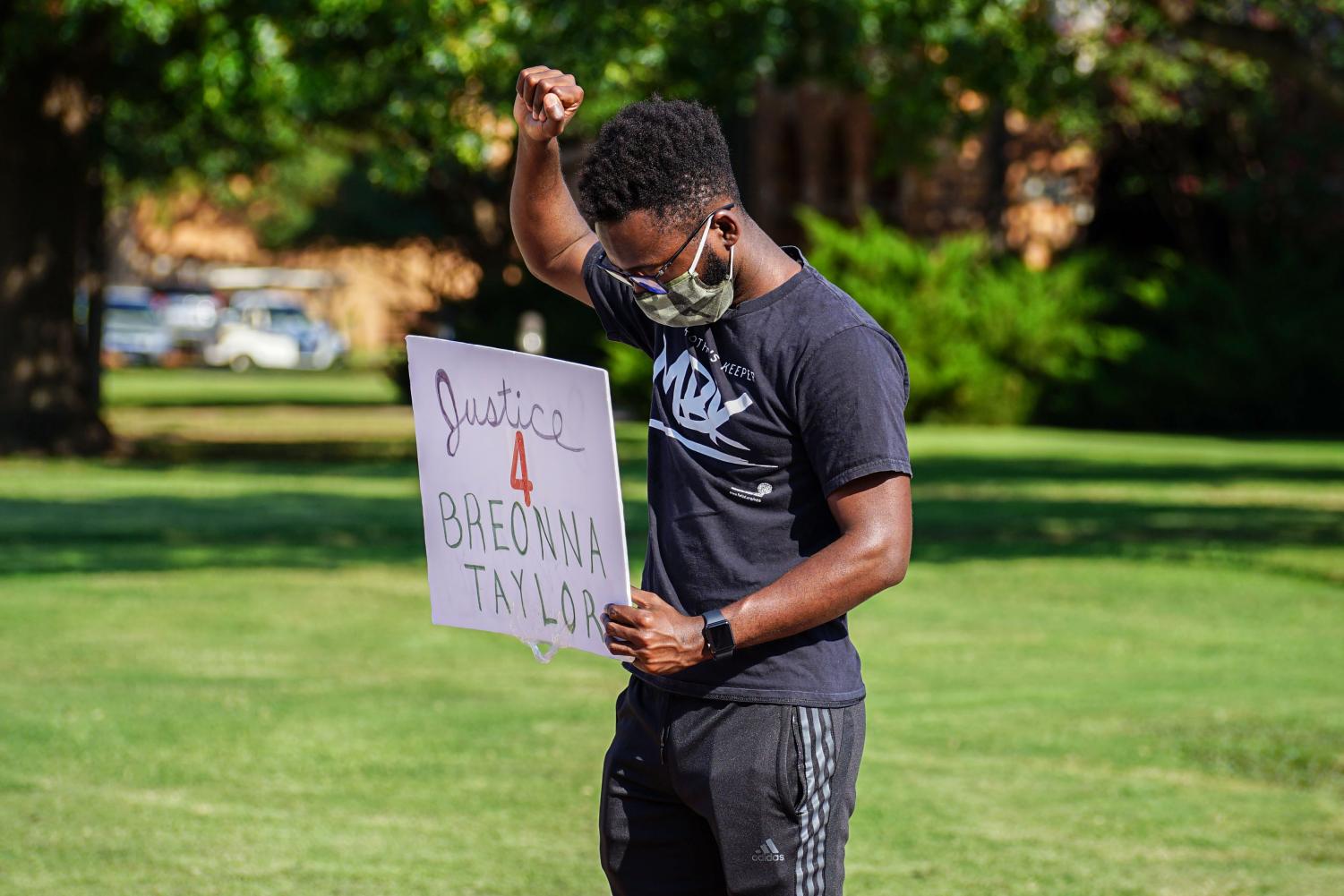 An MSU Texas student holds up a fist during a minute of silence at the Amnesty International hosted rally for Breonna Tayor. (Bridget Reilly)

An MSU Texas student holds up a fist during a minute of silence at the Amnesty International hosted rally for Breonna Tayor.

Commemoration of Breonna Taylor's life as well as the countless other lives lost to injustice.

Breonna Taylor, 26-year-old EMT, was in her home with her boyfriend, Kenneth Walker, when officers, Jonathan Mattingly, Brett Hankison, and Myles Cosgrove, in what has been described as a “botched raid”, entered and fired multiple times which resulted in the death of Taylor.

The Louisville police entered the apartment in search of two men who they believe were selling drugs. During this time Taylor and Walker had been in bed but got up when they heard the banging on the door. When the officers entered Walker fired thinking it was an intruder which resulted in one of the officers, Mattingly, being shot in the thigh. The officers responded by firing several times with Taylor being struck multiple times which caused her death.

On May 23, the FBI announced that they had opened an inquiry in Taylor’s death. It was June 23 when Hankinson, who “blindly fired” 10 shots, was terminated from the Louisville Metro Police Department and June 11 when the city banned no-knock warrants but none of the officers had been charged or arrested. It was not until September 23, over six months after Taylor’s death, that a grand jury announced three wanton endangerment charges against Hankinson who pleaded not guilty. The other officers involved, Mattingly and Cosgrove, will not face any charges.

Since the death of Taylor, there has been a cry for justice nationwide. Taylor is only one of the many lives taken at the hands of police brutality, which caused protests in cities across the nation as part of the Black Lives Matter movement. The verdict of Taylor’s case only fueled for the protest to continue and MSU was no exception. On September 24, 2020, Amnesty International held a rally to commemorate Taylor’s life and the countless lives lost to injustice.

“It [is important to hold the rally] to commemorate Breonna Taylor, to honor her and her family and just come together in solidarity with Breona Taylor, with Black Lives Matter to all those lost to injustice,” Amelia Wright, Amnesty International president, and sociology senior, said.

Not only was this rally to commemorate the life of Breonna Taylor but a call to action. Wright states that Amnesty is demanding new laws to be put in place to prevent other unlawful deaths.

“The Kentucky attorney general, Daniel Cameron, chose not to seek justice for Breonna Taylor. This is why it matters immensely that these laws are changed. This is why Amnesty is so demanding that the Peace Act and the Justice and Policing Act, which are acts that both seek to create accountability for the unlawful killing of black people, be advanced by Congress, and why we are so demanding that our representatives support passing these acts. We want to ensure that states have to choose justice so that law reflecting justice becomes a reality. The world is watching is kind of Amnesty’s motto, so here even at MSU Texas in Wichita Falls, the world is watching.”

With the world watching, Wright opened the floor for others to say a few words. Ryan Kelly, political science and mass communication junior, stepped up to the mic and shared the story of his mother.

“Obviously I’m not a black woman; I can’t speak in the shoes of a black woman, but I also was born by a black mother. When she was having me and they thought I wasn’t going to make it, the doctor said, ‘You probably can’t take care of him anyway.’ I can only imagine when her professors said, ‘Oh you’ll never make it through school with that kid.’ I can only imagine what [black women] go through on a daily basis, and I’m speaking to all these beautiful queens out there that have to walk the streets and feel like they’re not protected by anyone,”

Kelly acknowledged the difficulties that black women have to go through daily. As students talked at the rally they shared their story pertaining to the Black Lives Matter movement.

“The Black woman is the most unprotected person in the world, and it’s more than frustrating to continue to see the execution of unarmed Black people. For it to then be justified by our justice system is only more of a slap in the face. The lives of Black people are not political, it’s not a political issue, it’s a human issue, a person issue, a people issue. I was just going to say go vote, educate yourselves,” Zion Jones, coordinator of the Men of Color Alliance, said.

Jones ends his speech with a call to action, motivating others to vote and learn more about the issue. The lack of information on the issue has left students frustrated.

“For the ignorant people, teach yourselves, educate yourselves. There’s enough information, just type it up on google, you will see. If you’re ignorant you are choosing to be ignorant, it’s a choice,” Gloria Olagoke, nursing junior, said.

There is an emphasis for the public to educate themselves on the Black Lives Matter movement and understand the true meaning behind it.

“They act as if this is a hate group…They’re acting as if we’re trying to take over but really [we are] asking to be equal [to] have equality,” Kailin Martin psychology junior said. “My mom, she was born in the ’60s during [the] Jim Crow [laws], my grandma clearly was around during segregation [and] for me to be the third direct generation to still go through that, it’s just really mind-blowing and at a loss of words of what I should actually say because it’s like why? I’m angry but it’s just kind of like how? why is this still going on?”

The racial discrimination that has always been present in the U.S. has angered students both from and out of the U.S.

“I grew up not knowing there’s racism, when I came to America that’s how I knew there was racism…Africa does not have racism, racism is what’s killing people in America right now,” Aline Masengesho, political science, and global studies junior, said. “Africa might be going through some economic issues but let me tell you there’s love in Africa there’s so much love, we have love for each other…why can’t we love each other here in America.”

Masengesho wants love to be spread throughout the U.S. as a way to put an end to racism. She also stated the need for protesting and taking a stand against the injustices that Black people face.

“We all have a part to play and I think the best thing we can do right now is acknowledge the original sin of America and that is racism, something that…built our nation up, and I felt like now is the time that we can really make a change and do things we never thought we could have done generations before,” Kelly said.

Kelly calls on others to come together and create a change. As the rally came to an end Wright also encourages those attending to not be silent and make their voices heard.

“Stand up have your voice be heard, may that be activism on social media, activism like [this rally] you know physically coming out maybe protesting, which is your right to do, just do all you can educate yourself there’s no point in just staying ignorant just staying silent on things when you know that your voice can make a difference.”