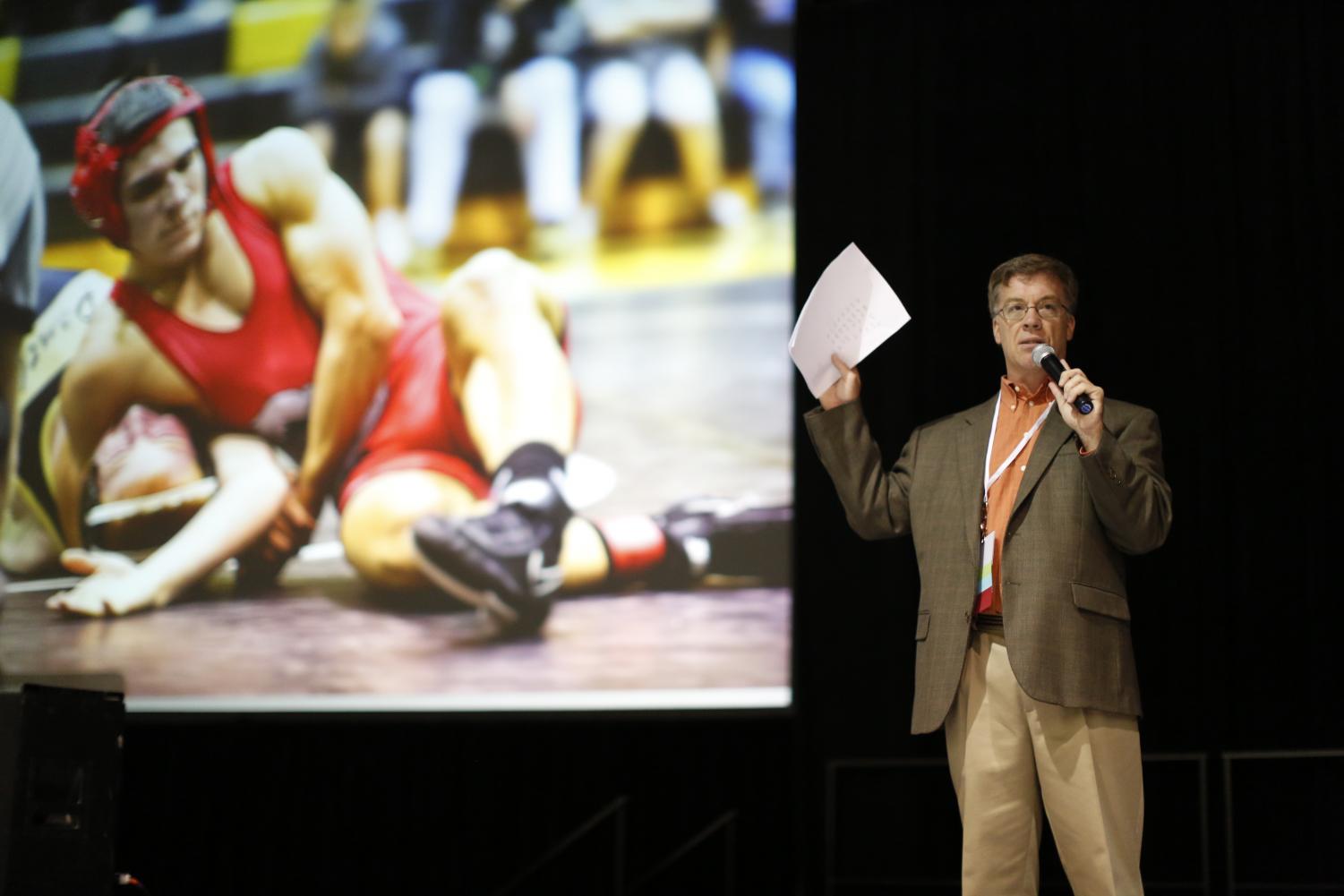 Bradley Wilson honored as 2020 David Adams Educator of the Year

After graduating from college in 1989, Bradley Wilson, associate professor of mass communication, was at a crossroads.  Freshly graduated Wilson had to choose between six different job offers that revolved around newspaper and education. The first job he was offered was as a managing editor; although he was honored and elated to be considered for a leadership position, he knew his worth after spending six years in higher education and obtaining two degrees. After being offered a starting salary of $14,000, he laughed and never looked back. 31 years later as an educator, Wilson is being honored as the 2020 David Adams Educator of the Year.

Despite being uncertain of where his degrees and experience would take him, Wilson is appreciative of this recognition especially because it’s from his peers.

“The coolest part was looking at the list of people who have won the award in the past and saying, ‘Wow those are people I really respect,’” Wilson said. “Those are people I turn to for ideas and thoughts. They truly are leaders in both scholastic journalism and higher education. I’m honored to be included in that group.”

Wilson has always loved learning and he strongly believes that fully submerging himself in the course material has stimulated continuous learning that keeps him fascinated and inspiring to his students.

“I love learning and passing that on to people,” Wilson said. “I really do believe that learning never stops. It doesn’t matter what level of class it is or how many times you’ve taught the class, there is always something else to learn.”

Though Wilson is well-rounded and knowledgeable about the media industry, he acknowledges that being an educator in higher education takes a lot more than just knowledge.

“I think there is a theatrical component to teaching,” Wilson said. “If [a student] is going to stare at me for 90 minutes, I better be entertaining. Also, I think you have to know your stuff, because I can’t imagine standing in front of a group of students and not being intimately familiar with the material. It’s not only what you teach but how you teach it, and that’s not easy.”

Wilson reveals that being an educator in a field that is constantly changing comes with its own challenges.

“We’re teaching students to go to work in a world, and we don’t know what that world is going to look like,” Wilson said. “But that’s also the cool part about it; the media industry is changing so fast that you have to be in front of it. You can’t teach the same lesson that you’ve taught three years ago, it has to be new and different.”

Dedicated to fresh and new ways to teach, Wilson has found it challenging to implement innovative techniques to educate and inspire students in the midst of a pandemic.

“I’ve had to lower my standards just because of the situation, not quality standards but quantity standards. We just can’t do as much because there are too many restrictions,” Wilson said. “I’ve had to pull back a little bit and realize that this is the world we live in, and I’m not sure how fair it is to the students, but it’s not like we have control over the situation.”

Although the pandemic has altered the standard ways of teaching, Wilson still strives to be the best educator he can be whether it be through zoom or face-to-face instruction.

“We’ve had to learn new ways to teach, and I’ve had to be a lot more prepared to walk into the classroom,” Wilson said.

Wilson lives and breathes for educating as he devotes his time to making sure every single student he comes across knows how to improve and better appreciate the craft they’re practicing. As he continues to break through students’ lives on both a scholastic and higher education level, Wilson strives to leave a legacy of knowledge that reaches beyond the surface.

“I’d like to be known as a person who knew his stuff and how to teach it,” said Wilson. “One of the really cool things about this award was the number of people that I’ve heard from. I’ve heard from hundreds of students that I’ve taught from 15 to 20 years ago and it is awesome hearing from those students and seeing the small impact I’ve made on them.”

Bradley Wilson honored as 2020 David Adams Educator of the Year