Since the NCAA shut down the remaining spring sports seasons, athletes from eight different winter and spring sports have hung up their Mustangs uniforms for the year. While we mourn for the senior ‘Stangs whose last seasons were cut short, we celebrate their accomplishments and look hopefully to the underclassmen to bounce back next year stronger than ever.

The softball team finished the shortened season with a 7-5 win over #2 University of Tyler, but finished with a 3-19 record, including 1-5 in conference play.

Lauren Lindgren (No. 6), outfielder and special education senior, led the team in hits with 28, RBI’s with 16 and was second on the team with a batting percentage of .394. She also hit the game winning home run in the final game of the season. Bailey Brenek (No. 16), utility player and education freshman, served as the team’s cleanup hitter and led the team in home runs with four on a team-high .621 slugging percentage.

Jacey Henry (No. 22), pitcher and elementary education junior, served as the team’s ace and posted a 1-8 record in 58 innings pitched. Her 6.52 earned runs average, 1.97 walks and hits per inning pitched, 32 strikeouts and 30 walks were all best on the team.

There were 26 games remaining on the schedule, not counting postseason, when the NCAA cancelled the spring athletic season due to COVID-19 concerns. Lindgren, Jessica Clark (No. 8), utility player and economics senior, and Kelsey Eropkin (No. 15), outfielder and psychology senior, all had their final game in a Mustangs uniform come early. 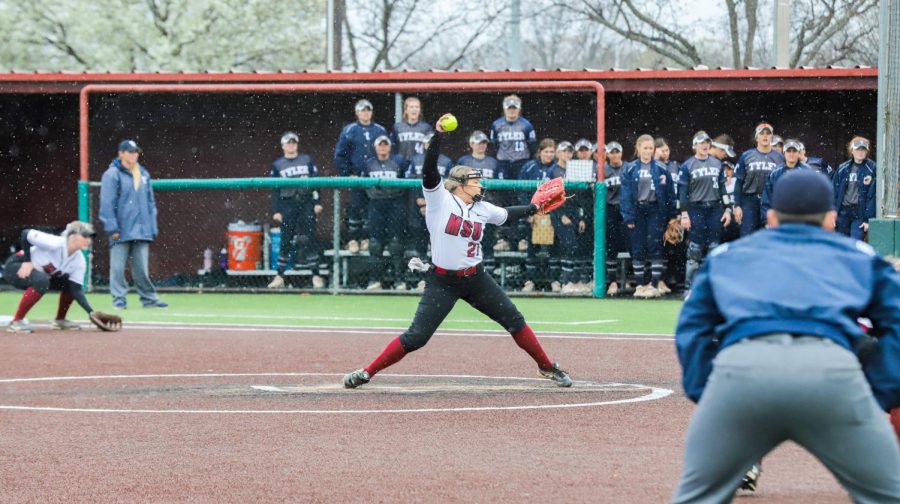 Ashley Ramirez, marketing senior, Emilija Segetlija, finance senior, and Emilija Visic, pre-med freshman, each had nine singles victories for a team that went 51-20 in singles matches. The team was 25-11 in doubles matches, bolstered by the strong tandem of Casie Curry, kinesiology sophomore, and Lea Cizeron, global studies senior. Curry and Cizeron posted a 9-2 record and were on a five game winning streak to close the season.

Ramirez, Segetlija, Cizeron and Juliette Mary, undecided senior, each had their final season as a member of the tennis team cut short. They were scheduled to face 14 more opponents before the postseason. 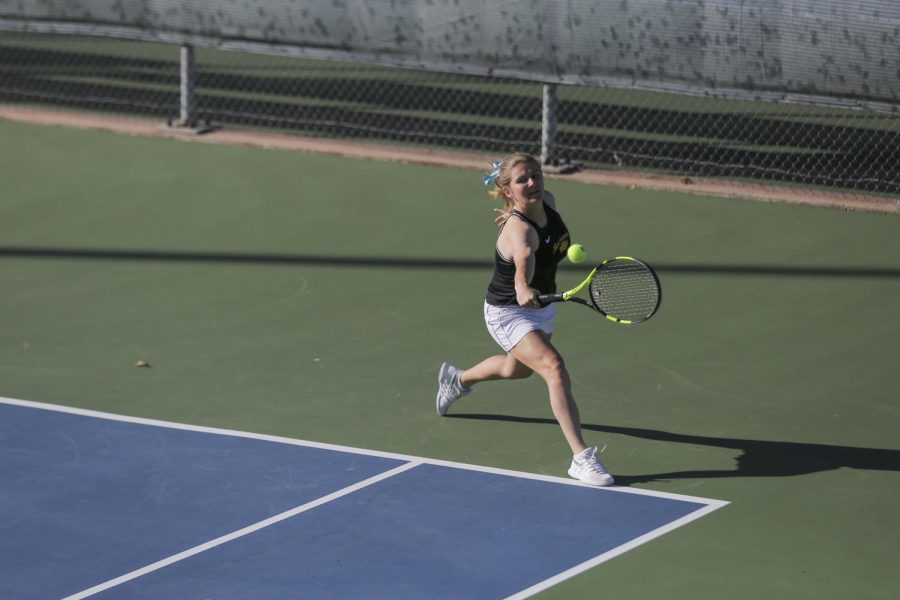 The men’s tennis team bounced back from a five-game losing streak to win the final four games of the shortened season and finish with a record of 8-7.

Angel Palacios, business management senior, was the lone senior on the team that had his last season cut short. He finished his lat season 7-5 in singles matches and 10-4 in doubles matches. 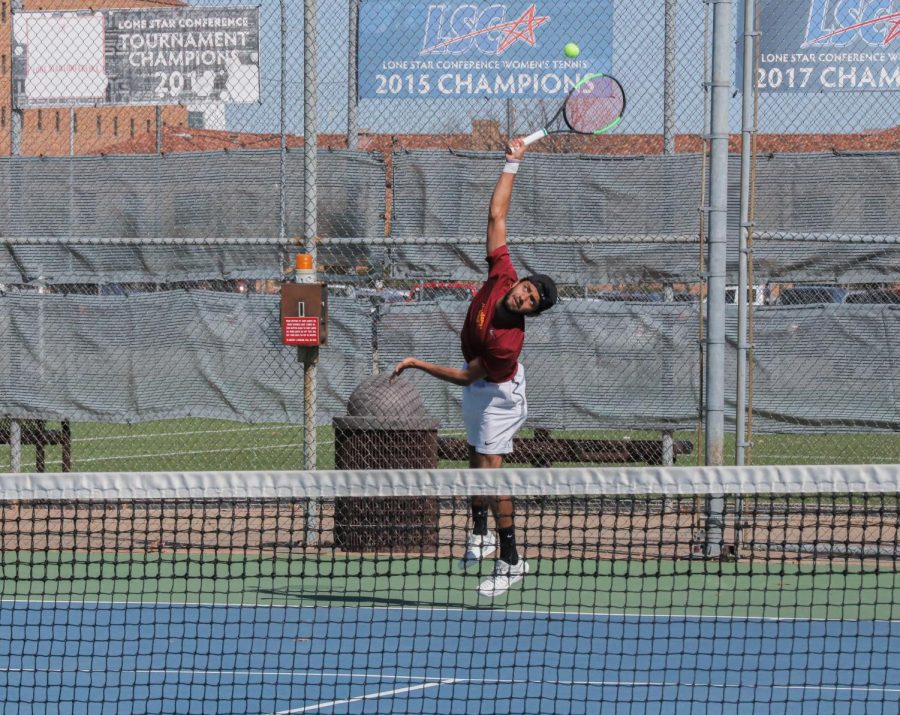 The women on the track team were able to finish out their indoor track season, finishing 8th in the Lone Star Conference Indoor Championship.

The track team was scheduled to compete in the Wes Kittley Invitational in Abilene, Tx March 19 through March 21 before the Lone Star Conference suspended further contests. The Mustangs had five seniors who were unable to compete in their final collegiate outdoor track season. 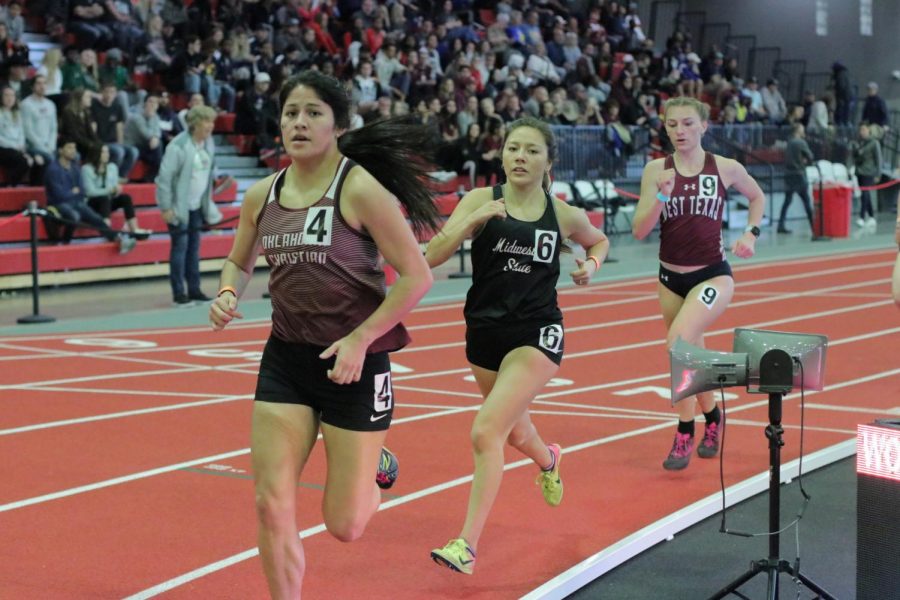 The men’s golf team was able to finish two spring invitationals in the spring golf season, finishing 5th in the Jack Brown Invitational and 8th in the St. Mary’s Invitational.

Garrett Leek, 2019’s freshman of the year and undecided sophomore, had a strong campaign including his first career ace at the St. Edwards Fall Semester. Tyler Kenyon, economic freshman, was a first-year standout for the Mustangs and recorded the third lowest average score on the team.

Former Lone Star Conference player of the year Jake Doggett, management junior, continued to cement his place among the great golfers in school history as he recorded a top-10 finish in five of the seven competitions. Doggett posted the lowest season scoring average in Mustangs history (minimum of 12 rounds) with an average score of 71.20, and his 93.3% finishing percentage tied for first all-time.

All members of the men’s golf team will have another chance next year to finish out a complete season.

The women’s golf team had a strong season, finishing fifth or higher in all of their competitions, including a first place showing Fort Lewis Skyhawk Intercollegiate contest.

Anna Kittelson, undecided sophomore, played part of her final season for the Mustangs before accepting a Division I offer to golf for the University of Delaware. She golfed nine rounds for the Mustangs this season and finished with a team-best average score of 73.6. Megan Brown, business management freshman, made a name for herself with a 71.7% finishing percentage, and she finished under par or better twice.

Juanita Gomez, junior, finished the season second in average score and recorded the Mustangs’ sole individual win at the Fort Lewis Intercollegiate. She also recorded the lowest all-time average score (minimum 12 rounds) for a season with a score of 74.80.

Lexi Read, marketing senior, had her final season as a Mustang cut short due to the NCAA’s cancellation of spring sports.

In an emotional season in which head coach Noel Johnson had to step away to battle ovarian cancer, the women’s team went 11-16 overall and 8-7 at home in the Dome. One highlight of the season was the Mustangs’ 84-77 second-half comeback over Cameron University in the first Red River Rivalry game.

Mica Schneider (No. 4), guard and business finance senior, came on strong in the last half of the season and averaged a team-high 12.6 points-per-game and 3.7 assists-per-game to go along with her 53 3-pointers. Hannah Reynolds (No. 11), forward and health science junior, lead the defensive effort in the paint, averaging a team-best 1.4 blocks-per-game. A freshman standout on the team was Mandy Withey (No. 23), forward and elementary education freshman, who put up 3.1 points-per-game, three rebounds-per-game and .6 blocks-per-game in just under nine minutes-per-game.

A couple of Mustangs moved up the career records books this season. Schneider’s career 105 3-pointers made ranks 13th and her 256 attempts ranks 11th. Reynolds continued to set the blocks leaderboard on fire, finishing the season within five blocks of becoming the new career blocks leader. She also had her third season in which she finished in the top-15 for blocks-per-game in a season. Elizabeth Cathcart (No. 43), forward and marketing senior, finished her career ninth in blocks-per-game with .4, tied for 14th in offensive rebounds-per-game with 1.5 and 12th in free throw percentage with .725%. 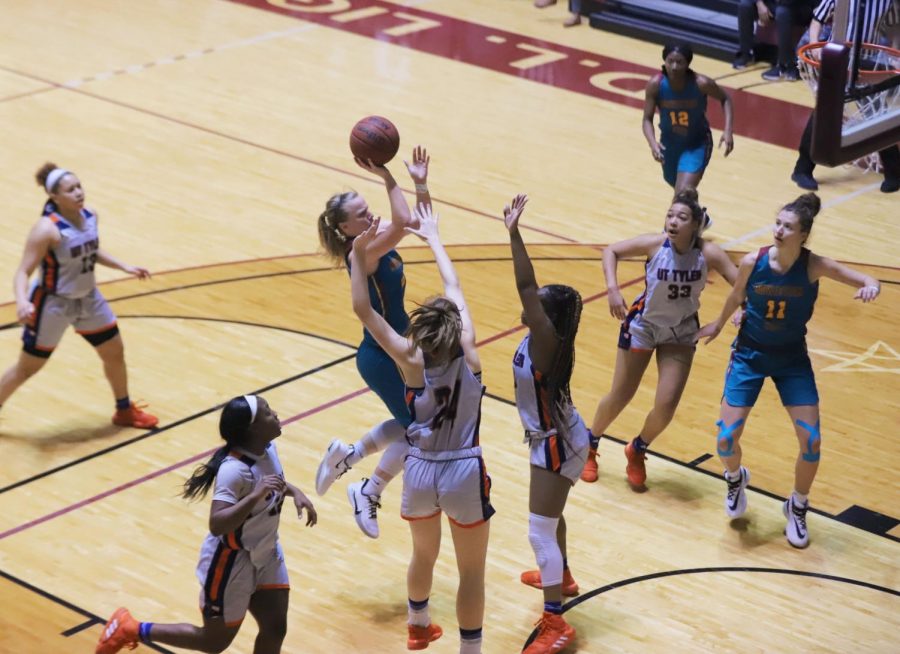 After starting the season 4-19, the men’s team finished the season strong, going 4-1 in their last five regular season games and earning a spot in the Lone Star Conference Tournament. The highlight of the ‘Stangs’ season was the 69-68 victory over West Texas A&M which secured them the postseason spot.

D’monta Harris (No. 13), guard and applied arts and sciences senior, lead the team on the offensive side, averaging a team-leading 16.1 points-per-game, six rebounds-per-game and 78 made 3-pointers. Along with averaging 14.2 points-per-game of his own, Darius Thompson (No. 3), guard and mass communication senior, recorded team-high totals of 29 steals and 20 blocks on the defensive side of the ball. Evan McCarthy (No. 23), guard and undecided freshman, was a standout newcomer for the team, averaging six points-per-game in just under 17 minutes-per-game.

In its first season under the leadership of head coach Justin Leslie, the team changed its offensive style to be more aggressive from beyond the 3-point line. The Mustangs shot 159 more 3-pointers than the year before despite taking less shots overall. Harris headlined the 3-point revolution by making the 13th most 3-pointers in a season and attempting the sixth most 3-pointers in a season in Mustangs history. Trae Jones (No. 2), guard and business sophomore, now stands at 15th in 3-pointers attempted with 301. He has made .332 of those shots.

Due to their impressive seasons, Harris was selected to the All-Conference Third Team, and Thompson was selected as an honorable mention. 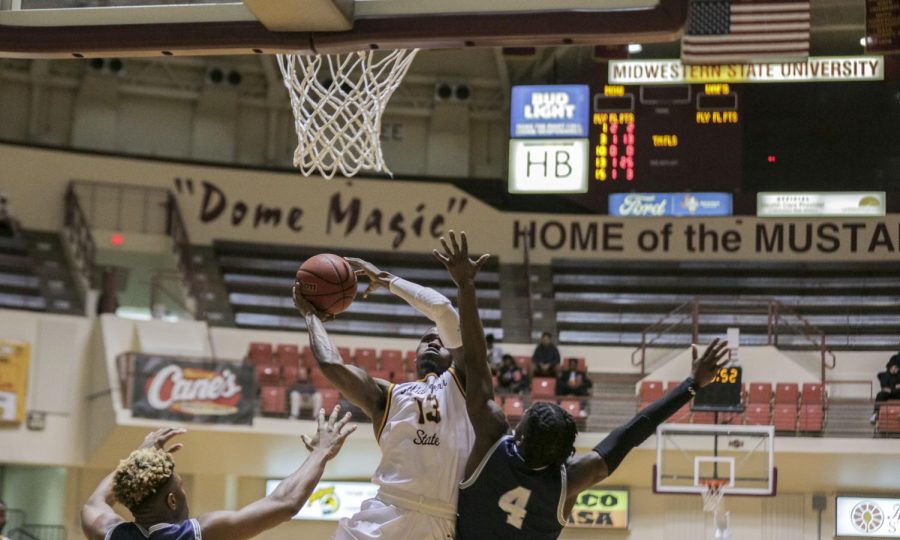