The men’s tennis team players perform a pregame group chant to hype themselves up. March 5.

Combining both women’s and men’s total scores, MSU Tennis went a combined 46-10 between March 5 and March 7 and lost to only one opponent overall. Each team faced four universities and went 23-5 in that time span.

“They did a good job. We won seven out of eight matches on the homestand. The match we lost we were right in position to win. Ladies were right there, so they finished really strong. They won the last two matches at home, which is great,” Scott Linn, head men’s and women’s tennis coach, said.

“I think we started doubles off really strong; that’s like the biggest thing for us. Build momentum with that one point. Then moving into singles, we knew it was going to be a really tough match. It was big for us to win two sets of the match and from there it’s to be continued,” Ramirez said. 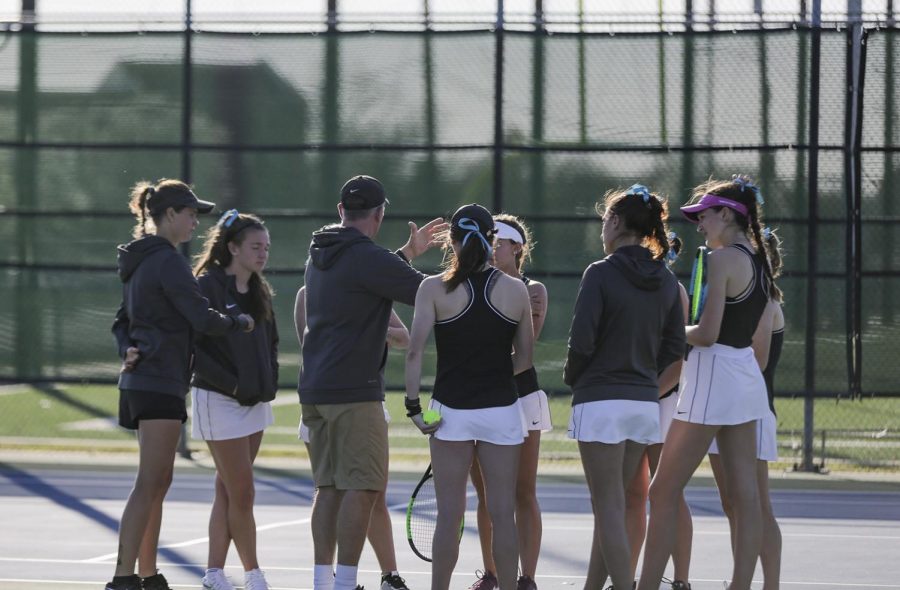 “Today we had a great day for doubles and singles. We came out strong and won our first 3 matches, to clinch the match 4-0. A true turning point for our program. We had a tough start of the year, but now I think this match will give us momentum going forward,” Westwick said. 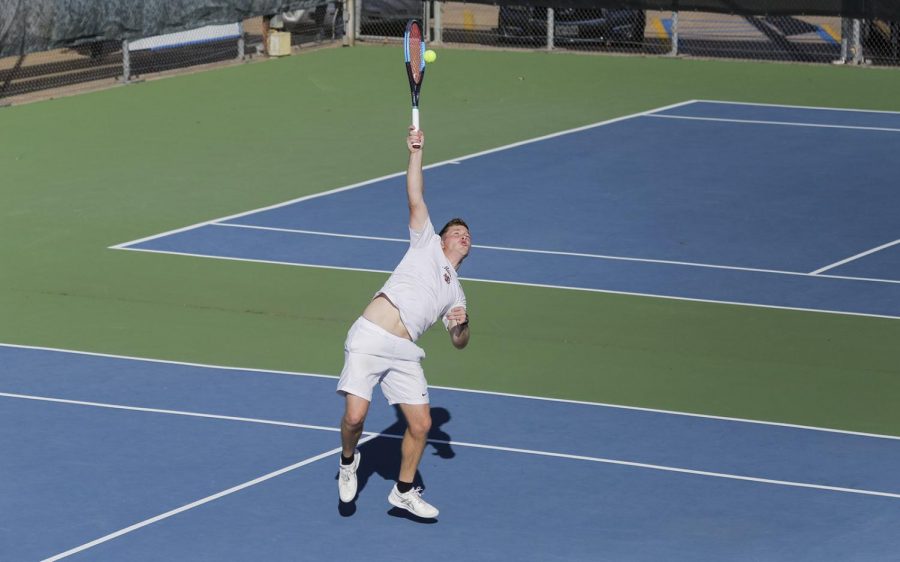 The team preformed a perfect sweep, winning all nine events, including all three doubles matches. Juliette Mary, undecided senior, won her singles match with set scores of 6-0 and 6-2 and won her doubles match with Emilija Visic, pre-med freshman, 7-5.

”I felt good about today, we competed into the last point even if it was hard. We were in a lot of stress at the beginning, so we are going to try to relax this afternoon. We are going to start competing as hard as we can and find a way to win,” Mary said.

The Mustangs posted a perfect record against CMU, winning all doubles and singles matches. Palacios was one ‘Stang who won both his matches. He won 6-2 in his doubles Emilijgndjnmatch with Quentin Scharfenberg, mechanical engineering redshirt freshman, and won his singles with set scores of 6-2 and 6-4.

”Our doubles were pretty good overall. We had a lot of energy and that helped us play better as a team. In singles we did a really good job at stepping into the court and not taking it easy on anyone. Go after it and get us ready for our toughest match on Saturday. Our game plan for the next match is come out with energy in the doubles and in singles, be really strong at the baseline and go after people,” Palacios said. 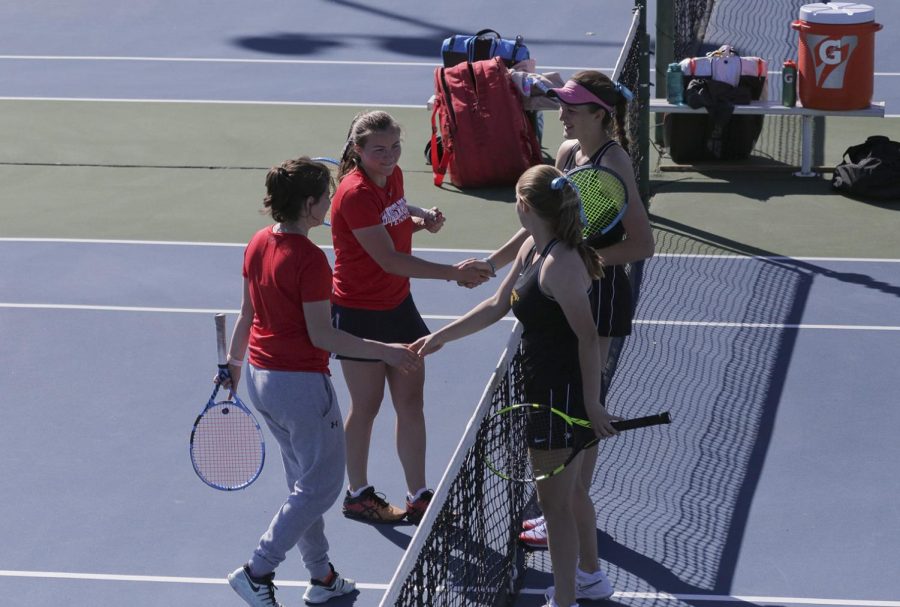 The women’s team defeated Colorado State-Pueblo 7-0 in the second set of matches Friday, March 6 at 3 p.m.

This victory moved the women’s team to 14-0 on the day. This was also their third straight doubles sweep. Ramirez and Gray won 6-0, Lea Cizeron, global studies senior, and Curry won 6-2 and Visic and Mary won 6-0. The closest match was Ramirez’ singles victory with set scores of 6-2 and 6-4.

”Today as a team, we had a lot of momentum going into the match with doubles. From the start we were together, even when we would have bad moment, we came back from that. Which was important to use going into singles. For tomorrow since it’s going to be a tougher match than today, we just have to use that same kind of mentality, where no matter what happens we all have to work together. We have to take one moment and one point at a time,” Visic said.

The men’s team defeated Colorado State-Pueblo 7-0  in the second set of matches Friday, March 6 at 3 p.m.

For the second time in one week, the men’s team swept their opponents. One of the doubles victories and one of the singles victories came by way of a “win by default” as their opponents didn’t have anyone to compete. Bradshaw continued his freshman dominance, beating Rafael Abreu 6-3 and 7-6 in singles and winning doubles 6-3 with Diaz. 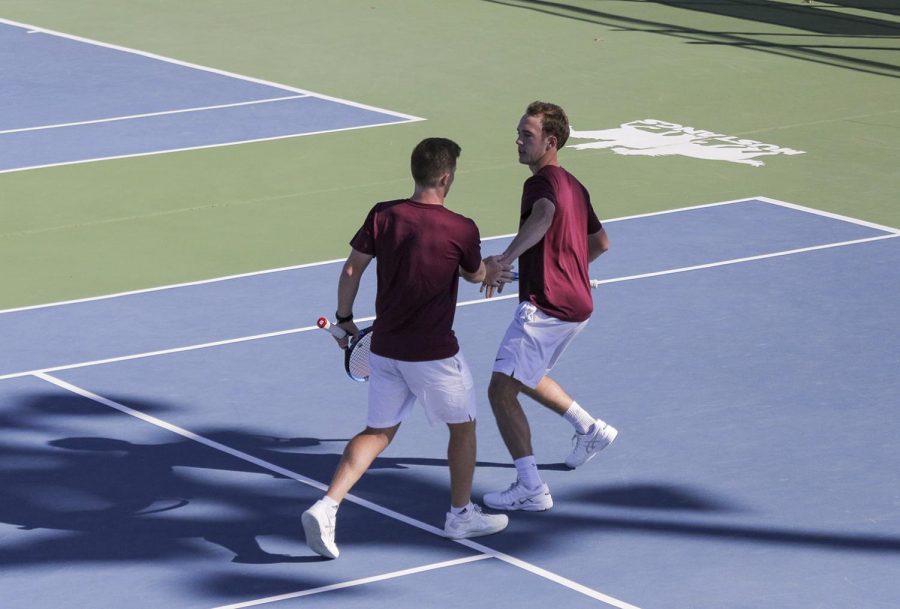 The women’s team suffered its lone loss of the recent home-stand, losing 4-3 to #19 Southwest Baptist University at home Saturday, March 7 at 3 p.m.

Ashley Ramirez, marketing senior, Visic, and Emilija Segetlija, finance senior, all won their singles matches, but SBU won the coveted doubles point by winning two of the three doubles matches. The lone doubles victory came from a 6-3 win by Cizeron and Curry. The duo of Ramirez and Gray, came back from a hefty deficit to even the score at 6-6 before falling 7-6.

“I think I did really well. I accomplished my goal of playing every ball and clearing my mind after every point. If a player can beat me when I do that, then they’re just better that day,” Ramirez said. 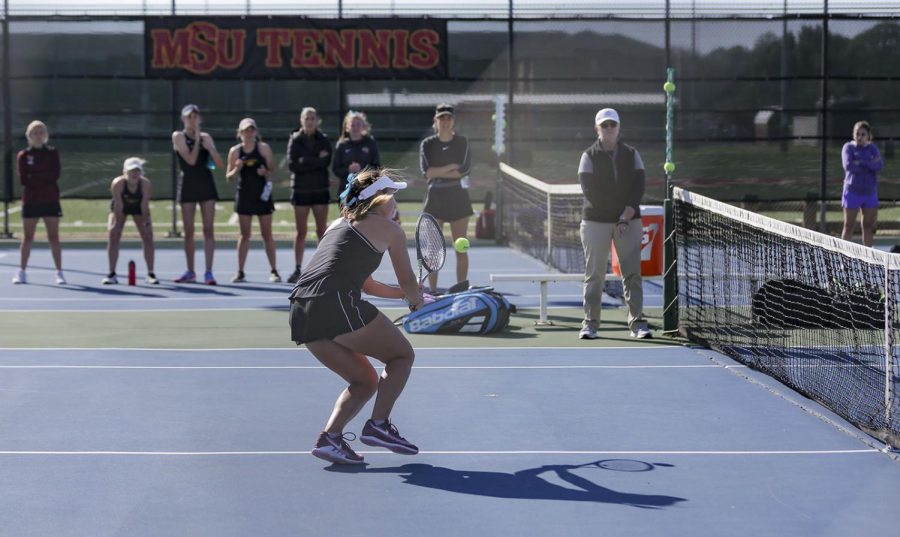 The men’s team faced their toughest competition of the home stretch, winning 4-3 against #13 Southwest Baptist University at home Saturday, March 7 at 3 p.m.

The tennis team won all three doubles matches to secure the doubles point, which proved to be the key to victory as the two sides tied in singles victories with three apiece. Bradshaw suffered his first official singles loss as a Mustang, but Roca, Diaz and Abhiram Venkatachalam, psychology sophomore, secured the Mustangs victory with singles wins.

“I feel like we’ve played really well as a team. Wins are coming to us more, because we are coming together more as a team,” Bradshaw said. 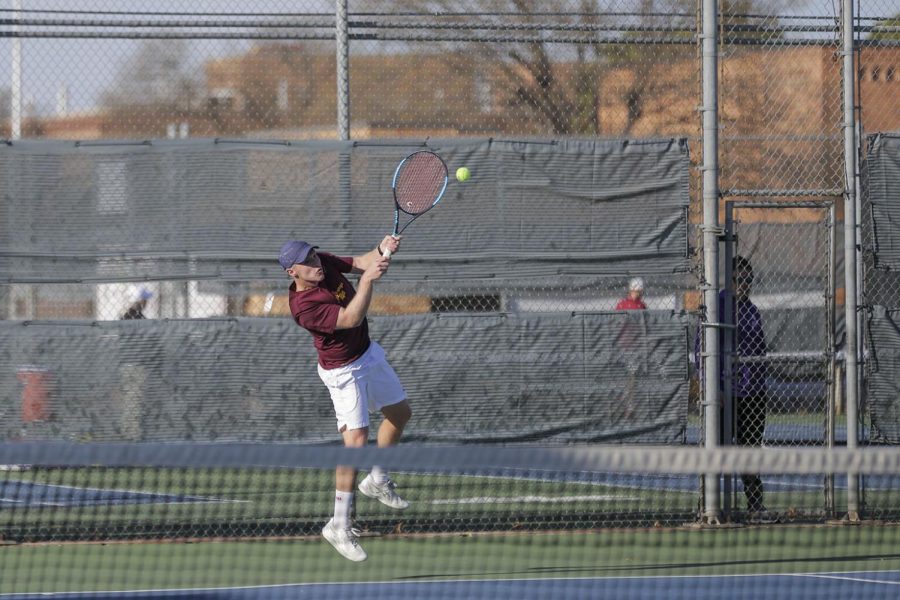 Gallery|8 Photos
Colin Stevenson
Junior Alberto Diaz jumps to return a volley with a two-handed back hand during his singles match. March 7.
Leave a Comment