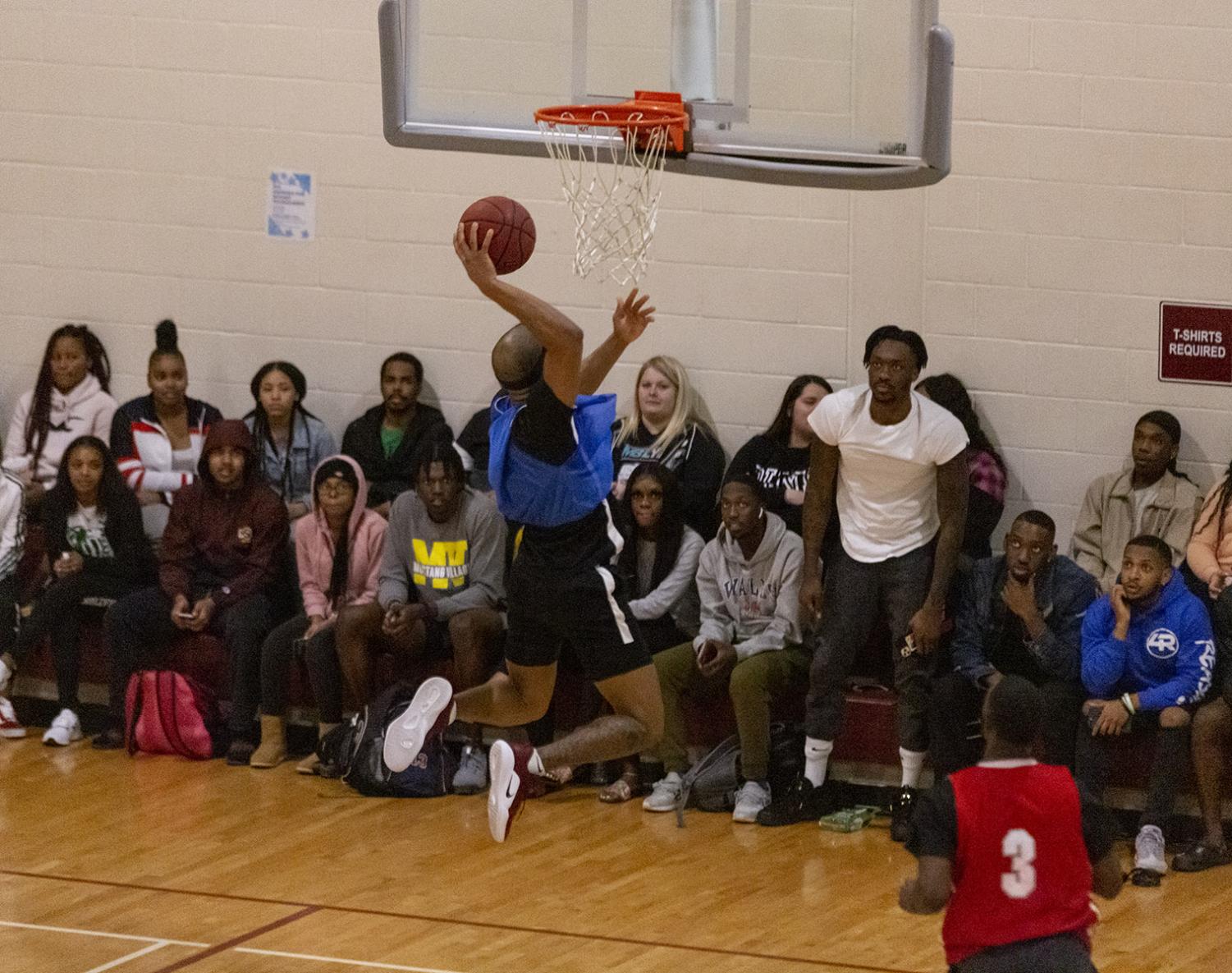 A member of team ‘The Royal Family’ dunks the ball while the crowd watches. March 5. Photo by Colin Stevenson.

Intramural basketball comes to an end

The men’s and co-ed intramural basketball leagues came to a close with two championship games on Thursday, March 5 at 9 and 10 p.m. at the Redwine Wellness Center.

In the men’s championship game, the 7-1 Royal Family faced the undefeated 8-0 SNG for an upset victory of 73-68. It was a very physical and foul filled game.

Alex Carter, marketing junior, played intramural basketball at his previous school and enjoyed getting to know people through the sport. He decided to give it a try here at MSU and wound up winning the championship in his first season.

While the score difference was never more than 10 at any point during the game, the Royal Family had a slower start in the first half than expected. Throughout the game, the team used different strategies to stay on track.

“Really just tried to keep our composure if things weren’t going our way and play as a team, because that’s what got us to the championship initially,” Carter explained.

Nicholas Caruthers, education sophomore, was also a member of the Royal Family. Despite being down at halftime, the team and him still brought it back together.

“At first I had a little doubt, but after halftime I knew it was our time,” Caruthers said.

The already competitive game became even more intense as the Royal Family began to take the lead. The fouls and trash talking increased as the free throw attempts piled up for both teams.

Nicholas Alexander, special education sophomore, attended the game in support of the Royal Family after his own team was previously eliminated in the playoffs.

“It’s a championship game so I knew it was going to be fun and intense,” Alexander said.

Eventually the buzzer sounded and the Royal Family won the championship. There were no hard feelings between the teams.

“I would say they shouldn’t continue to walk with their heads down. They were a good team and the game could’ve went either way,” Carter said. 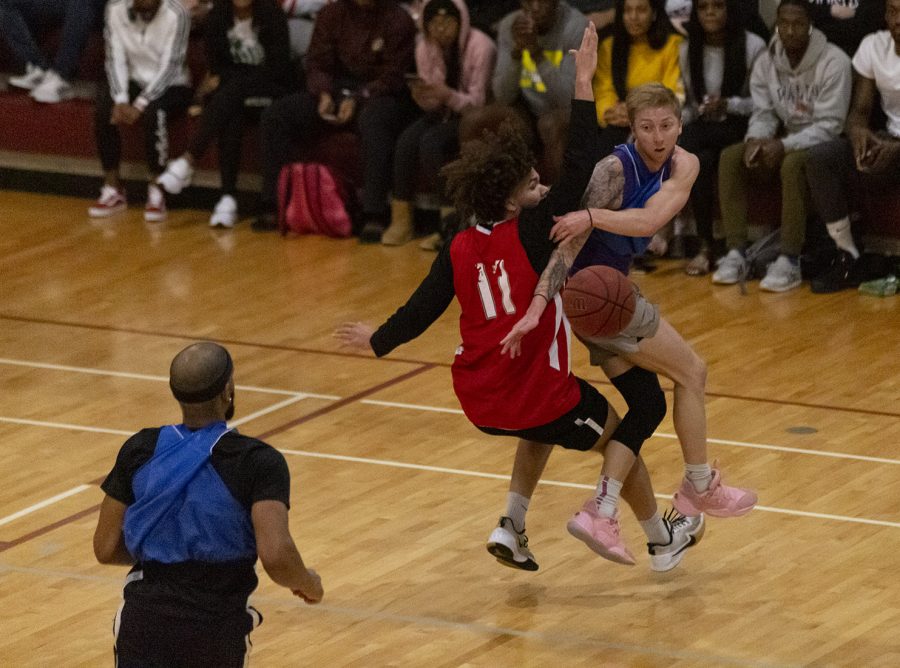 Gallery|4 Photos
Colin Stevenson
A member of 'The Royal Family' passes to a teammate while avoiding pressure from an opponent on team 'SNG.' March 5. Photo by Colin Stevenson.

In the co-ed championship game between the 9-2 Bucket Getters and the 6-3 Go Harden The Paint, the Bucket Getters came out on top with a score of 75-40. The game came to a close when the mercy rule was enacted at halftime.

Edwin Bah, sports administration graduate chose to join a co-ed team because it’s something he enjoys doing every year.

“You just get tired of being bored,” Bah said.

Bah was incredibly confident in his team’s abilities and never had any doubts during the game. 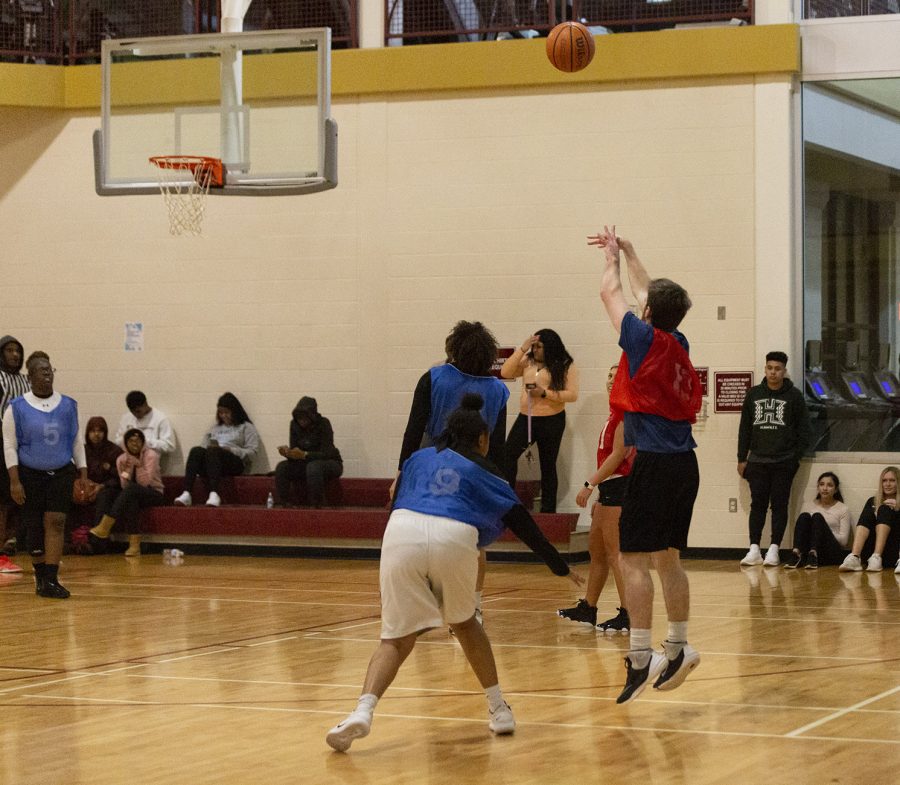