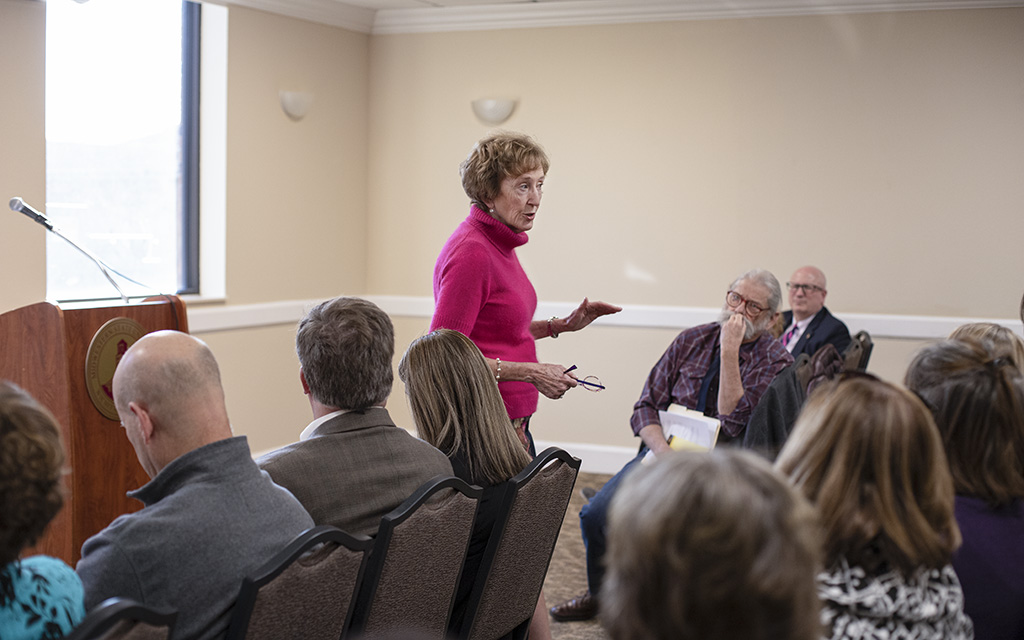 President Suzanne Shipley talks to a crowd of around 35 at the Campus Conversation event about joining the Texas Tech System. Feb. 18. (Bridget Reilly)

President Suzanne Shipley talks to a crowd of around 35 at the Campus Conversation event about joining the Texas Tech System. Feb. 18.

A day in the life: President Suzanne Shipley

It’s 6 a.m. and as the sun slowly inches across the sky, her eyes gently open. The faint noises from her dogs crack through the morning silence as they hear their food clang against the metal bowls. President Suzanne Shipley’s day has just begun. After she spends time with her dogs, she challenges her body with weight training at the Wellness Center then enjoys the most important meal of the day. At 9 a.m., once she enters her spacious office, the real work begins.

“[Being president] means that I’m the most responsible for the most things so that when a crisis happens, I’m in charge of making sure we respond adequately,” Shipley said. “I’m the landing point of anything serious, but I’m also a symbol of the university. It can be a very sobering life when you’re navigating a lot of high-level sadness, as in people’s lives or difficult situations.”

After spending years as a professor, Shipley said she decided early on that she was more talented in administration.

“When I was coming up there weren’t many females that had access to the higher forms of leadership, and early on I decided that’s what I wanted to do,” Shipley said. “I was lucky that out of the four presidents I worked with on my different jobs, two were female. This allowed me to see not just what a president did, but what a female president did. I saw how a woman translated the halls of male power into representation. I felt more empowered to develop my own persona with power that a lot of women didn’t have access to.”

Since growing up in Lubbock, Texas, she said the South has always had a special place in her heart. Shipley said she had always kept her eye open for Texas positions knowing that her mother’s mental and physical health was deteriorating.

“I already knew all about this university, so when this position opened up I said that’s the one place I’m going to apply for. I never thought [being president] to a Texas public liberal arts university would happen. I was going to keep flying back from West Virginia every couple of months, but I knew someone would need to begin to look after [my mother],” Shipley said.

Shipley described that since becoming president of Midwestern State her attitude toward life has changed.

“It’s made me happier,” Shipley said. “This is a very happy place and not all universities are. It’s a place where people are willing to change and grow. It’s fueled by pride, and it’s a place where people seem to delight in their work and education. Of course, we have challenges and difficulties, but I just think it’s a very optimistic place to be, and that’s made me more optimistic and hopeful about the future.”

Although the presidency position requires her attention at most times of the day, Shipley said she works hard to maintain a balance between her work and personal life.

“I attended a preparation for presidents with my husband and we learned about how to set goals together,” Shipley said. “We communicated pretty well on what type of presidency we would both like to be in and what he needed from me to feel like we had a balanced family life despite the 24/7 nature of the job.”

“The biggest pressure is that you have lots of different stakeholders, and they sometimes have conflicting values for your presidency,” Shipley said. “You become this proving ground where all those opinions come together, and you try to meld them into a consensus that strengthens the university. Your goal is to advance the university to keep it moving forward while also making all those stakeholders feel a part of it.”

Shipley went on to describe the difficulties of juggling the opinions of students, faculty and staff while also keeping in mind the success of the university.

“It gets hard when there are contradictions,” Shipley said. “When it’s easy is when everybody feels the same way. It gets more difficult if you’re being forced to change; the best kind of change is change that you can shape yourself at a time that works for you.”

As a result of desiring a tightly bonded university community and ensuring everyone’s voices can be heard, Shipley said she goes out of her way to create connections with students.

“It’s very important for me to connect with the students of this university,” Shipley said. “I really like to get out and be seen, not for my ego, but so that they know who their president is. I want them to know they have a president who cares about them and is present.”

Though being open to all opinions can benefit the university community, it can also open the door for negative feedback and opinions. Being the president means being the target for public scrutiny, but Shipley said she tries hard to focus on solutions rather than the negativity itself.

When the noise gets too loud, Shipley said she resorts to physical activity, reading and watching movies. She and her husband also enjoy cheering students on in the stands. Shipley said she has also found joy in motivating others to be better versions of themselves.

“The older you get, the more it seems that you can help others be a better version of themselves,” Shipley said. “Although I want to keep being a better version of myself, I primarily feel the most important thing I can be right now is helpful to other people in this work because I’ve seen and learned a lot. I feel I can help individuals navigate experiences that might be more difficult to navigate without my help, and that’s what I get the biggest satisfaction from.”

Though Shipley enjoys every part of her presidency, five years from now she sees herself on a beach under an umbrella living a life of less structure.

“I will be outside somewhere, not in an office or board room,” Shipley said. “This is the end of the road for me. I enjoy this, but this is a very structured life. I want to enjoy freedom in life.”