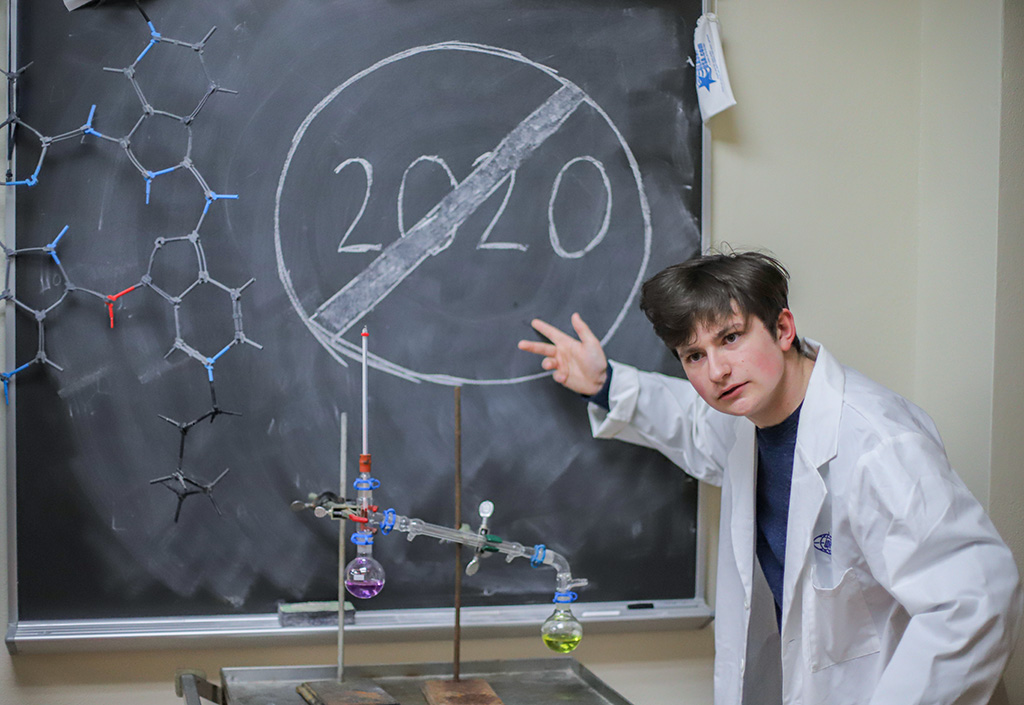 UN Secretary of Painic John P. Cross expands on cancelling 2020. Thank you to Chemistry Chair Christopher Hansen for the added props for this photograph. March. 3. Photo by Bridget Reilly

Due to the incredibly long and horrific nature of the first two months of the year 2020, scientists and politicians at a recent United Nations summit have declared the year is over and 2021 will arrive shortly.

“We were all sitting around, talking about all the horrible things that have happened in the past few years when we stopped and realized, ‘Wait a minute, that was all last week!'” John P. Cross, UN Secretary of panic, said.

Australia burst into flames, the president of the US was impeached, Harry and Meghan left the royal family, World War III hysteria was everywhere and an infectious outbreak has everyone scared for their lives, and that’s all in just the first two months.

“Somebody just started rattling off all the horrific things that have happened. Once they’d been talking for an hour or so, we decided enough was enough,” Dr. Ursula Muller, UN secretary of no-nonsense, said.

“Usually I can get away from all this nonsense by flipping the channel to ESPN, but 2020 took that away from me!” John Smith, UN secretary of things Americans care about, said. “The only normal thing that happened is the fact that the Cowboys didn’t win the Superbowl.”

While the motion to cancel this horrendous year was mostly a popular one, initially it was not unanimous. Russia voted no on the basis of not wanting to side with the US, San Marino didn’t vote because all the other member-nations forgot it existed and Switzerland tried to remain neutral.

“There were a couple of hesitant members, but we just had Greta Thunberg yell ‘How dare you?” at them for two hours and they caved,” Sven Svenson, UN representative from Sweden, said.

Canceling a year may seem impossible due to everything we know about the space-time continuum, but members of the UN were quick to point out that this is far from the first time they’ve ignored science for their own interests.

“This isn’t some radical issue that is basically out of our control like gender equality, human trafficking or treating people with human decency; this was a simple fix,” Gregory Worthless, UN chairman of human affairs, said. “Scribble out your calendars, because March 2020 is the new January 2021.”

Following this huge announcement, The Wichitan would like to formerly wish all its readers a happy New Year. Here’s hoping 2021 actually makes some sense.