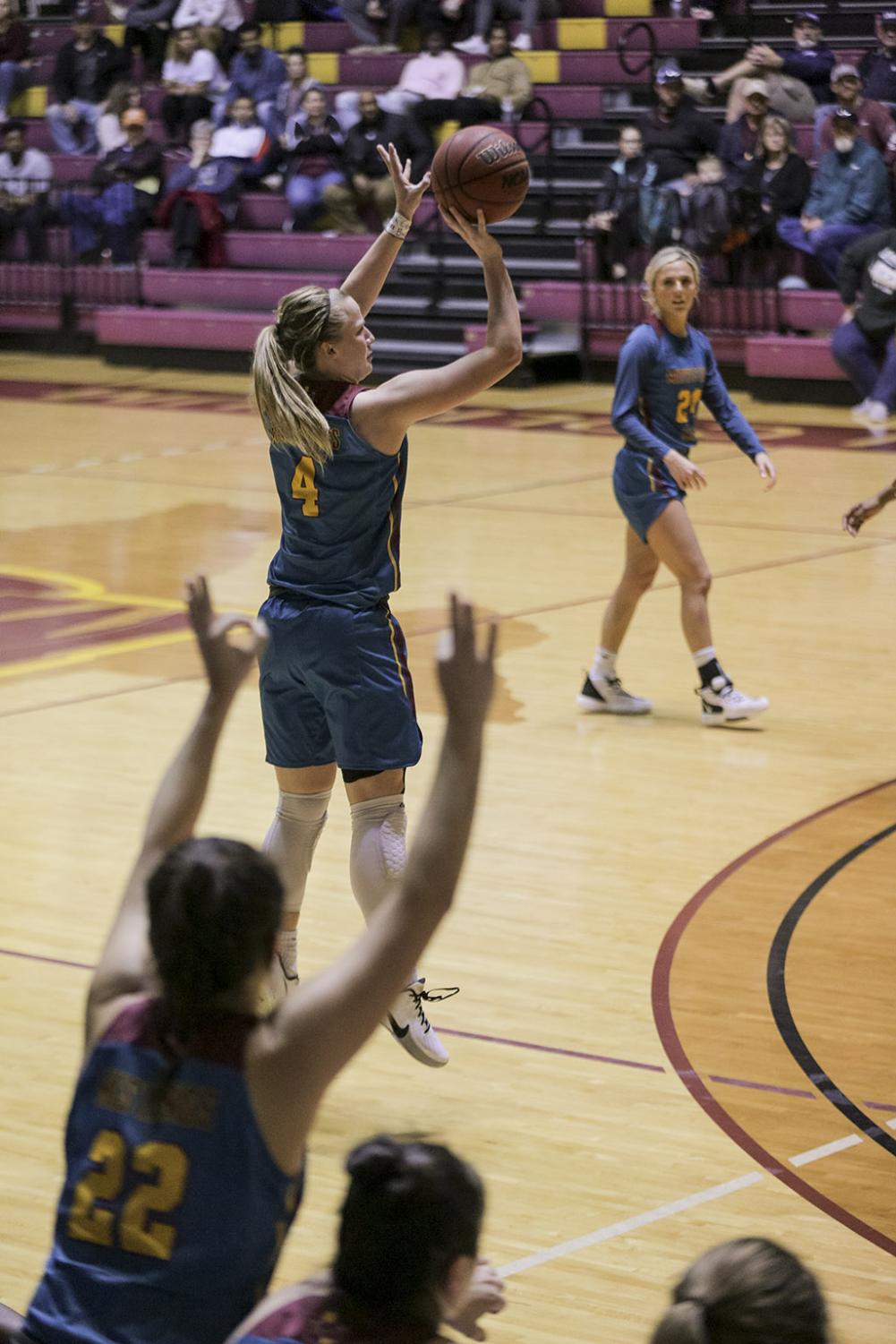 Business finance senior and guard Mica Schneider leaps into the air to shoot a 2-pointer. Feb. 20.

The Mustangs berth another nail biter

Tension rose in the house of the Mustangs as they went against Arkansas Fort Smith Lions, winning 75-70, Thursday, Feb. 20 at 5:30 p.m.

Adversity continues to hit the team as their Head Coach Noel Johnson stepped away last week to fight against ovarian cancer and the constant battle to keep their spot in the Lone Star Conference tournament.

The Mustangs played tough defense against the aggressive Lions, recording 45 rebounds, 7 blocks and 6 steals. Kityana Diaz (No. 14), forward and radiology junior, constantly reminded herself and her teammates to stick to the game plan.

“It’s still basketball, and we still have to knock down free throws and play our best, regardless of how the other team approaches us. Just reminding each other to stick to the game plan,” Diaz said.

With 32 percent of the Mustang points coming from free throws, Interim Head Coach Christopher Reay worked hard to stay focus on the game plan through a large number of fouls.

“It’s just a part of a basketball player; you have to adjust to how the game is being called. If they are not calling, you have to go to the rim and knock down shots, and if they call it, we have to get to the line and make them,” Reay said.

“The goal is not to keep it, but to keep climbing the ladder,” Reay said

Markalya Johnson (No. 12), guard and accounting freshman, and Mandy Withey (No. 23), forward and elementary education freshman, have both played more than half the season and now look forward to getting a conference tournament spot.

“We should stay composed and not let the pressure of the tie for 11th get in the way and just play our game like we know we can,” Johnson said.

The two freshmen made themselves known on the court defensively, putting up 8 rebounds together.

“Not getting ahead of ourselves is the key. Our coach always says ‘One game at a time.’ The next game is the most important, and we go on to the next one. So if we keep that mentality, then we will be great,” Withey said.

The Mustangs will come out for their last home game and senior day Saturday, Feb. 22 at 2 p.m. in the Ligon Coliseum.