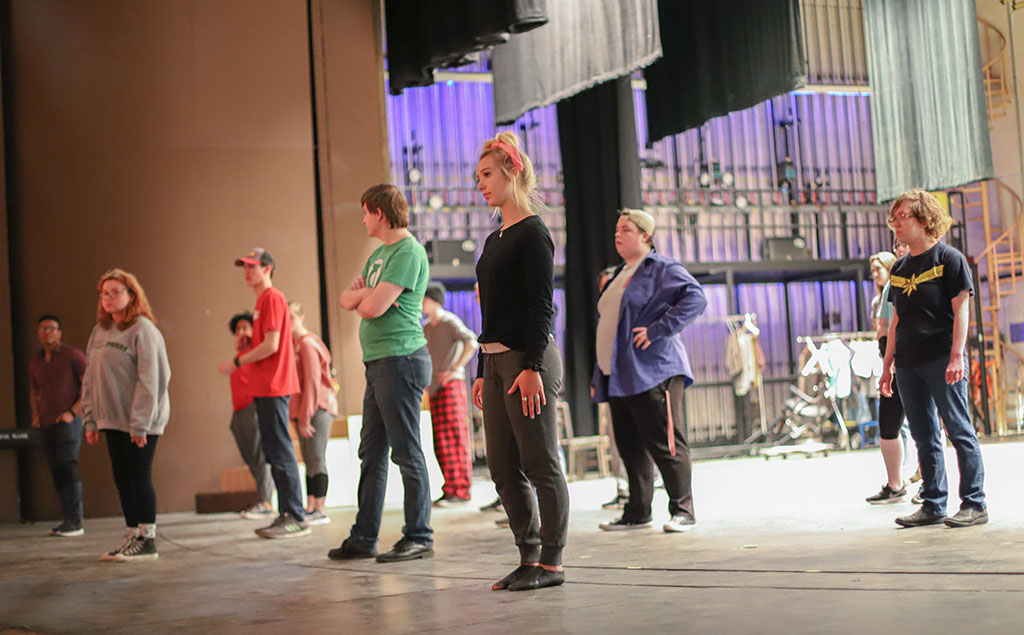 Students apart of the musical Little Shop of Horrors rehearse a scene. Feb. 16.

Behind the set of “Little Shop of Horrors”

Rehearsals for MSU’s 2020 spring musical Little Shop of Horrors have been in full swing since the first week of the semester, and there will still be many more before the opening night.

For this musical, rehearsals are split into three parts. Acting and blocking led by Sally Story, choreography led by Morgan Mallory and music led by Dr. Dease. I had the opportunity to sit in during a choreography rehearsal to share it with those who may not know the typical process of preparing for a performance.

Rehearsals began at 5 p.m. When I first arrived, Nikki Anderson, the assistant stage manager, was sweeping the stage. The set was a wooden platform and walls on wheels. One side represented the inside of the shop, and the other was meant to be the street outside.

According to director Sally Story, the set, along with puppets used in the show, has been in the process of construction since the beginning of the semester under the direction of Eric Koger, Department Chair and professor.

After the stage was cleared, and the cast was signed in, Morgan Mallory, the choreographer, got the ball rolling.

Rehearsal began with a dance number between Seymor, portrayed by Steven Singleton II, and Mr. Mushnik, portrayed by Calvin Russell. The actors walked through the dance and experimented with blocking, where the actors move to, before running the song with the Broadway music track.

This process repeated itself through most of the rehearsal period. Songs were first talked through step-by-step, then walked through and then run with the music.

The actor’s dancing has to be extremely precise for the end picture to be clean. Actors worked on specific angles for dance moves, foot placement and words to move on to ensure everybody’s movements were in sync.

Jordan Ingram, music education freshman, was cast in her high school’s production of Little Shop of Horrors as a trio member and now portrays Audrey in MSU’s production. During the actor’s five minute break, she gave insight into what rehearsals are like for her.

“I’m in rehearsal at least four to five hours every day,” Ingram said. “That much time is very typical for anybody involved in the play. And I spend about an hour before or after rehearsal working on my lines and singing.”

After the break, the wooden set was turned around, and rehearsal continued as it had before: talk, walk and then run the song. For the next hour, actors danced through scenes and songs along Skid Row.

MSU typically puts on a musical every other year. However, with the addition of a musical theatre minor, Story says that she hopes to direct musicals more frequently.

Story believes that the impact of being involved with a theatre show encompasses the students, relationships formed and a greater campus community.

“I truly hope this will bring more attention to the Musical Theatre program we are trying to build here at MSU Texas,” Story said. “I would love to see us do more musicals here and offer more opportunities for our students.”