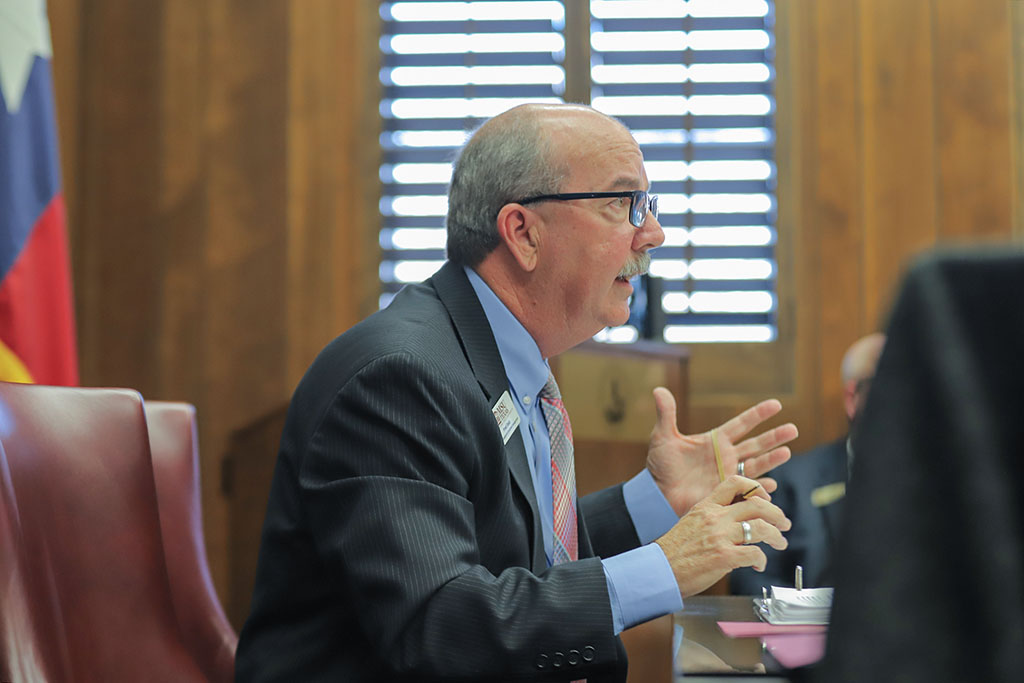 Board of Regents members discuss 20-21 changes

After hours of discussion of the potential changes for this institution, members of the Board of Regents introduced what will be implemented into the 2020-2021 academic school year.

Suzanne Shipley, university president, announced the request to move the initial increased tuition rates downward after looking over the estimates of tuition and fees elsewhere in the state of Texas.

“That original recommendation and proposal was a rate of 2.6% increase for our first-year students who would’ve started in Fall 2020,” Vice President of Administration and Finance Beth Reissenweber said. “Earlier this week, as President Shipley mentioned, she wanted to check where this price would put us in the market place. So, there is a new fee proposal.”

The administration recommended the creation of the Global Preparation Program, and a new tuition category for international students from certain partner secondary and postsecondary institutions, beginning in Fall 2020. The goal of this program is to increase the enrollment of well-prepared international students. International students currently pay one of three tuition rates: Tier I, for students earning a $1,000 competitive scholarship and earning a waiver to pay in-state tuition (limited to 5% of the previous year’s enrollment); Tier II, which is resident tuition plus $90 per semester credit hour; and Tier III, which is nonresident tuition. Tier II is not eligible for formula funding.

Vice President of Enrollment Management Fred Dietz said there was a 17% increase for new enrollment.

“We also made some headway into some of the losses we had in the fall,” Dietz said. “We’ve cut those losses in half for the new students coming in, in the spring so we’re pleased with that.”

“Yield” is something that the enrollment management team is looking at in terms of admission according to Dietz.

“As the agricultural [community] looks at the yield of crops, we look at the yield of admissions and what that translates to from an enrollment standpoint,” he said. “This is a measure that we track really closely. The higher your yield, ideally, the more selective you are in terms of admission.”

“Of the applicants we accept, the number that enroll, that’s the percent that we yield. This past year we came in at about 28% and the year prior we were at 33%,” he said. “Ideally, we want to be in that low 30% range; that’s a good number for us. That yield really helps us begin to know how many students are going to come to the institution. For the state of Texas, the average yield rate is 36.7% so we’re not that far off.”

“We expected to be less down than we were for fall and we’ve caught up some of the enrollment for spring,” Shipley said.

Retention continues to be a focal point for the university. Dietz said the university is partnering with the EAB Student Success Collaborative to provide the university the ability to be more efficient and responsive to students in a timely manner.

“We have partnered with EAB for our student success collaborative,” Dietz said. “This is a software product that will allow us a lot of analysis, will provide us a lot of data related to our students and trends that we’re seeing. It will also help students in terms of how they interact with the university and how we interact with them. That project really has kicked off and we will begin implementation of that over the course of this spring and have it [fully] implemented by the end of the summer.”

Dietz said the overall target for retention is 75%. According to the Board of Regents Minutes, the retention of freshmen increased from 64.6% in Fall 2017 to 67.4% in Fall 2018. Dietz did not provide retention rates for classes other than freshmen.

Room and Board Rates

Keith Lamb, vice president of student affairs and enrollment management, proposed a slight increase to room and board rates based on the higher education price index for the fiscal year of 2020-2021.

“We believe that if we follow the higher education price index this year that our housing operation will be in good financial shape for this next coming year,” Lamb said. “We are proposing in our freshmen residence halls a 2.55% [increase], our suits in McCullough Trigg a 2.48% [increase], Legacy a 2.44% [increase], and our apartments a 2.43% [increase]. [It will be] a 0% increase for the summer.”

According to Lamb, the university’s rates compare favorably to other institutions.

The registrar’s office has made changes to limit the amount of paper used by becoming more electronic.

“We use a lot of paper on this campus and forms have to travel through [many] different people before they finally land in the place they’re supposed to. That process isn’t only just cumbersome and environmentally not-great at this point, but it really causes problems for faculty and students,” David Carlston, faculty senate chairman, said.

Carlston said that the electronic system benefits both students and faculty. He also noted that the faculty has seen visible improvement since these initial changes.

“The registrar’s office has made a lot of effort to start some initial changes to allow some things to be a little bit more electronic and facilitate things for students in general. We have seen a significant impact in terms of both workload and retention of our students as well,” Carlston said.

A report from Kyle Williams, assistant athletics director, showed that male student-athletes’ grade point averages continue to fall consistently behind the overall population of male students on campus and those of male athletes at other schools in the Lone Star Conference.

“You can see in those charts that a couple of sports in the men’s category fall every semester below our men’s GPA, and we have urged Mr. Williams to work with our coaches to see how those grade points can be increased,” Shipley said.

The GPA of the women athletes has been much higher than not only the male student-athletes but also the overall female population on campus.

“We can truthfully say for our women’s sports that you are more likely to do better academically as a student-athlete. It’s mixed for our men’s sports,” Shipley said.

“There is a balance that our kids have to go through, certainly, with practice, meets and games and all those things that are with that. At the same time, we have to balance the school work and grade point average, and ultimately graduate,” Williams said.

Williams believes that the key to academic success in student-athletes begins with the recruitment stage.

“My challenge to our coaches is to, as we talked about, make sure we are recruiting the kids and the students that are going to have a chance to not only succeed on the field or court but in the classroom as well,” Williams said.

The university will soon begin a new partnership with Vernon College in hopes to prepare and acclimate new students to university life and courses. Dietz explained what this partnership should look like.

“We approached Vernon in late fall, right before the break. We talked about allowing students to be enrolled at both institutions, potentially live on campus, eat our food, get acclimated to MSU, take the majority of their course work at Vernon while also taking one course here and allowing them to make that transition from Vernon college to MSU,” Dietz said.

While this partnership may seem strange to some MSU students, this is a common model that many universities in the state take advantage of.

“It’s a pretty common model throughout the state; Texas A&M  has one with BLEND, Texas State has one with Austin Community College [and] Texas Tech has one with South Plains College,” Dietz said.

This new opportunity would mostly benefit incoming students or applicants whose grade point average is too low to be admitted at first. This would allow them to still get the campus experience while also gaining hours and increasing their GPA at Vernon College.

“Those students [that]  may not meet traditional student requirements are provided the opportunity to eat and live on campus and go to Vernon…and then they get here a year and a half down the road as degree-seeking full-time students,” Dietz said.

The 7.7 million dollar renovation of the Moffett library building is drawing closer to completion after students had been unable to access the first floor for the entirety of the Fall 2019 semester.

“We’re within about six weeks of being able to complete this project and for the students to occupy the first floor again. We’ve taken out the arches, the doors, the little benches and we’ve opened it up a lot,” Kyle Owen, vice president of facilities services, said.

Also scheduled to be reopened in six weeks is the Taft Bay window area, a popular hangout spot for students.

“We’ve enclosed that area so it can be used kind of like as a reading room or a study area for students,” Owen said.

The new facilities services building being built across from Centennial Hall is still anticipated to be done this summer despite being slightly behind schedule.

“They’ve framed in about half the outside and much of the interior. We can’t finish the other half because it just keeps raining,” Owen said.

The Bank of America building was closed on in December. According to Owen, about two-thirds of it will be used for a warehouse.

“A lot of walls are being demoed out. We actually worked out a deal with the Wichita Falls Sheriff’s Department and we’re using inmates to save some money in doing the demolition,” Owen said.