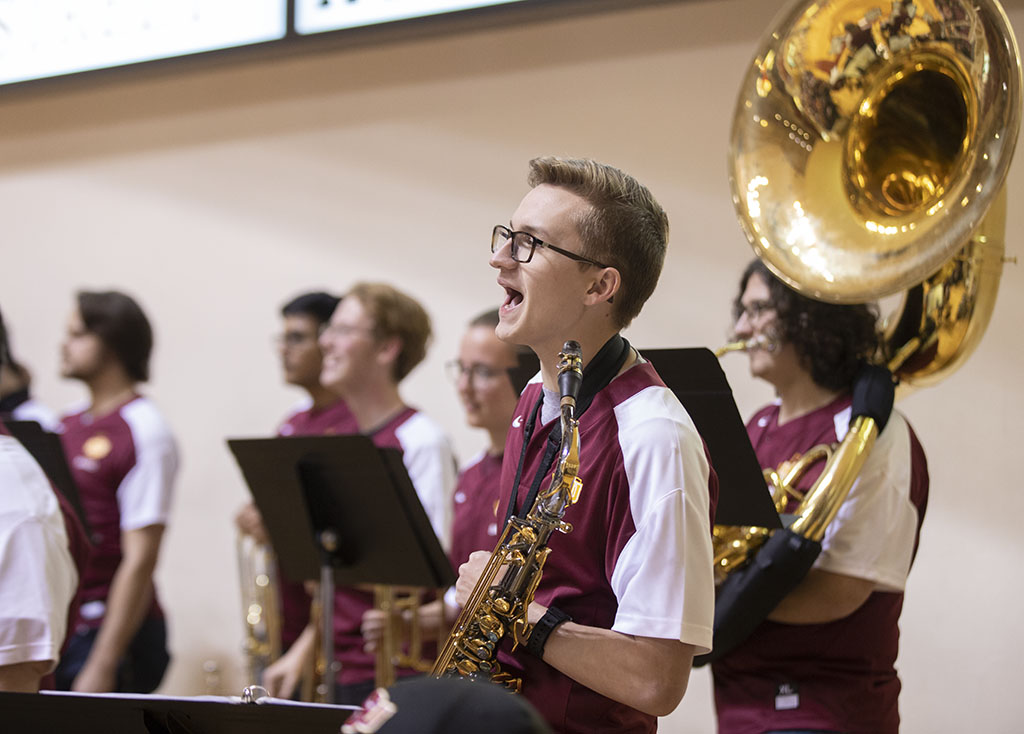 What the pep band lacks in pom-poms and megaphones, they make up for with cheers, jeers and energy.

When fans enter the Colosseum for a maroon and gold basketball game, they know the players on the court won’t be the only ones putting on a show for them. The band is active throughout the entire contest, playing tunes during breaks in the action and taunting the opposing team when play resumes. While the band is far from the action on the field during football games, they set up just feet away from the court during basketball games.

“I personally enjoy basketball games a lot more [than football games] because they are much easier to get into,” Noah Johnston, euphonium player and history freshman, said.

“I prefer basketball games more than football because I have a far better understanding of basketball, and the atmosphere is more relaxed,” Lilian Adams, trombone player and music education sophomore, said.

The tradition of cheering and poking fun at the opposition is one that the band has done for years and it continues to be embraced by the new crop of performers. According to the band members, it wasn’t one person’s idea to do more than just play their instruments. Players began to invest themselves in the game, and these traditions slowly came to be customary as a result.

“I think we as a collective do things in the spur of the moment, without much thought, ” Johnston said. “I think that’s a part of the fun though.”

One of the band’s signatures is dancing and making as much noise as possible during opposing team’s free throws. Often times, the band’s actions are more spontaneous than that. They yell out air ball when a player misses the rim completely, hype up a Mustang athlete when they make a good play and do everything in their power to disrupt the opposition’s play.

“If I had to pick [a favorite thing we do], it would be when we call out players names on the opposing team and give them joke advice or even incorrect advice,” Johnston said, “Or we say the actions they are doing out loud as if we were people hired to do audio descriptions.”

While the home crowd is rallied by their pep band, the band’s actions have been known to irritate the opponents on more than one occasion. The away team’s players can often be seen glaring off the court to see who’s jeering at them. Even the players on the bench have exchanged words with the band on occasion. The band just sees that as an encouragement to keep going.

“We have 100% upset the other team before. I enjoy it because they play exactly into what we want them to do,” Johnston said. “We want them to get angry with us [and] get their heads out of the game. If they are so focused on being mad at us, they don’t focus on the game, and that gives our team a chance to wipe the floor with them.”

“I imagine people don’t sign up for pep band as often because it feels like you are less obligated to join, and there isn’t that much incentive to be a part of it other than a small stipend,” Johnston said.

According to pep band members, playing during basketball games gives them time to socialize with both their fellow band members and those in the crowds. Since there are fewer lulls in the action, basketball games also give pep members a chance to express themselves without using their instrument.

“I thoroughly enjoy interacting with my peers and being able to let loose and yell a bit. It’s a wonderful way to distress,” Adams said.