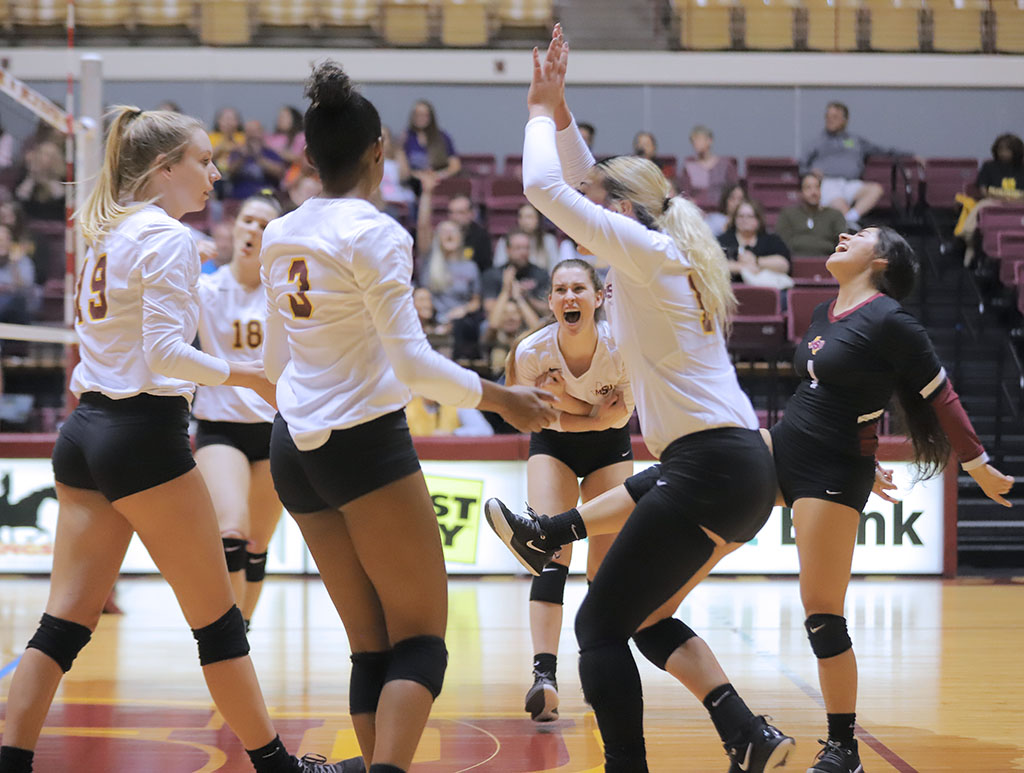 Volleyball clinched a playoff berth with a 3-1 victory over Cameron University on senior day, Saturday, Nov. 16 at 2 p.m.

The team finished fourth in its division with a 3-7 record, qualifying them for the Lone Star Conference Tournament. This will be the team’s first tournament under head coach Valerie Armstrong and its first playoff berth since 2016. The only active Mustang who was also a part of that 2016 playoff team is Sarah Glawe (No. 10), setter and education senior.

The match was used to honor the team’s three seniors: Glawe, Sarah Eakin (No. 11), middle blocker and nursing senior, and Rockelle Gholson (No. 14), outside hitter and mass communications senior. Eakin’s seven blocks in the match bumped her Mustang career total blocks to 322 (the second-most in team history). Gholson led the ‘Stangs on offense with 15 kills. Glawe, who is seventh in all-time career assists, had 26 assists and three service aces.

“[The seniors] have been leaders for this team and have shaped this team to what it is today. We could not have gone to the conference tournament without their leadership,” Howes said. “They’ve all been role models and mentors to me, and I’m very thankful for all they’ve done for me.”

With the exception of the ‘Stangs first set win, 25-13, the match was a back-and-forth affair. The team fell 25-27 to the Aggies in the second set, despite six kills by Lauren Honeycutt (No. 19), middle blocker and kinesiology sophomore. The team then won the last two sets 25-18 and 25-21 with Honeycutt delivering the final set-winner off an assist from Glawe.

“We were solid,” Armstrong said. “We did what we had to do to get the win.”

The volleyball team begins the Lone Star Conference Tournament with a match against West Texas A&M on Tuesday, Nov. 19 at 6 p.m. in Canyon, Tx.