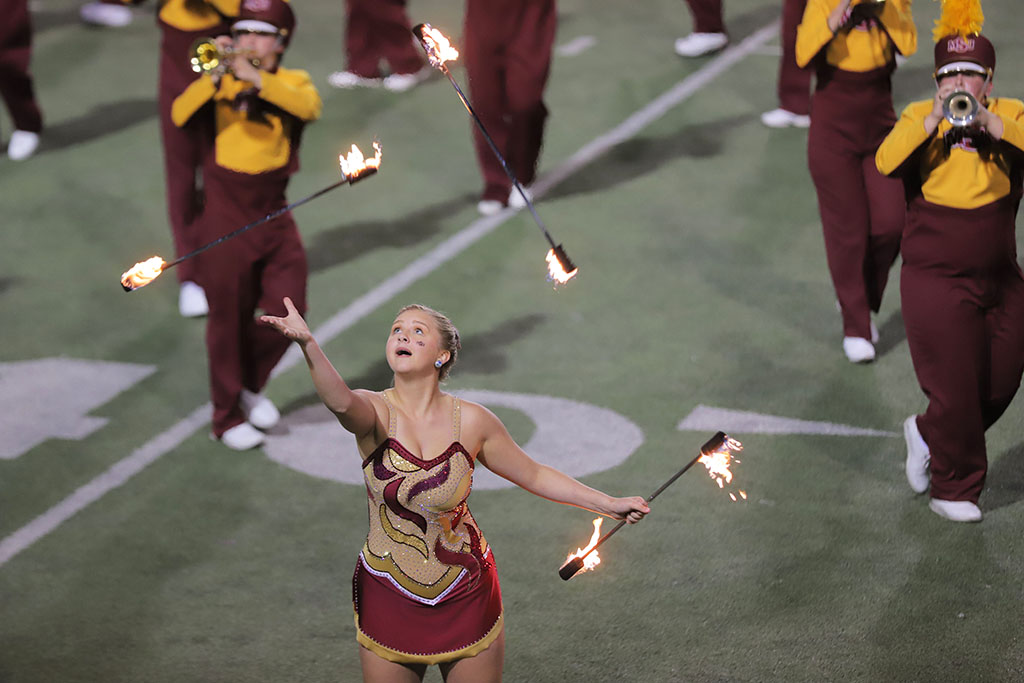 The girl behind the fire

As her sparkling outfit catches the light from the sun and shines across the field, she slowly steps out onto her stage with her head held high and her body completely still. The music played by the band fills the stadium with vibrations, and the audience gradually gazes toward her direction. She gracefully throws her first baton into the air. Alex Maggard, social work junior, is the university’s sole baton twirler since 2012.

“When I’m on the field twirling, all my problems go away, and I feel completely free in that moment,” Maggard said. “Nothing else matters when I pick up those batons.”

Since she was young, Maggard has been in the spotlight. She has participated in several pageants, twirling competitions and parades across the country. From being the scholarship winner for the AAU Junior Olympics in 2017 to twirling for the ESPN Twirl Mania in Florida, Maggard was born to be a star. Although twirling was originally used as a therapy tool for her growth and development as a child, she could never escape the natural connection she felt toward twirling.

“Being a baton twirler has impacted my life tremendously,” Maggard said. “Not only has it helped me overcome my fears of performing in front of large crowds of people, but it has also taught me how to coexist on a team and work together with diverse individuals who possess different talents and perspectives. I’ve also been able to create memories a lot of people my age will never be able to experience.”

Maggard also said through twirling she has learned to just be herself.

“In moments like these, where you put yourself on a platform to be judged, it’s important to stay true to yourself and believe in your skills,” Maggard said. “Whether you have good or bad performances, someone is going to judge you, so you might as well have fun at what you’re doing.”

Despite personal rewards she has gained from being a twirler, Maggard has dedicated most of her life to practice. She devotes two hours each day to practice, and on Tuesdays and Thursdays at 8 a.m. she trains with the band.

“Twirling a baton is not something you can just pick up one day and be great at it,” Maggard said. “It takes an extreme amount of dedication and perseverance to receive the results you desire. As effortless as baton twirling may seem, it requires self-disciple, stamina, memory retention and lots of hand-eye coordination.”

She said it takes even more effort and discipline to twirl batons that are lit on fire. During every half-time performance, Maggard lights three to four batons on fire and simultaneously throws them into the air while trying to avoid the fire touching her skin or the ground.

“Twirling a fire baton is far more difficult than twirling a normal baton,” Maggard said. “The fire creates limits on the variety of tricks you can perform, and when the wind is blowing a whole other set of problems comes into the picture. Though it is far more difficult to control the fire on the batons, I personally enjoy the thrill of it all, and I’ve enjoyed it since the moment the fire baton was placed in my hand.”

On game days, Maggard said she still becomes overwhelmed with anxiety and nervousness.

“Before I perform, I still feel the same emotions I felt when it was my very first performance on the stadium field,” Maggard said. “I get nervous during every single performance, especially if it’s really windy or sunny. But once I step on the field, every doubt or fear I once had leaves my mind.”

After college, Maggard plans on opening up a twirling studio so that she can help children with special needs learn to interact through performance and develop new skills.

“I have always wanted to be a coach because being a coach means being a role model,” Maggard said. “I always have kids come up to me after my performances saying that they want to be just like me, and it just reminds me that the children are always watching. It also motivates me to be in a position where I can personally impact their lives.”

Maggard said she wants to be remembered by her dedication and her desire to be a role model.

“I want to leave a legacy that coincides with being a role model for the younger generation. I want to inspire them to work hard at whatever it is they aspire to do,” Maggard said. “I want them to know that every person can make a difference.”