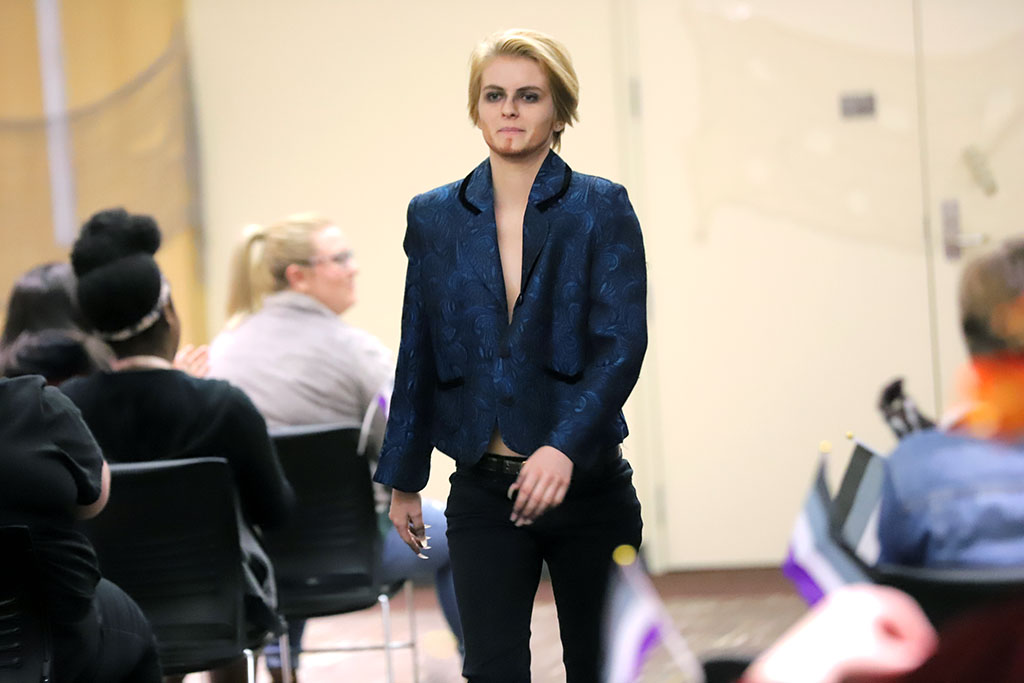 Danny walks back after a performance in the ‘Dragged to Hell’ drag show. Oct 25 | Photo by Jordan Breedlove

Dragged to hell and back: the inspiration 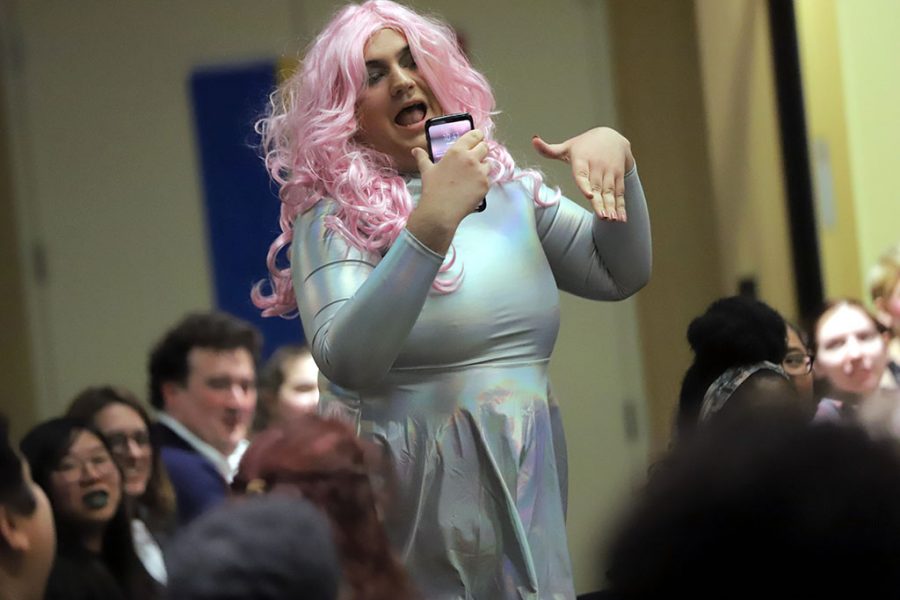 Gallery|6 Photos
Ellie Coaleye performing her set for the audience at Dragged to Hell Oct. 25. Photo by Jordan Breedlove

Drag shows; a place where a person can be the exact opposite of who they are in real life with no limitations.

Agatha Haddock, English senior, better known as Ellie Coaleye said, “I don’t consider myself a very sexual or a very attractive person. My character sees herself as both of these things, so for me, it’s listening to music that makes me feel good about my body. So, listening to things like Lizzo.”

Herb McCullough, a political science graduate, or Tulsi said, “I don’t know about most people, but I really do not have a process or a mindset in performing, other than shaving and calling myself by my stage name ‘Tulsi.’ I tend to just be myself and wearing a dress and adopting a more feminine name does not change that one bit.”

The process of getting ready can be very extensive, considering the look that the performers are shooting for, and at times they have inspirations that led them to their final look.

In Coaleye’s case, she went for an anime-girl inspired look using a pink wig and Japanese streetwear to pull off an edgy vibe. For her second look, she had a heavy metal number and wanted to contrast that with a very regal look.

For Fabien Wallace, biology pre-veterinarian senior, they had a look inspired by their Dungeon and Dragons character named Tedward, that has goat legs, horns and fangs with black eyes and a white iris.

Alex Collins, coordinator of student organizations and leadership programs, had a unique look that was initially supposed to be inspired by Dolly Parton, but it turned out to be more along the lines of a 1950s stay-at-home mom. Some of his friends even told him that he gave a “Ms. Frizzle” or a “Mrs. Doubtfire” feel to his look.

Tulsi did a performance based on songs from “The Nightmare Before Christmas” and “Bride Corpse.” His grandmother gave him a dress her uncle gave her. The dress was too big for her. Given that he was going for the southern bell girl look, it was a blessing in disguise for Herb.

“For me to get ready, it really just depends because there are sometimes where I can get in doing a really simple look getting out in 15 minutes and go, but this look today took me about 3o minutes because I tried things,” Coaleye said. “I’m still very inexperienced with makeup, so I usually don’t do contour and that is something that I did this time. I also used mascara on my eyebrows to darken them so, it took me about 45 minutes.”

Wallace said their drag took some time but their eyebrows took the longest amount of time.

“I’m for sure not professional, I don’t have all the resources that they have to do makeup and stuff. Every time I get into drag I try to change it up,” Wallace said. “Last year I did the glitter beard, this time I did actual hair, and that took a bit. But other than the makeup and stuff, the makeup didn’t take too long it was mostly the beard. The eyebrows also took a long time to do because you have to glue them down [and] foundation the shit out of them.”

Collins look was something that we were all familiar with, but actually took quite a bit of time.

“The outfit was super simple so I just bought pieces and threw them on, the makeup took an hour and a half which is a lot for just my face,” Collins said.

For Tulsi’s first time performing in a drag show he said it took him no more than 30 minutes.

“I’ve never worn makeup in drag. However, I am planning to wear it next time so it might be taking me a tiny bit longer to prepare. My grandmother really wants to do my makeup next time,” Tulsi said.

Finding out about P.R.I.D.E is a different process for everyone.

For Wallace, they were a member of P.R.I.D.E since it first started when Christopher Cruz, MSU alumnus, started the organization in 2015.

In Coaleye’s case, the drag shows were how she found out about P.R.I.D.E. She performed at her first drag show two years ago and she loved every second of it. She said it made her want to be a part of P.R.I.D.E.

Tulsi said he found out about P.R.I.D.E. during their protest after the 2016 U.S. Presidential Election. He said he met some officers when he was a reporter for The Wichitan.

Tulsi said, “I was also assisting in revamping the MSU Texas version of Amnesty International and many P.R.I.D.E. members have joined Amnesty. P.R.I.D.E. is filled with very compassionate people who I have befriended. I found out about P.R.I.D.E.’s drag show in the first meeting I attended in Spring of 2017. I just decided to participate out of the blue and have been doing it ever since.”

Collins has a different story when it comes to why he performed in the “Dragged to Hell show.”

“In my role as coordinator of student organizations and leadership programs, we do our best to support our student organizations here on campus. This was an easy way for me to show some support. Especially as a queer-identifying person, showing students that there is a support structure within faculty and staff is very important,” Collins said.