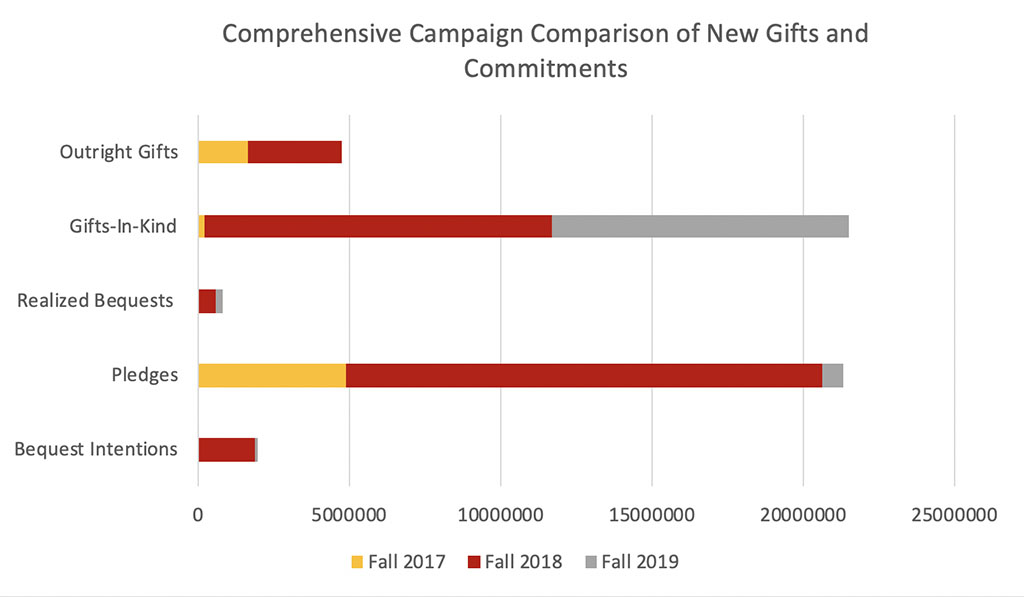 Bequest Intentions: Is a donor’s notice of their intention to make a planned gift.

Pledges: A company or persons pledge to give a planned gift.

Gifts-In-Kind: Goods or a service given as a gift.

Outright Gifts: Is a donation of cash, other assets such as stock, real estate or personal property.

The university’s comprehensive campaign met its goal of $50 million in the third year of a seven-year campaign. This campaign began Sept. 1, 2016, and will continue until the university’s centennial celebration in. The three pillars are enriching lives, enhancing teaching and learning, as well as investing in the campus and community.

While the campaign has surpassed its original goal, not all donations are in cash.

The $1.5 million pledge that established the agricultural business program is solely for that and can’t be used for anything except that program.

With various programs and equipment being stared and donated all students will benefit from this campaign in various ways.

Vidmar said, “[We need a comprehensive campaign because] your tuition is too expensive right now, wouldn’t you like it to be less?”

Students won’t physically see all of the benefits of this campaign because a lot of the money being raised goes to scholarships. Some of the bigger benefits they will encounter directly are things like the agricultural business concentration, the piano replacement project in Fain and the equipment supplied by Shimadzu Medical Systems for the radiology department.

“Almost everything to this point from our leadership gifts have really had a student focus and a really academic focus,” Julie Gaynor, marketing and public information director, said. “We have leadership gifts that are going to set the foundation for a new activity center, one that hasn’t come to fruition yet, so think about how many students that will affect.”

Vidmar said the Shimadzu equipment has helped the university become the first-named school of radiological science in the country. The equipment itself is equivalent to $2.4 million.

One gift received during this campaign that Gaynor believes may potentially affect all students is the Canan Food Scholarship.

“We had a donor who realized there was a need because he’s a professor on campus, and that lead to this program for students on campus who are struggling to have a resource for food,” Gaynor said.

Another gift was the renewal of both Schlumberger and IHS Markit’s software licenses saving the university from paying a combined total of $18.1 million.

Vidmar said, “The Schlumberger is a company in IHS that provided software…the equivalent to those is over $10 million. So, our students are being trained in geosciences on state of the art software that they’ll use when they get a job.”

The benefits the faculty have seen are faculty research, or fellowships, that has allowed them to work on projects and bring that experience back to the classroom to share with their students.

The Priddy Scholarship stems from the comprehensive campaign and currently gives a full ride to 40 students.

“We wouldn’t have the Priddy scholars if we didn’t have the campaign most likely,” Vidmar said. “The Priddy Scholars Program was a direct result of a conversation that Dr. Shipley had with leaders of the Priddy Foundation.”

University President Suzanne Shipley, said though they have reached the campaign goal, they will continue to “blow on past it” until the campaign ends.

“What’s interesting about the gifts we’ve received is that a lot of them are scholarships,” Shipley said. “So you look at the Priddy Scholars, that’s all-new. That’s 40 students who get a full ride who never did before.”

She estimated the Priddy Scholarship was a gift of over $10 million. She also said there are plans for Bolin Hall and the Daniel Building to be enhanced in the future.

“What I like about the campaign is that it spread nicely around our different needs. Greek life will see a real improvement on this campus once the Daniel renovation is done because Greeks will have a place to meet. Right now they suffer from a lack of space,” Shipley said.

She said the campaign members try to gauge what the campus needs and ask the donors for specific items or resources.