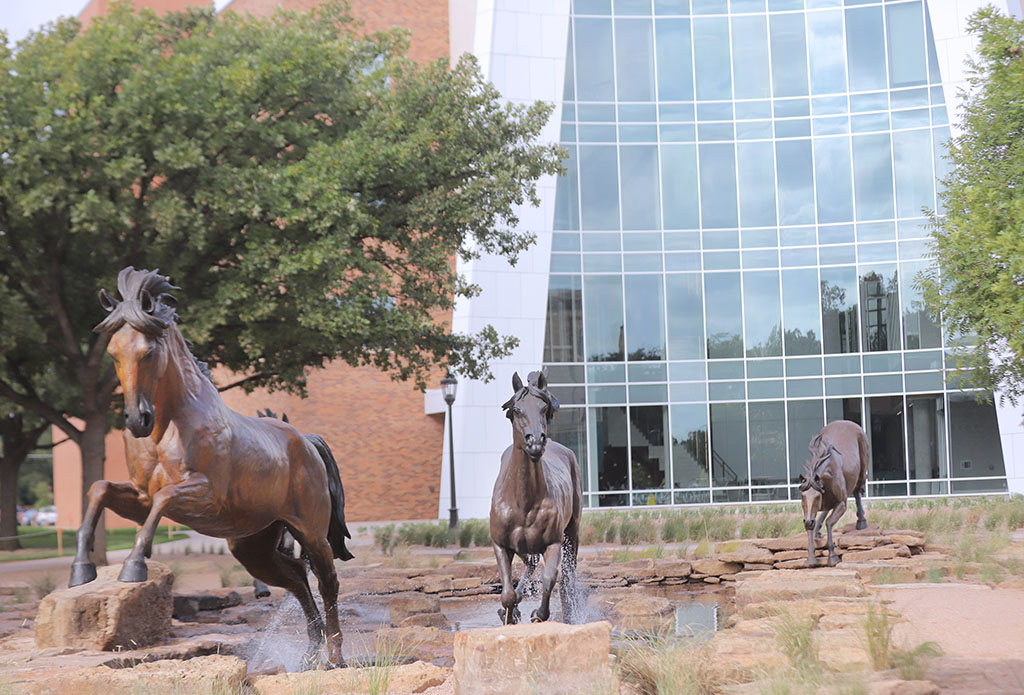 Four statues of Mustangs gallop through the little lake outside of Centennial Hall. Oct 1. Photo by Bridget Reilly

Four statues of Mustangs gallop through the little lake outside of Centennial Hall. Oct 1. Photo by Bridget Reilly

student and faculty response to the new health sciences building

As the university welcomes returning students and newcomers to the fall semester, the campus opens the new health sciences building of Centennial Hall to its students. This building holds all the departments of the Robert D. & Carol Gunn College of Health Sciences and Human Services in one area, including dental hygiene and radiology.

The planning of Centennial Hall began two years ago. The building was originally planned to open in March of 2019 but after a few months of delay, the college opened its doors just in time for fall registration. The building was originally supposed to be finished in a year, but due to an increase in rainfall, construction was interrupted, causing the opening to delay.

President Suzanne Shipley said, “We anticipated people to move in during spring break, use the rest of the spring to get established, teach summer classes and then start in the fall. We started moving in a week before school started in the fall. That was about a four-month delay.”

While the delay served to be an inconvenience to the students, it provided the funds necessary to pay for the horse sculptures instead of the university needing to find donors to fund them.

“The good news is we were able to invest that money longer, that we would have to pay for a finished product and the money that was invested made extra profit which gave us that beautiful landscaping at that horse sculpture,” Shipley said. “The delays helped us hold the money longer so we made money on it and we could pay for that landscape.”

“In 2014, National Council of State Boards of Nursing did a study where they found out that simulation and being in a human clinical environment is exactly the same,” Chandler said. “This is where the big push for simulation [took place]. It doubled the student’s senses without hiring any more faculty.”

The purpose of the simulations is to provide students with realistic scenarios that they may come across in their fields.

Lindsey Craig, radiology junior, said she viewed the new equipment as an opportunity for students like her. Instead of solely relying on a traditional classroom, students can be hands-on.

“With this new equipment, it allows us to actually get to use our hands and get to see how the process actually works… it isn’t until we go into the labs that all the information actually makes sense.”

The first floor of Centennial Hall is for dental hygiene, containing the Gaines Dental Hygiene Clinic. Along the floor there are five exposure rooms for dental-related radiology. The floor’s setup is designed like a real dentist office with dental chairs and stations with mannequin heads.

The second floor is the Shimadzu School of Radiology Sciences, named after one of the three corporate sponsors of Centennial Hall. Shimadzu sponsored seven x-ray machines and donated several millions of dollars. Instead of its traditional one-year warranty, Shimadzu provided the machines a ten-year warranty.

Jeff Killion, the dean of health services and sciences, said, “[Shimadzu] is known for giving to communities. The company funded seven machines to Centennial Hall, including fully functioning x-ray machines.”

Chandler explained the impact of the recent merge of the B-Line – Laerdal Company.

“B-Line is our corporate sponsor which means that we will be their beta test facility. With the geographical location [of Wichita Falls], the company wants to show clients what they did with [the university]. The company wants [MSU] to be on top because they want to use us as an example,” Chandler said.

The simulation centers take up a majority of the floor with realistic hospital rooms and mannequins serving different purposes.

“There are eight beds on the second floor and sixteen on the third floor [with functioning models and mannequins].”

These models range from junior boys to mature pregnant women.
With four floors of labs, simulation centers and classrooms adding up to over 250 rooms and areas, Centennial Hall provides classes with the latest medical technology within its health science fields.

Maggie Smith, an athletic training junior, said, “We have access to many new tools including a virtual anatomy table that gives the student a more comprehensive view of the human body which is something that is much more difficult to grasp in the classroom setting.”

Students work in an interpersonal setting, allowing them to not only improve their health care training but also through patient-centered care. While the students will be impacted by Centennial Hall’s machinery, they will also be able to connect and work closely with other students in the health sciences.

Smith said the new equipment and close convenience will allow the different health science departments to interact with one another.

The equipment available provides the health science students with an experience that can assist them during their future professions.

“What I love about [Centennial Hall] is that cutting edge equipment prepares you better so you will be a better job candidate,” Shipley said.

Shipley continues comparing the new building’s technology to the kind offered in the mass communication department in the Fain College and explained how having access to the technology needed in their fields can potentially influence their qualifications.

“[Students] will be better candidates for those jobs because [they] have good equipment to work with,” Shipley said. “You apply that to all of those professions; the students are all going to walk in [to their professions] and be better qualified. It’s not all about the buildings but it can make a big difference.”

Craig said she agrees that the equipment will better qualify her for her future.
“This new equipment gives us the opportunity to use equipment that we will see when we go into clinical and when we graduate,” Craig said.

Students will be put in real-life scenarios alongside their peers, allowing them to work in an environment that requires teamwork and gives hands-on experience.

Killion said, “This building is advanced, and students will learn on the latest technology. This will prepare students for their professions, providing interdisciplinary skills; the key is to live and learn as a team. This kind of experience will allow the students to provide a better service for the community.” 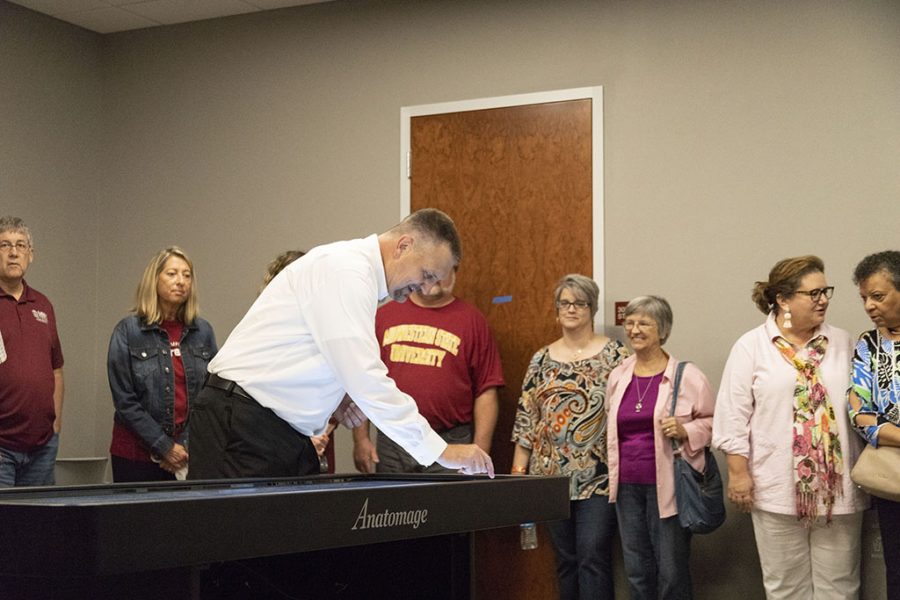