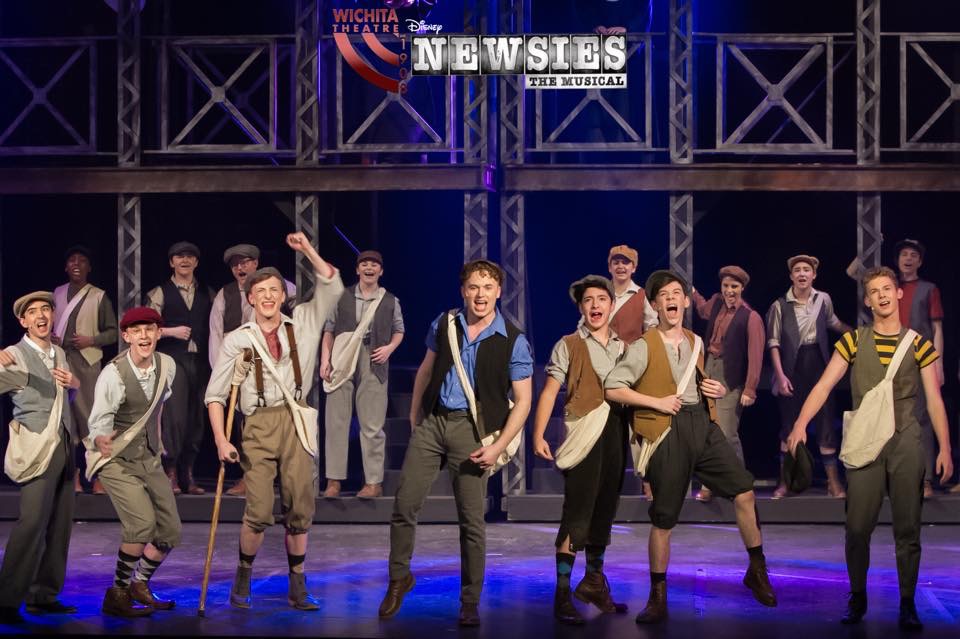 The Wichita Theatre musical production of ‘Newsies’ on Jan 8 was recorded-breaking, drawing in 300 people on opening night.

The audience was filled with families and couples from all around the area. The emotions expressed on the audience’s faces express just how engaged they were with the musical’s storyline.

The musical Newsies is based on the 1992 film about the historic newsboys’ strike of 1899 in New York City.

Bryson Petersen, English junior, plays the lead role of Jack Kelly a newspaper delivery boy who is the frontman of the revolution and love interest of character Katherine Plumber.

Petersen said, “We broke two of our own records with this show: most pre-sold tickets, and the highest attending opening.  We all started working on this show around the end of October. We focused really hard on the music and dance numbers. We had special dance rehearsals at Dance, Etc.  led by Stephanie Mendewalt and Caitlyn Minuto. Then we hit the stage in early in January to put the show together. You could almost physically feel the energy in the room. Everyone else in the cast felt it too. One of the tricky things about being an actor on stage is balancing the adrenaline of having a great audience with the techniques and discipline of not messing up, especially since I’m on stage almost the whole show belting high A notes.”

This isn’t Petersen first show with the Wichita Theatre.

“I started at the Wichita Theatre when I was 13, and I’ve been here ever since. I’ve been a staff member here for a little over five years. Theatre has had a huge impact on my life. It’s my career and my passion,” said Petersen.

Two alumni were involved in the musical.

Newsies is the Wichita Theatre’s first show of the 2019 season. The Wichita Theatre has been around since their opening in 1908. The first Broadway show performed at the theater was ‘Charlie and the Chocolate Factory,’ in May 2002.

Luke Draper, alumni, said, “Opening night’s performance was stellar. The audience truly does help us set the tone, and we couldn’t have had that energy without that support from them. My favorite part of opening night was the support from the community and all the love they gave for the arts.”

Draper plays the supporting role Davey, the older brother of Les who both play main contributors to beginning the strike against the publishing company.

“Theatre is an important part of my life because it truly has taught me how to work well with others. It has pushed me to my limits, humbled me, and given me confidence that nothing else could have. I also enjoy making people laugh and smile so that’s also awesome to be able to provide joy to people,” said Draper.

Bonnie Gunter alumni, along with the 16 others play as Newsies, the paperboys working in New York City in the musical who dance and sing throughout the show.

Gunter said, “There’s satisfaction in hearing people respond well to all the hard work the cast has put into this show. I loved the reactions of the kids in the cast. They were fired up and it was great. They were so proud of themselves and they deserved the standing ovation at the end of the show. Overall it was a great performance and I’m happy to share the stage with every single one of these people.”

Nicholas Brown, actor said, “My favorite part of the opening night is the amazing energy not only backstage with the cast but also within the audience. We were all already excited and ready to go for opening night. Having a captivating and such enthusiastic audience just makes the night so much better.”

Brown plays Spot Conlon’s character the leader of the Brooklyn newsies who come to assist the other newsies to revolt against the high distribution cost of the newspaper.

“Everyone was tired from tech week and still was able to give 110 percent this weekend and it definitely showed. Theater allows me to be surrounded by a group of individuals who I can be myself around without concern of being judged. Everyone in theater is so unique and weird in their own way and I love being a part of that,” said Brown.

There was a diversity in the performances throughout the show. With a cast of 55, the talents were varied, including singing, dancing, tumbling, and tap dancing.

Rachel Royal, athletic training junior, said, “This was my first time seeing a production at the Wichita Theatre and as a fan of musicals, I can’t wait to see future productions. I loved the show and was very impressed with all the incredible talent of everyone who took part in the musical. I enjoyed the storyline of the musical and all of the energetic and motivational songs.”