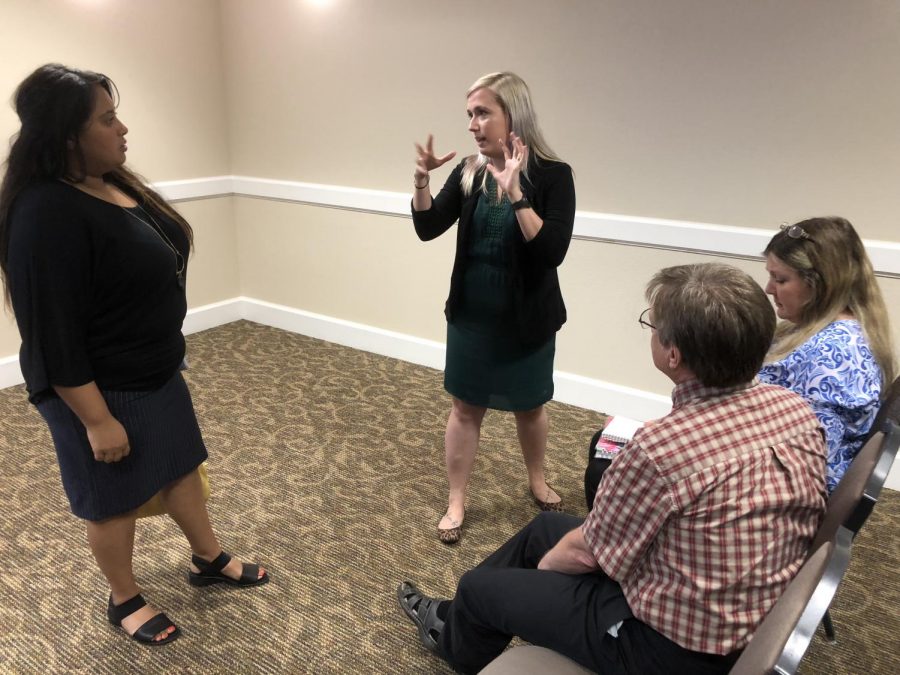 As part of an effort to streamline and codify policies and procedures related to sexual harassment on campus, the Board of Regents, in August, approved the creation of a new position, Title IX coordinator, a position previously held, in part, by Dean of Students Matthew Park.

In addition, the Board approved hiring Rachael Fornof to fill the position.

Student Affairs and Enrollment Vice President Keith Lamb introduced the changes to sexual assault procedures in section 7, at the last Board of regents meeting and said the policy for sexual assault hasn’t been changed but the way that it is approached has.

Lamb said, “A lot of this began with an audit that the university contracted to have done. We had two done, we had one on title IX compliance and one on Clery Act compliance. Those audits occurred over the spring and summer of 2017 and we received our report in the fall of 17.”

Following this report, administrators also began working on a Title IX handbook. There are two different policies, one in the student handbook and another in the employee manual. Now that the section 7 procedures have been changed administrators plan to work toward making a singular policy for both faculty and students. They are also getting the opinions of the different senates on campus. This includes the Faculty Senate, Staff Senate and the Student Senate.

Lamb said, “It (the new procedure) does a better job than our previous section seven of outlining the actual steps of an investigation and resolution. I think before it was a little to complicated the way it was laid out.”

With the new procedures there is also a mediation option for more minor incidents. With this the Title IX coordinator or an appointed person will help mediate between the complainant and respondent. This option is only available for Title IX issues.

Lamb said, “Mediation can only be utilized for lower level cases that are neither criminally or civilly actionable and do not involve non-consensual intercourse or non-consensual contact. If the complainant wants to pursue mediation we can do that but in higher level cases we can not do that.”

Getting a Title IX coordinator was already set for Sept. 1, but after last spring’s sexual assault forum, administrators decided to up the timeline and got one before the start of the school year. Now that there is a Title IX coordinator different events pertaining to sexual misconduct and the procedures to get in contact with her are being made more clear.

University President Suzanne Shipley said, “We sped it up and made room for the extra position because we really felt that we needed to be out in front of students with a single voice from an expert in the field who doesn’t have a lot of different responsibilities. We wanted to isolate the position so that students knew a simpler way to get help and someone was thinking about programming to prevent the needing to get help.”

With the isolation of the position Fornof has two main things she oversees, preventative programing and the compliance of the Title IX procedures.

Fornof said, “There are two parts of my job one of them is student outreach and preventative programing and really getting in touch with students in terms of education and then there is the other part which is compliance and actually following through with reports that are made.”

Students also like the fact that the position is being isolated and has more of a focus on Title IX issues.

Maggie Wyatt, sociology junior, said, “Having a Title IX director whose sole focus is Title IX issues is a positive thing. It’s important for our student community to feel that their concerns are given the attention they are entitled to, and I hope that comes as a result of having this new position.”

Fornof also said she really wants to get students educated and excited about preventative programing with whatever means. She has already put up posters in the women’s bathrooms around campus with information on how to get in touch with someone who can help with issues pertaining to Title IX.

Fornof said, “Reports come to me in a variety of ways. Faculty members can also receive reports so they can come from a variety of areas and once a report is received then the intake process starts and the intake interview is just a chance to meet me and I meet the complainant we kind of go over what the process is going to look like and from there I serve as kind of a gatekeeper of whether or not it will go through to a full investigation.”

Fornof has a law degree from Pennsylvania State University and while at school she helped with programing. This gives her a better understanding of what kind of things students would be interested in and have an easier time interacting with them. She also has a law background and has experience in Title IX cases.

What she said she likes about Midwestern State is that they are trying to pull in people from different backgrounds and not just people who have worked in a university.

Lamb said, “Rachael has a really unique background which was attractive to us. She has an intimate familiarity with obstacles that face both victims and respondents to these types of crimes and understands the legal process and has a very good understanding of services that are needed and how to talk to students and how to help them.”

Lamb also said Midwestern is lucky to have someone with Fornof’s enthusiasm and the ideas she brings to the table. Out of all the things she has implemented the new app may be the quickest and easiest way to get information on how to deal with a sexual assault or other title IX issues.

Shipley said, “My favorite thing is the new app. I have it on my phone. The new safety app I think it is tremendously helpful because it gives you in a simple package the range of support structures we have for students. I think our problem before was ‘who has time to wade through 10 pages on a website’ and this packages it in an easily accessible way its not little, there is a lot of information there but it organizes it so you can choose what you need.”

Students like biology junior and PRIDE member Zaquera Wallace said, “We’ve been told she’s very excellent at what she does and we are excited to work with her. As a protected group that falls directly under title IX it feels great to have someone who will meet with us and let us know that we are welcomed here.”

She said she is excited to see that changes that will be made by having a new Title IX director.