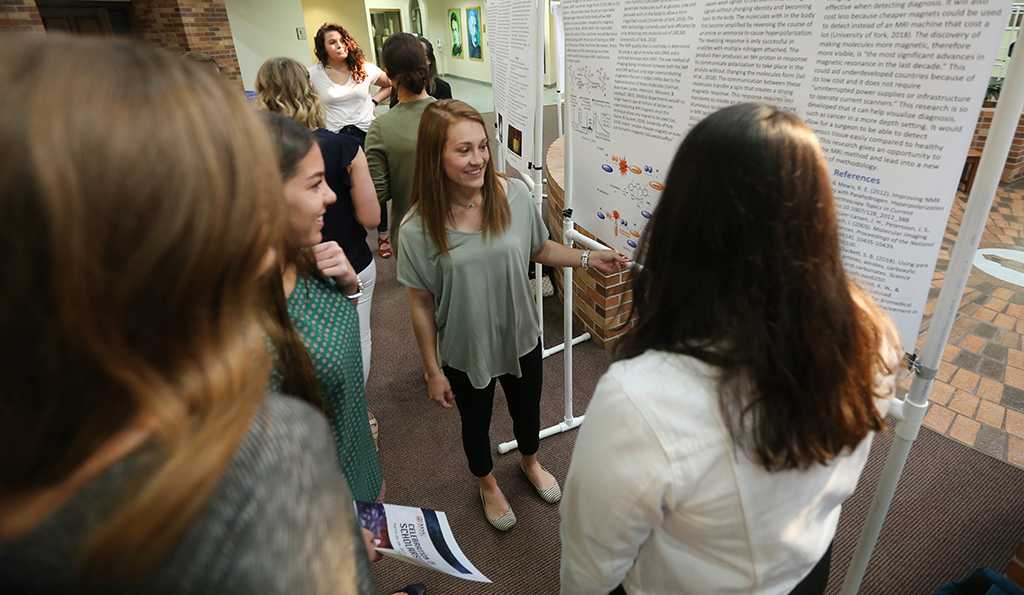 EURECA proposal on Russian literature one of 27 awarded for fall

“It was actually not my idea. It was a professor’s,” Riggs said. “She wanted to translate another Russian book and asked me to help. We did really well throughout the semester and she asked me if I would like to [continue] to help and I told her ‘Yes’ so I wrote the proposal [after the EURECA forum].”

And this fall, Riggs’ project, a continuation of her project from last spring, was one of 27 approved for funding as part of fall EURECA program.

Kirsten Lodge, associate professor and humanities project coordinator, is Riggs’s mentor and prompter for her EURECA research. Lodge said she became interested in Russia and Russian politics in high school then majored in Russian literature as an undergrad student in college.

“I decided to learn Russian [while] majoring in Russian and Soviet studies,” Lodge said. “Lane has been helping me with the background materials with the Soviet dystopian book called We. She’s been a student of mine for a while and I took her to a conference called ‘The Association of Cortex and Courses’ where I found that we worked well together. She’s very good at taking advice so she was my top choice when I was looking for help with this project.”

Riggs said when the EURECA forum was coming up she was nervous because of the numerous people who came to see her present her work.

“I felt a lot of relief when I had finished my work,” Riggs said. “I was very proud of my poster. I went around and listened to others’ presentations and I noticed most were math and science posters, so I thought it was really good that I was there as one of the only english posters to kind of even it out. I didn’t get a lot of feedback when I presented at the forum, but when I sent in the proposal [in May] and received my rating, high scores and acceptance that was great.”

Magaly Rincon-Zachary, biology professor and director of undergrad research, said when reviewing proposals a rubric is used for evaluation of the proposal and application sent in from the student.

“It’s putting numbers to the qualitative part of what this is so there is a final score,” Rincon-Zachary said. “The rubric is based on 28 total points and the minimum to be accepted into the program is 23. Based on that score, we rank the students’ work and that is how we award the scholarship to students.”

Lodge said continuation of interest in helping research the background of this book was Lane’s idea.

“I really like that she’s very enthusiastic about trying new things,” Lodge said. “I wasn’t surprised when I heard she was one of the chosen students to be awarded. She’s reliable, a good researcher, she always came up with something and will make for an excellent grad-student. I’m encouraging her to start work on her own project as well.”

Rincon-Zachary said Riggs presented a hard project because of its basis on early Russian literature and the history that is involved with it. She said her impression of Riggs is she enjoyed researching this topic and was acquiring research skills in the process.

“Lane helps Dr. Lodge accumulate research that is not easy to find,” Rincon-Zachary said. “Whenever you translate from one language to another there is some interpretation where language has evolved with time. For example, when a popular phrase meant something 100 years ago, it may mean something else today. It’s very complex work and requires a lot of involvement. Students are not experts, but they are learning to be experts when practicing these kinds of skills.”

Riggs said she decided to join the EURECA forum and send in a proposal because she finds importance and value in campus involvement.

“This [EURECA] is one of the things that I hadn’t done yet and I thought would be good to get under my belt and learn how to be more analytical,” Riggs said. “We all know how to use a library, but I learned how to really take advantage of it. So it’s good to focus on things outside of the classroom because you can learn a lot more from it than you think. Being involved in this has given me a sense of accomplishment since I did well in it and it feels good that I am able to read information and make something out of it.”