Mass Communication sophomore Juwan Johnson completed a pass at the football game against Humboldt at Memorial Stadium on Sept. 1. Photo by Britnni Vilandre

The football team comes back defending their title for their opening game with a 55-12 win. On Sept. 1, at Memorial Stadium, the football team held their first home game of the season against Humboldt State University. The team proved that they are still 24 strong and the returning undefeated LSC Champions.

“Honestly I haven’t had that feeling in a while, first thing that came to my mind was my fallen brother when I scored, I just thought of him he blessed me with the opportunity to be open and in the end zone. So, I just wanna thank him. I’m really confident as far as the whole team going through the summer with the preseason camp, we’ve become closer as team, our brotherhood is so strong right now that we can go all the way,” Bryce Martinez, sophomore criminal justice and wide receiver, said.

The first quarter started with a 75 yard touchdown within the first 10 seconds of the game by Vincent Johnson, mechanical engineering senior. At the 7:17 mark, we moved into the red zone. The following play Xaiver Land, wide receiver criminal justice junior, fumbled the ball. But, at the 6:11 mark, he managed to get in the end zone for a touchdown. With the extra point kick completed, the score was 14-3. While on defense, Josh Wydermyer, sports and leisure studies senior and defensive back, covered the ball to put the ball in MSU’s position. This helped Bryce Martinez gain a touchdown making the score 21-3.

“[The win] felt good, I already knew we were gonna do it, so we just had to go out there to do everything we could to secure this win. We watched a lot of films, practiced everyday, you know we have to trust the coaches everyday,” Johnson said.

At the 10:41 mark of the second quarter Layton Rabb, quarterback and accounting senior, completed a pass to Martinez for a touchdown, bumping up the score to 28-3. At the end of the second quarter, the team moved to the in yard line, the following play they were able to score. The score at half time was 42-3.

Sir’Vell Ford, criminal justice senior, said, “Of course a win is win so I just feel like we have to continue to keep our head focused and continue to do our play. [We practice by doing]  a lot of film and a lot practice.”

On defense in the first quarter Marcus Wilkserson, defensive back and computer science junior, made a clean tackle at the 10:55 mark. With 7:34 left in the quarter, Alec DiValerio, defensive back exercise physiology senior, sacked the quarterback. At the 5:45 mark Nicholas Gabriel, running back and criminal justice senior, made a 35 yard run down field. After the run Kylan Harrison, wide receiver sports and leisure studies, completed a pass for touchdown . The score at the end of the quarter was 48-9.

Four minutes into the fourth quarter Sam Frederick, wide receiver and mass communication junior, he made a touchdown making the score 55-9. At the 10:25 mark the defense sacked the quarterback. With two minutes to the game Jaylon Abdul-Karim, defensive end and criminal justice, sacked the quarterback the last time during the game. With one minute to spare Humbleboldt State managed to get a field goal making the final score 55-12.

Jaden Cunigan, criminal justice sophomore, said, “I feel like we got a good season ahead of us, we just gotta keep playing together and play smart.”

The football team will continue to defend their title next Saturday Sept. 8 at memorial stadium. The team will take on West Florida with a successful start to the season. 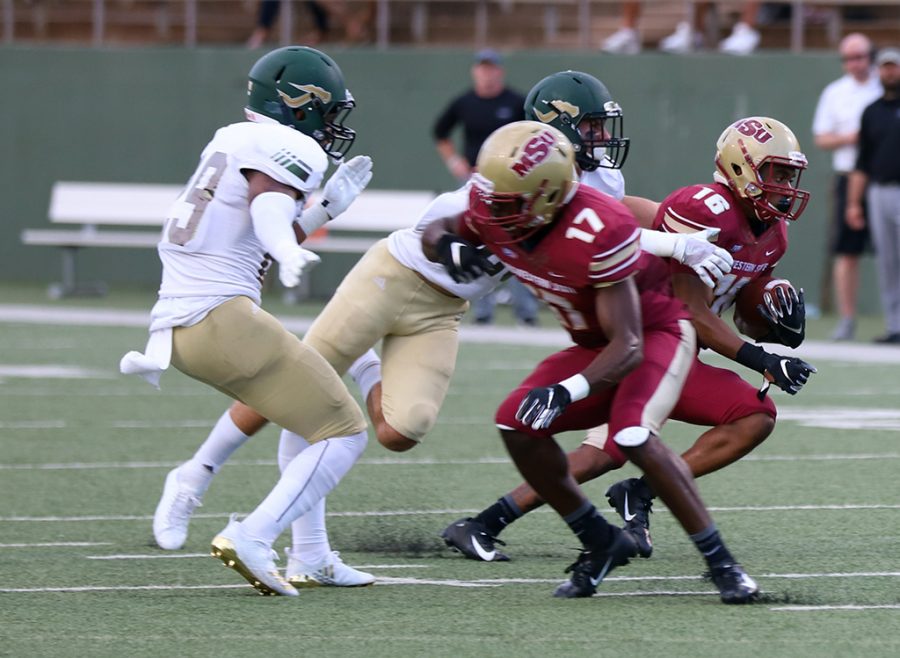