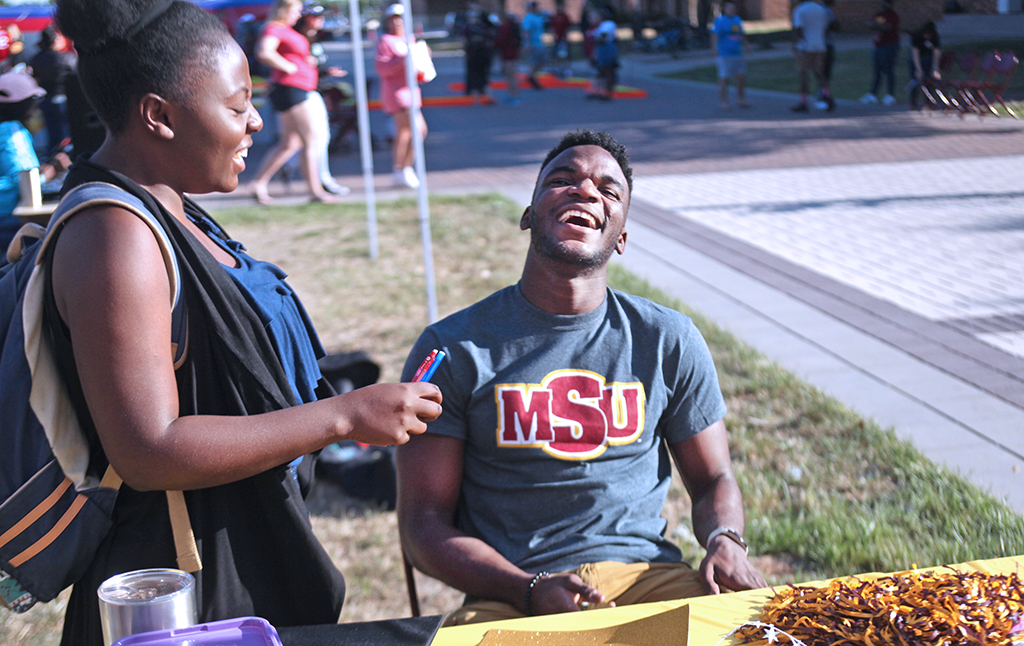 Mechanical engineering seniors Israel Ezeodum and Chenai Sukume share a laugh just before getting started on their graduation cap designs at Finals Frenzy on May 4, 2017. File photo by Timothy Jones (Timothy Jones)

Mechanical engineering seniors Israel Ezeodum and Chenai Sukume share a laugh just before getting started on their graduation cap designs at Finals Frenzy on May 4, 2017. File photo by Timothy Jones

Studying for finals means staying up late, not getting enough sleep and stressing about passing classes.

To give students an opportunity rest from all stress that comes from finals and to have some fun, the University Programming Board is hosting a Finals Frenzy May 3 in the Jesse Rogers Promenade.

Ruby Arriaga, UPB adviser, said, “It’s free for students to de-stress before they take their finals. And it’s also a way for the campus to come together. A lot of the organizations or offices have come together for Finals Frenzy to put this activity on for the students.”

Arriaga said this semester’s Finals Frenzy doesn’t have a theme, however, the name is self-expressive because of all the different activities being hosted.

“The point is, there are a lot of different activities going on like a frenzy,” Arriaga said. “It’s for students to have a wide variety of de-stressing events for them to have fun. So there’s not really a theme and it kind of helped because there’s so many things going on for different types of students.”

In comparison to the other main events hosted by UPB, Arriaga said Finals Frenzy is one of their most popular events by far.

“This is one of our biggest events so we anticipate 200 to 300 students that attend,” Arriaga said.

After the success and turnout from the previous years the event was hosted, members of UPB have made Finals Frenzy a tradition.

“It’s always going to be something. I think [people] always wait for this event because it’s the last hurrah before finals,” Arriaga said.

“I had a lot of fun at the Finals Frenzy last semester, but I wish that it was more spread out, so instead of being just one day, it could be an entire week of activities,” Cantrell.

Christopher Sun, pre-med freshman, said he isn’t going to be able to attend Finals Frenzy because he has an exam at that time.

“I didn’t go to the Finals Frenzy last semester because I had an exam and I won’t be able to go this semester for the same reason,” Sun said. “It would be cool if they had it on a Saturday whenever there isn’t any classes.”