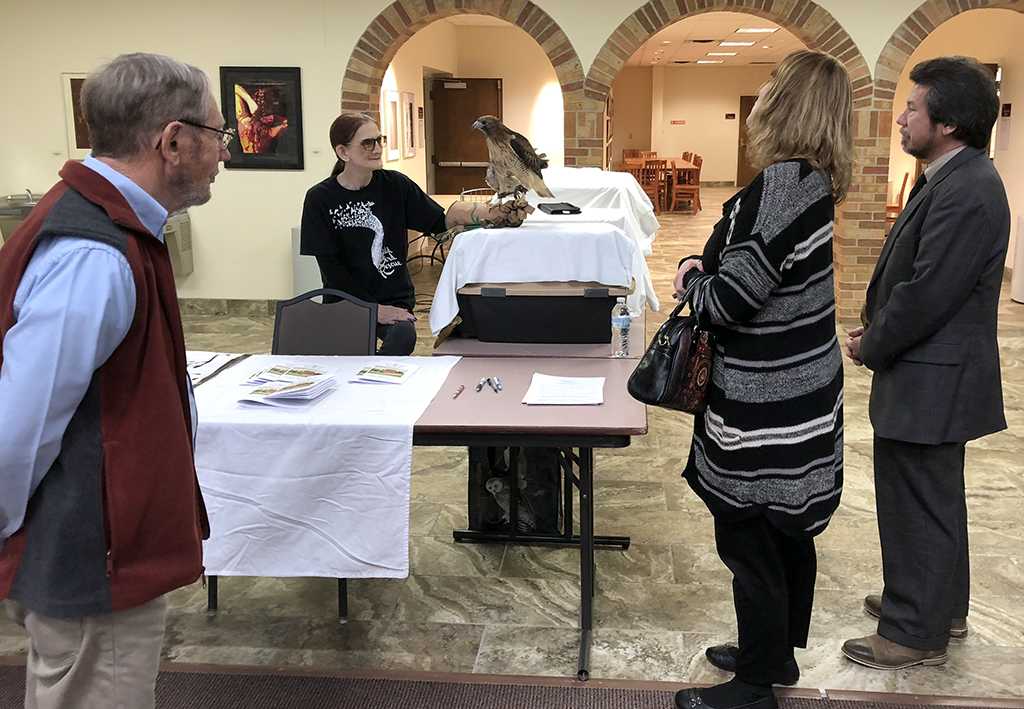 People gather around the Wild Bird Rescue table where they had an owl at the earth day fair in CSC atrium on April 19, 2018. Photo by Miguel Padron. (Miguel Padron)

People gather around the Wild Bird Rescue table where they had an owl at the earth day fair in CSC atrium on April 19, 2018. Photo by Miguel Padron.

In preparation for this year’s upcoming Earth Day on April 22, members from the Environmental Science Organization and the surrounding community hosted an Earth Day Fair on April 19 in the Clark Student Center Atrium to celebrate Earth’s natural beauty and to educate the public on how they can help preserve the planet.

Laura Clepper, park ranger for Lake Arrowhead, said, “I like to think everyday as Earth Day, but it is good to have a day for the community to promote going outside.”

As a park ranger, Clepper instructs hikes and activities at Lake Arrowhead. For Earth Day on Sunday, she will be leading a hike toward the north of the lake while also picking up litter.

Daniel Rosales, criminal justice junior, said he was interested in attending the clean up hike at Lake Arrowhead.

“Earth Day is about bringing awareness to our environment to people who take advantage of its resources. When [a disaster happens] we get involved, but until then it’s someone else’s problem. Those who came to show their support with displays inspire me to take the proper steps for conservation,” Rosales said.

According to a pamphlet given out at the fair, the purpose of the event is to persuade attendants to care about the environment.

Kameron James, geoscience sophomore, said, “Being a geoscience major [means being someone] who studies the Earth’s water sources, atmosphere, soils and how living things, including humans, interact with the Earth. Earth Day has a huge affect on my future career. If the Earth is not taken care of the right way, what will geologist be left with to study?”

One of the displays at the event was the Texas Parks and Wildlife Department’s Inland Fisheries Division table. They are responsible for managing the state’s diverse freshwater fisheries resources. The goal of this management is to provide the best possible angling while protecting and enhancing freshwater aquatic resources.

Rosales said, “I learned the most from the inland fisheries’ [table], such as the different types of fish in the area.”

Natural Grocers put in their part for the event by having a Lady Bug Love Pledge, in which they asked attendants to never use chemicals that harm ladybugs or other insects on their lawns or garden and to support 100 percent organic produce. They provided an organic apple and a bottled water free of pesticides to show those in attendance the foods that still taste good without the harmful effects of chemicals.

Staff at Natural Grocers also made people in attendance aware of the upcoming health opportunities they will be facilitating.

Hemali V. Marthak, nutrition health coach, said, “I will be having a nutrition lecture at Natural Grocers on April 28, noon, where I’ll be discussing cravings, weight gain and the blood sugar rollercoaster.”

Along with the different displays were live and stuffed animals. There was also a raffle set to persuade passer-by to engage into the event with the prizes being a mountain bike, wildlife camera, a Natural Grocers “swag bag” or bird houses. To enter the raffle, students had to go to seven different booths and get stamps from the facilitators of the booths.