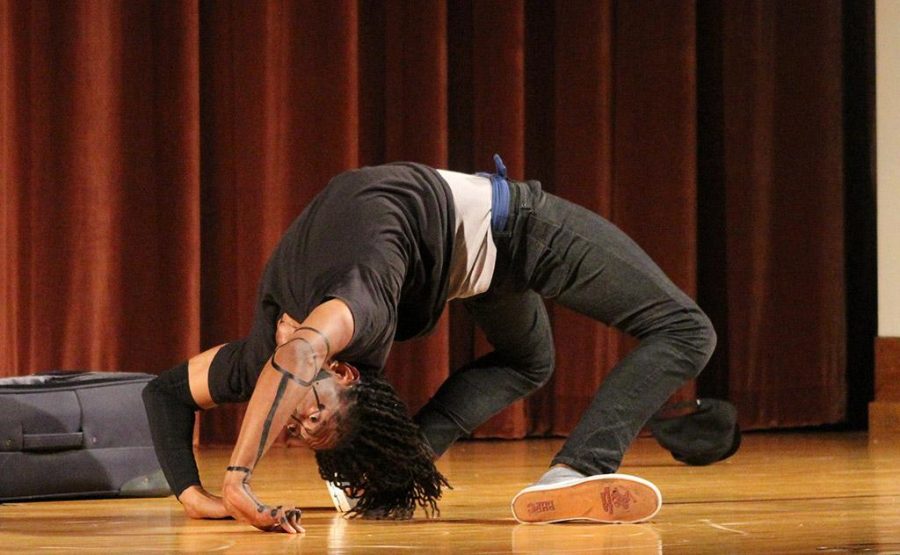 Edward Collins, psychology freshman, bends backwards in the talent portion of the the 2017 Mr. and Mrs. Caribfest in Akin Auditorium on Sept 28. Photo by Marissa Daley

Àlex Martínez Roca, taps his foot nervously against the airplane carpet floor as he takes his first look out the window of his new home for the next four years. After living in Barcelona, Spain his entire life he doesn’t know what to expect when coming to America to play college tennis. However, after having his first college experience at Midwestern it was all worth it in the end he said.

Roca, said, “My first year has been really good. The first semester was pretty difficult for me since I didn’t know a lot of English. I couldn’t understand my professors very well so I was really lost. But the second semester was a lot easier because now I understand everything.”

For international students traveling to America for their first year of college, the transition can be different.

Jean Muniz, finance freshman from Brazil, said, “Life in America is very different from life in Brazil because of the different culture. People in Brazil are more friendly. The food is also really different here, I am still getting used to it.”

A piece of advice that both Muniz and Roca suggested for other international students wanting to study in America is to learn a lot of English.

“I would tell them to watch a lot of English movies. Also take english classes so you get used to speaking english to other people,” Roca said.

When trying to make new friends, Muniz said it can be difficult in the beginning to socialize with other students on campus.

He said, “At the beginning it’s kinda hard to socialize with people. But if you’re apart of a team or you join a sorority or fraternity it helps you make friends. Also go to the different activities that are offered on campus like soccer games. Personally, I met a lot of people going to yoga.”

For a number of college students, it can be a big change to leave their family and friends behind Roca said.

“I talk to my family every week over Skype or I just call them. And yes you miss your family and your friends but you’re really busy so you don’t think too much about it,” Roca said.

Both Roca and Muniz said if they could change one thing on campus it would be the food. 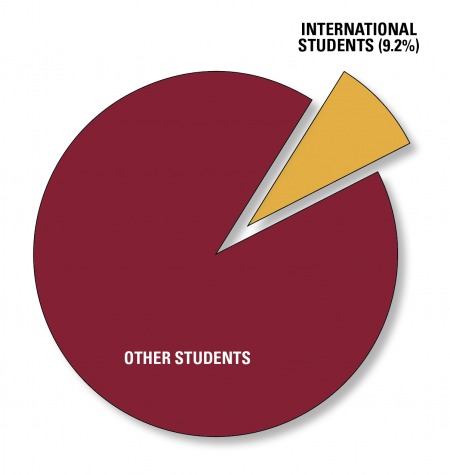 “One thing that I would change is the food,” Roca said. “I would love to eat healthy and have Spanish food here. For example, paella, which is a dish made with rice, shellfish, and tomato sauce. In Spain, I live close to the ocean so seafood is one of my favorite foods.”

Overall, Muniz said his first year in the United States been pretty good.

“It’s been very busy with my classes but the challenge is worth it in the end,” he said.

Randy Glean, director of International Services, said out of the 6,080 students enrolled on campus, about 560 of them are international from 54 different countries.

“I think we are well above average. We have just about 10 percent of international students here. We are actually more adverse internationally than most schools our size,” Glean said.

From one country, the largest number of students are from Dominica Glean said.

He said, “Generally the biggest program is the Caribbean.”

Over the past five years, Glean said there has been an increase of international students. 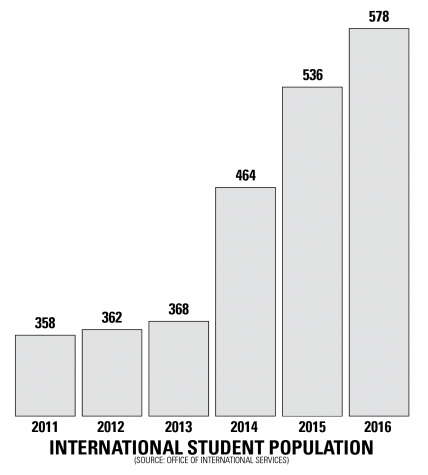 However Glean said he doesn’t believe that it will continues to increase.

“I strongly advise students, who want to study to choose the United States. For Midwestern, if it fits your career goals and aspirations then it’s a good choice,” Glean said.

For the students who are not native English speakers, like Muniz and Roca, Glean said Midwestern offers an Intensive English Language Institute.

How much does it cost to apply for Midwestern as an international student?

The application fee is $50 for both graduates as well as undergraduates.

How will international students know when their application has arrived?

Students should be contacted after their application has arrived with a request for documents or an admissions letter if their file is complete.

Can students email their application, transcript, or test scores?

Yes, Midwestern will perform an evaluation based upon those. However, students with have to get official documents sent directly from the school or testing center prior to receiving a form I-20.

What are the test requirements?

Beginning freshman students require SAT or ACT. Graduates require GRE or GMAT for the MBA program. Other students from a foreign language based education medium will require TOEFL, IELTS, or ITEP scores.

What is IELI and how long do students have to attend?

IELI, stands for the Intensive English Language Institute. Students, typically only have to attend one semester. However, it may take longer if the students hasn’t reached the requisite level of language competency.

How can a students transfer their credits from a different institution?

Students should send their credits from a previous school to be evaluated and determined for the applicable credits.

How much does it cost for an incoming freshman from overseas?