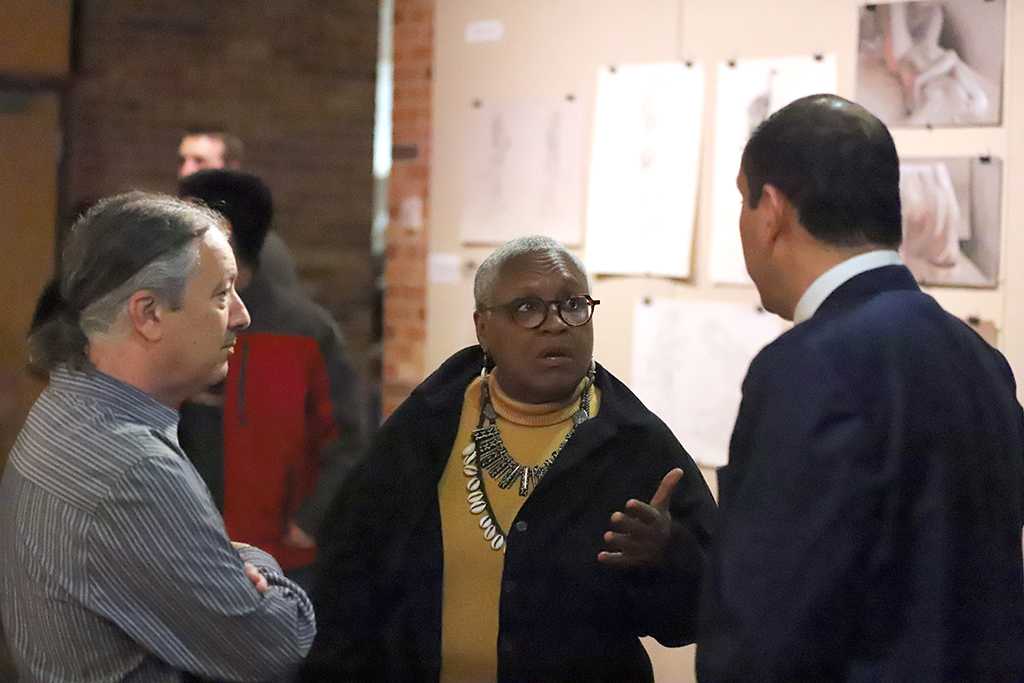 Meek focused her latest pieces on her recent surgery and unpredictable health status. More than just the surgery itself, Meek focused on the unexpected hardships and the “sudden had-to-deal-with stuff” that accompany healing that shocked her inspiration.

“I’ve never been seriously ill,” Meek said. “I was not on any medications, so it was a shock of, one, having my thyroid removed, which I didn’t realize regulated everything. Then, two, the after-effects of all of that which is all this that you see, going through all this pain and different things going wrong and that effect.”

Throughout her work, Meek carefully decided which materials would best represent the concept of vulnerability to her audience.

According to Meek, she chose materials that expressed vulnerability because that emotion connects humanity. Her art is displayed in shower curtains because “you are most vulnerable and naked in the show” and baby blankets because “who’s more vulnerable than a newborn baby?”

Every piece represented a step throughout the process of her journey, not only spiritually but emotionally, and Meek said art like this helps relate to people on a deeper level.

“You really do just have to come to terms with the fact that your vessel is really unimportant,” Meek said. “It’s what’s inside of you. It was like that piece was about coming to terms with it’s not important what physically is happening to me as long as I got my spiritual self together.”

Although Meek said her work does not normally focus on her, she felt this was a great way to cope with what was going on in her life. With the Midwestern’s well-known nursing program, she believed the Fain Fine Arts building on campus was the best place to have her gallery opening.

“I wanted to show the work here because I knew they had a strong nursing program,” Meek said. “I wanted to talk to them because of their medical connections and the fact that it was nurses that really put me at ease. The nurses were the ones that sort of talked me through, you know like ‘this is gonna be all right, this is what’s gonna happen but it’s gonna be all right.’

To Meek, her goal as an artist is to inspire her viewers to find a deeper meaning in everyday activities, challenges and struggles.

“I hope that all of my work is designed to make people think more deeply about things,” Meek said. “In this case, I hope they think a little bit more deeply just about the way in which we occupy space and how important is the ability to overcome monumental things that can happen to you, but you got to go on and you should go on with strength and not let it weaken you.”

Gary Goldberg, professor and gallery director of the Juanita and Ralph Harvey School of Visual Arts, said he was excited for Meek to hold her show at the university due to the reputation of her work.

“When we talked about having a show here, it wasn’t the show I was expecting because she’s known for doing work that deals with the condition of the African American in this country,” Goldberg said. ” So it’s interesting that we got her here because of her reputation, but this is a new body of work and she wanted to show it, and we were excited to show it.”

Because she was required by her professor to attend the Juanita Harvey Art gallery and she had never been to a gallery before, Alex Blake, finance senior, said she was surprised by what she learned during the opening and found the experience “really neat.”

“It’s really cool because we asked her about that piece [The Diary Pages 1-7] and she told us it was about her experience throughout her cancer which is like really cool,” Blake said. “Seeing how she laid it out is really cool. This isn’t a place I would [usually] come to, but it’s actually really neat. It’s personal, so I really like that it tells her story.”

Blake said she feels she will be going to future galleries after seeing how much Meek’s gallery opened her mind.

“It kind of like opens you up to new things,” Blake said. “You get to talk to the artist and kind of figure out why they do doings in certain ways.”

Events like this allow more students to experience the artists throughout campus, and Goldberg said he encourages students to come out to the next gallery opening due to its numerous perks.

“They get to hang out with students, listen to really interesting artists speak,” Goldberg said. “It’s not like there’s a lot to do on a Wichita Falls night from 6—8 p.m. It’s a good place to hang out and meet interesting people and look at artwork that is challenging and provocative.”