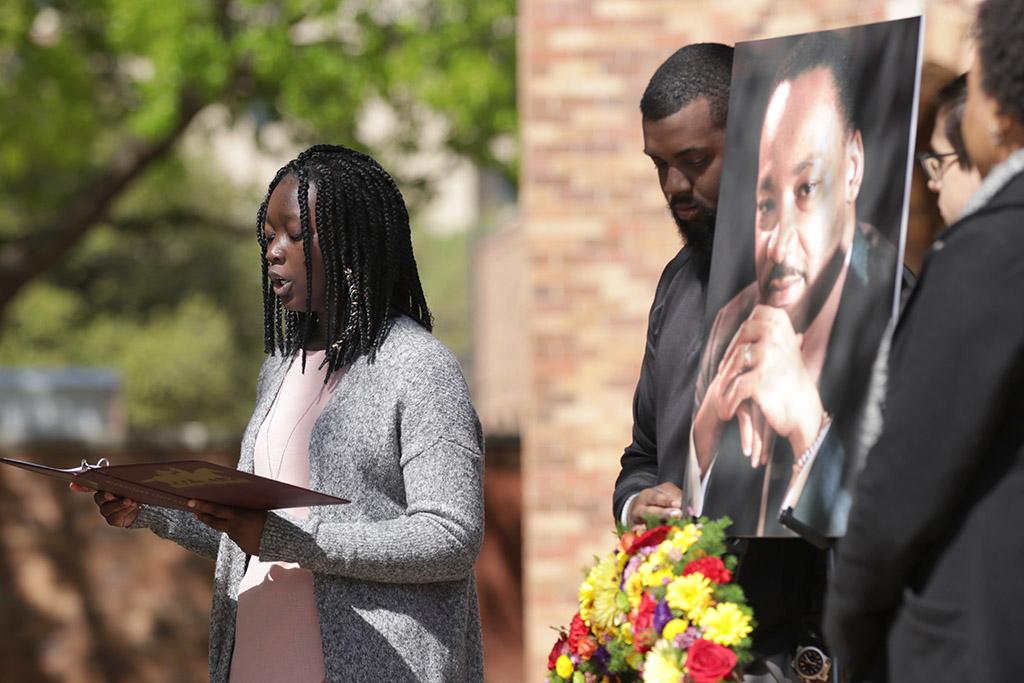 Anissa Jones, exercise physiology junior, reads life works of Martin Luther King Jr. for the 50th anniversary of the assassination of King outside of the CSC, Wednesday, April 4, 2018. Photo by Francisco Martinez

Campus officials and students commemorated the 50th anniversary of the assassination of Martin Luther King, Jr. by laying a wreath around the memorial plaque on campus just outside Clark Student Center on April 4 at 11:30 p.m. where 28 people attended. 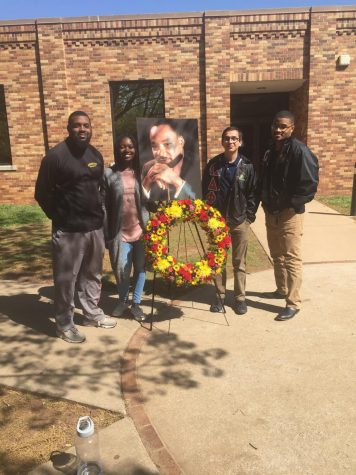 Christopher Cruz, theater production junior, said, “It’s not so much of commemorating that he died, but rather what he did and the legacy that he passed on through the younger generations.”

During the ceremony, Syreeta Greene, director of equity, inclusion and multicultural affairs gave a brief speech about MLK and his life achievements.

Greene said his death however doesn’t overshadow his life. Today is an opportunity to ask ourselves, how can we make a difference.

Greene said she believes that students need to better educate themselves on the teachings of MLK and his writings and speeches.

“[Students] need to become much more familiar with the advocacy that he was behind, and not get wrapped up in the trops of him being a man of peace and non-violence. Although that was his method of making a change, he certainly stood against and in opposition of lots of inequalities that he called out and that he attempted to address before he was assassinated.”

Greene went on to say people should focus more on what MLK believed and what his legacy stands for.

Greene said, “It’s important to think beyond the pedestal that people try to put him on because he certainly wasn’t a perfect man but he was a man of conviction who saw the systems that were in place to oppress people. And those were the systems that he was looking to dismantle.”

Lacy said, “It’s more so of a beacon, Martin wasn’t even done doing half the stuff he was trying to do to really just change the mindset of those people who has those really racial ambiguities. So for him to be gunned down where, at the time he was. We use the assassination of Martin Luther King, not just as an assassination, but the time period of his life that reflected seeing a change that he did as a leader. And we use that to basically change lives and try to change the mindsets of those people who view people who are different than them as inferior.”

MLK, along with a group of people across the world, were able to establish the Civil Rights Movement as a blueprint for how other groups, people, and countries go about making a change and advocate for what they believe in, Greene said.

“If you go to the Civil Rights Museum in Birmingham Alabama across the street from the 16th street Baptist Church, which is the church where four young girls were killed after it was bombed, at the end of the exhibit it shows several different movements that have happened since the Civil Rights Movement,” Greene said. “[They] used the Civil Rights a s a blueprint to how to make a change. So I think that it has been a useful way to making a change and it’s something that we continue to use because there is still more change to be done.” 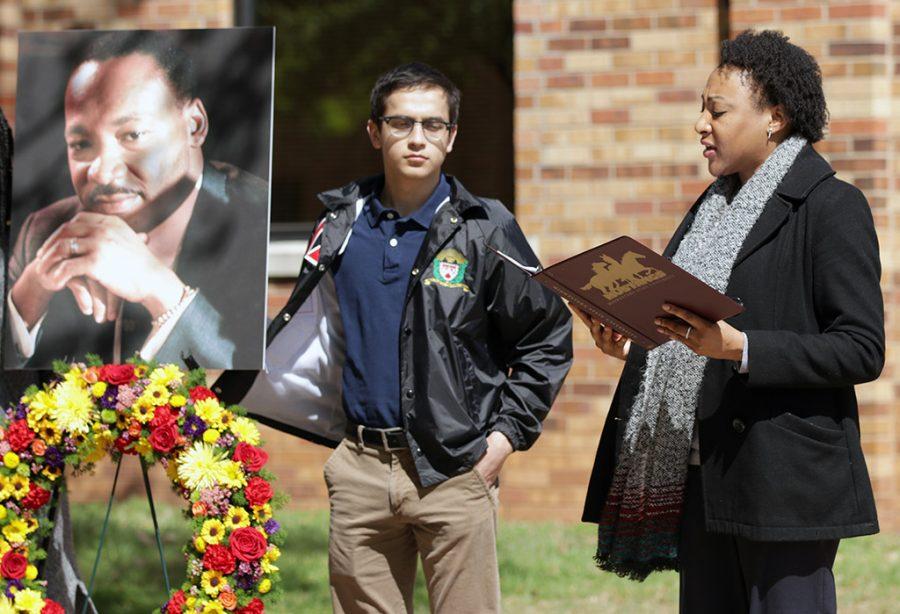 Gallery|8 Photos
Francisco Martinez
Syreeta Green, director of equity, inclusion, and multicultural affairs, welcomes guest for the 50th anniversary of the assassination of Martin Luther King Jr. outside the CSC to commemorate the life and death of King on Wednesday, April 4, 2018. Photo by Francisco Martinez