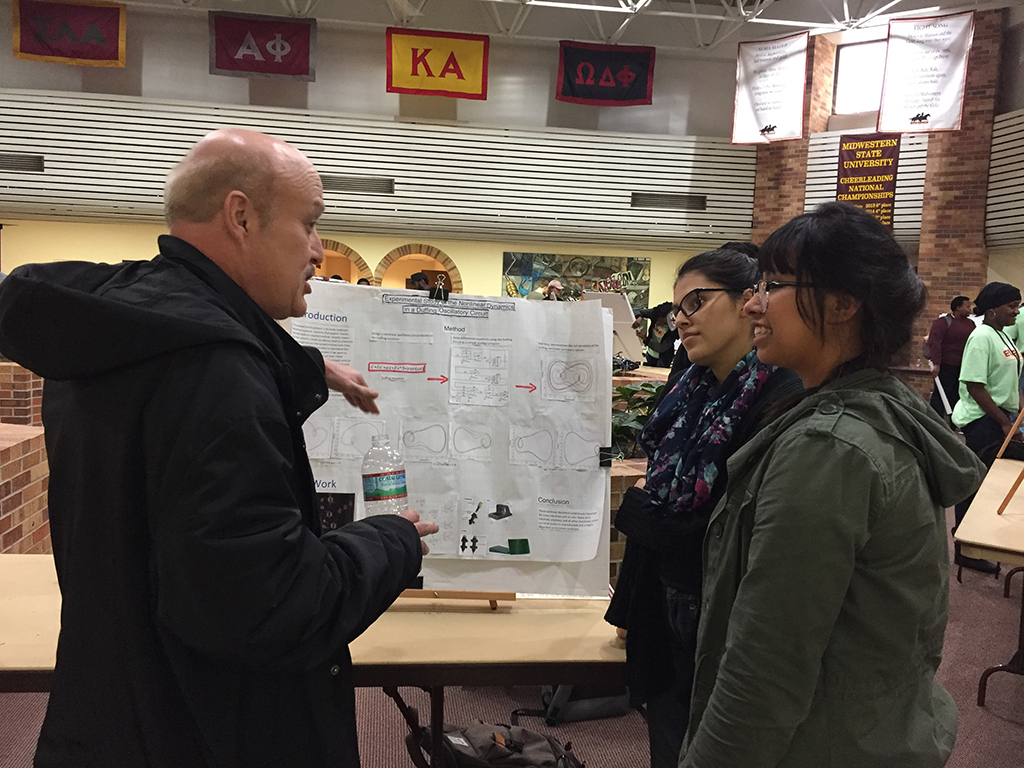 The Clark Student Center Atrium welcomed 44 students from six departments eager to share their recent research discoveries on March 28 at this spring’s Enhancing Undergraduate Research, Endeavors and Creative Activities’ Posters on the Go.

EURECA has been mentoring students to broaden their research and prepare them for future endeavors in their field of study since 2013.

Magaly Rincon-Zachary, director of undergraduate research, has been helping with EURECA for five years and said she saw the impacts it has on students.

Rincon-Zachary said, “When they go to present their work, they meet other students that are anywhere in the United States and occasionally international students. The students are able to network and establish those relationships. They are learning on their own guided by the professors, and learning networking and creating their own network.”

Biology junior Bethany Russell focused her research on what she is passionate about, and saw it as being something she hopes to continue after graduation.

“I actually just wanted to get involved in research period,” Russell said. “I’ve worked with challenged kids and I want to do research with clinical and actually apply it medically. I’ve seen a lot of kids that have improved through new age medications that are kind of on the border of medicine, and it’s what I want to do with my life.”

The experience a student gains from EURECA is what helps benefit them in the long-run, according to Russell.

EURECA allows students of various majors to have the opportunity to conduct their own research with the help of a mentor. Bilingual education senior, Montserrath Garay hopes that by being able to present their discoveries in front of students, students will become inspired to conduct their own.

Garay said, “If we present this to students around campus maybe they will get that urge to do a research themselves.”

Math senior, Vincent Rodriguez said he has attended EURECA events in the past in hopes of finding a presentation that interests him. This semester Garay’s research over bilingual education caught his eye.

“Last semester I did a research essay over the education system and how some of their laws/rules and schools/districts are not actually representing bilingual education in a sufficient manor,” Rodriguez said.

Rodriguez said he sees EURECA as an opportunity for students to be open-minded and listen to what other students have to say.

“It gives me a well rounded idea of that times are changing, there are lots of topics that are being discovered every single day, and that you just have to be open to these ideas,” Rodriguez said. “Maybe one day you’ll find yourself in a position where you’re actually taking what they said and teaching it to someone else.”

Garrison Horton, english senior, said he was mentored by associate professor of English Kirsten Lodge on the literary movement called Decadence, “looking for influence from Russia to England and France.”

“So, what we’re looking for is just a backwards influence, an influence from [Leo] Tolstoy and [Fyodor] Dostoyevsky to the likes of [Charles] Baudelaire or Arthur Simmons or any of those other English and French decadence authors,” Horton Said.

Horton is new to EURECA and said he enjoyed being able to express his passion for English and literature. Though he said he is unsure if he will participate in the upcoming semester, he feels he might in the future.

“I’ve only been participating in EURECA since the start of this semester,” Horton said. “For fun, I like books, I like English, it’s the thing that makes me feel good inside. I don’t think [I will do it] next semester, but I think in the spring 2019 I might do something on Punk Rock and Romanticism.”

Rincon-Zachary has been a professor for 26 years and said he enjoys building the professor to student relationship into friendships, making it easier for students to relate and learn more about their field.

“The professors help them to grow and to develop their project,” Rincon-Zachary said. “We are their mentors and they are our mentees. The program is based on those relationships and not only is it professional, but sometimes it becomes like a friendship. At a professional level, it’s very gratifying and even at the personal level, seeing a student that becomes my friend and they have gotten their PhD’s now we are at the same level. It’s so different and it’s so enjoyable.”

With events like EURECA, students are able to dive deeper into their field and create a more hands-on learning experience, and that is the ultimate goal according to Rincon-Zachary.

“The goal is that everyone at Midwestern will graduate at-least with one signature experience,” Rincon-Zachary said.